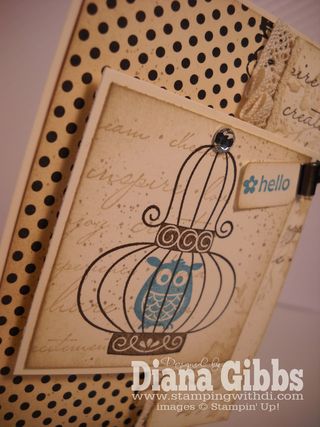 I wish I could remember who told me to read "The Passage" my memory is horrible, if it was YOU…thank you so much, I am really enjoying it, and even more so since it is on my Nook.  In fact, I am enjoying it too much as I am not getting some housework done, so I am looking forward to the plane ride to Seattle…unless I get it done before then.  It reminds me a bit of Stephen King's writing.

Added: It was Margaret AKA Peggy that told me about the book…I love it! Thanks Peggy!

I wanted to show you the last little ATC card I have done, I will wait for the new catalog to finish the rest I am thinking.  I think this was based on a card by Kimberly Van Diepen. It was a picture I had in my stash that I wanted to copy and now I can't find it. 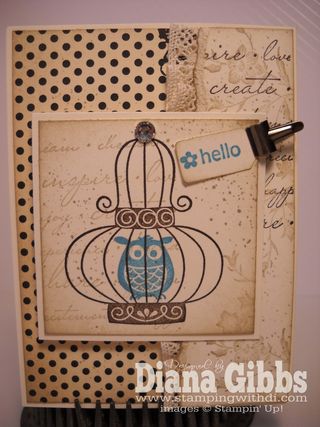 So if you did not see American Idol, please stop reading.  I will be quick with my critiquing tonight cause my danged old wisdom (of which I have none) teeth are acting up so I wanna take some advil and go to bed.

So can you believe it is the Top Four already? OMG! That means next week will be Top Three and the next week we'll be cruising and we better somehow be able to see the finals.  I was telling a friend and fellow Demonstrator Kelly, that I will be the one carrying on a TV with a longggg cable cord so I don't miss it.  MAMMa said she would tape it for me though.

So James started out the show and was amazing as usual.  He started last week off too, not sure what that means other then he is the best.

Haley sang next and I did not like it at all, this is too late in the competition to be doing that kind of song, I know they were to sing songs that mean stuff to them, but I think there could have been another one.  Another song that we are like what the heck kinda artist is she going to be, all the others know what style they want to be, not Haley. I agree with the judges, they did not like it at all, and were very harsh with her, but I really think she did not come on the show to be an American Idol, I just think she wanted to get to Hollywood, I see her as an actress, not a singer. I hope she goes home.

Scotty sang a beautiful song that had me in tears and I loved how he changed up the melody a bit.

Lauren was beautiful and I loved the dress, and I think James might have stepped on it at the beginning when they all came on stage. She sang top notch.

So this week they had Lady Gaga as the one giving them tips, and this just floors me cause she is so wild.  I mean she does have a few songs with some catchy tunes, that once you hear them you keep them going in your head…like one is now…ra-na-na-na  or something…anyway, she had her hair like a skunk and these pointy things in her cheeks and makeup like a football player.

She gave them all great tips though, and I loved her comment that when she was 16 she was such a freak that American Idol would not have had her on there…or something like that.

Haley sang and she did much better on her second song, I guess you really need to tick her off to make her do her best, cause boy if looks could kill she was giving some evil eyes to the judges.  So I think all their saying she was bad is either gonna hurt or make people vote for her more.  I still say I hope she goes home.

Scotty sang an odd song for his second song, and you could tell he had a great time, but it just seems almost like he figures he is safe so I don't think this was a great song to do. I don't know that's just me. He did kiss his cross though after meeting Lady Gaga. I think she scared him. I have said that Scotty reminds me of Howdee Doodee, President Bush, and the Mad Magazine Alfred E Neuman if they all had a kid that is what he would look like, so I said that again to Jeff and he said, "well gee hun, you just described things American"

Lauren sang an Elvis song with evil in the lyrics and she was worried about saying that cause she is not evil, so then Lady Gaga told her basically to get in the role and just act the part, and she did a great job, and totally seemed more then her age when she sang it.

James closed out the show…hmmmm….he opened and closed….hmmm….what does that mean?  I say he is the winner, and he is amazing and the song was so good and it was Love Potion #9 and he made it cool. I love at the end how he went silent and then looked around and we were almost like begging him to finish and then he did…what a star!

So I voted for James, of course (a couple times) and I also voted once for Lauren and once for Scotty, cause I really want them to stay.  I think the bottom two are going to be Scotty and James though. If only I had a crystal ball…

Well that is it for me tonight, I am hitting the hay!