OMG! today I had to take a motion pill, I swear I was getting sea sick working on the computer.  Blech! Jeff just laughed at me.

I am hoping that Kim sends me some people pictures as I was a dork and didn't carry around my little point and shoot so didn't take tons of pictures.

So today I am going to show you food…ha!

This was in Juneau at the Salmon Bake, if I told you that we have been waiting to go back to this place for 7 years I would not be lying. I think I told you how we did this excursion before but it was part of a Whale Watching, Mendinhall Glacier thing so by the time we got to the Salmon Bake we had 15 minutes to eat, so this time we were determined we would have lots of time to eat so we did it all by itself, I'll show you tomorrow our fun table and bus mates.

Look how funny this is…see any different? 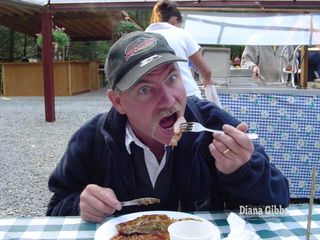 …this is Jeff in 2011…not much change eh? He's still a lefty, he still wears Mossy Oak hats, heck he has the same danged coat on. He does wear glasses now though. 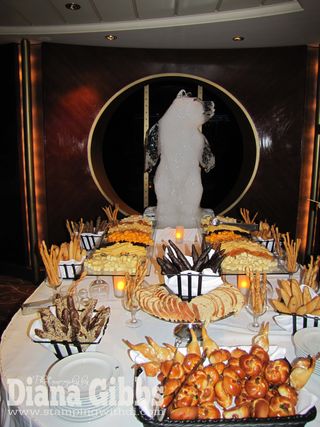 This is just some of the food that was served at the Share Night that Stampin' Up! had for us, Demonstrators could bring stuff to set out and share, stamping stuff, not food..ha!  I saw some cute things and I will show you another time. 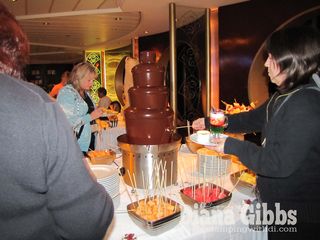 Chocolate anyone?  OMG! I should have taken a picture of the big spread of food they had out the next day.  I was just so bad this year, usually I take pictures of every meal.

This was my 1 lb of crab legs at the Skagway Fish Co, and Jeff got a plate too and we shared fries, half way through I was like "lets order another bunch of legs", Jeff said no, and thank goodness we didn't by the time I was done I was full, but it was so darned good. 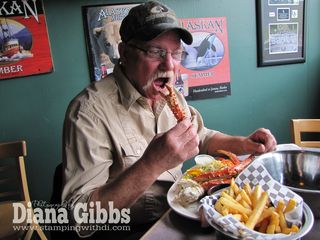 Poutine!!!  I was so happy that the pub we stopped in served one of my favorite fast foods.  Growing up in Canada I always ate fries with brown gravy (they served it in the cafeteria in High School), about 10 years ago (I am guessing) I went home on a trip and at the McDonalds when I asked for fries, they asked if I wanted poutine, then my friend Amir had to explain what it was, it is fries with brown gravy and cheese curds in it.  OMG! It was love at first taste.  My BFF Tracy says I am a picky eater, but I think really I am just a "plain eater" I just love basic things, in fact half the time on the cruise this year I had a hard time deciding what to get on the dinner menu, lots of fancy stuff, and this was a different cruise line then we went on before, and well I hate to say it but the food was not as good as we have had in the past, I was wishing that my home town Deli cooks were in the kitchen, I missed their amazing soups. 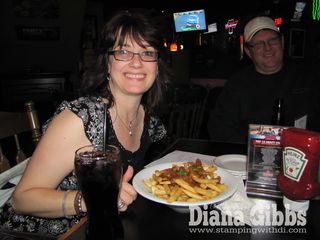 So even though this poutine was not made like I have had it, they used turkey gravy instead, it was close enough. You can see Deke in the background, my sweet friend Susie Wood's hubby, we were table mates and we are also Robin Merimann's GoDiva sisters.

That is all the food I took, if Kim sends me food pics I will share some more.

Well this old chick is off to bed.

I hope you had a great long weekend.  I know Jeff is headed back to work tomorrow, ready or not.