…today I had my Stamp club day and I had wanted to make Engagement Chicken, I think I talked about it last week, so anyway, I got it ready so that it would be cooking while the club girls were here.

I was not thinking very good on the time as it was getting close to being done and the girls were still here, I kept running in to check the temperature.  Somehow I was thinking it would take longer.  I didn't have the right kind of roasting pan as it said something about a rack and I didn't have a rack so it just sat on the bottom of the stone.

So anyway as the girls were stamping you could smell it cooking and I said I was making Engagement Chicken, I had heard about it on TV, apparently when the girl is dating, if she makes this chicken for her boyfriend in a months time he will propose to her, I got the recipe from Glamour magazine.

Now I told the girls that I was already married so I didn't need to get engaged, but instead I wanted to make the chicken for Jeff so he would remember how lucky he was, I also wanted to make sure they understood that it did not mean he was going to "get lucky" I just wanted him to remember he "was lucky".

So I called Jeff in and told him the chicken was ready, and he was to go ahead and eat.  The girls were just finishing up.

After they all left, I thought maybe I would find him in the kitchen, maybe all passed out from ecstasy from the taste or maybe on his hands and knees telling me how much he loves me and would marry me all over again.

Instead the kitchen was empty the chicken was half gone and I found this: 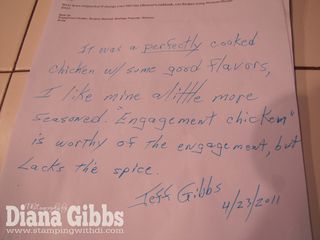 In case you can't read it, it says: "It was a perfectly cooked chicken w/some good flavors, I like mine a little more seasoned.  "Engagement chicken" is worthy of the engagement, but lacks the spice." Then he signed it Jeff Gibbs 4/23/2011

Now isn't that funnier then all get out? Who's husband does that? Mine! He's all mine!!! He's like my very own Chef Ramsey without the swear words.

I laughed so much I almost fell running to get the camera to take a picture of the letter.

I tried it and I thought it was pretty danged good, heck I'd marry me.

This is it out of the oven and I'll admit it does not look that appetizing, heck one of the lemons escaped from the butt and was laying in the dish.  I didn't have time to present it on a plate or anything, cause that would have made the presentation much classier.

Here is the recipe if you are interested.  Let me know how the marriage goes…

1 whole chicken (approx. 4 pounds) – personally I would want to do a bigger one

1/2 cup fresh lemon juice, plus 3 whole lemons – including 1 sliced for garnish (not super big ones or they fall out)

Position an oven rack in the upper third of the oven and preheat the oven to 400 degrees. Remove the giblets from the chicken, wash the chicken inside and out with cold water and let the chicken drain in a colander for 2 minutes.

Prick 2 whole lemons three times in three different places with a fork and place them deep inside the cavity. Chicken cavity size may vary, so if one lemon is partly sticking out that's fine. (Tip: If the lemons are stiff, roll them on the countertop with your palm before pricking them to get the juices flowing)

Put the chicken in the oven, lower the temperature to 350 degrees and roast, uncovered for 15 minutes.

Remove the roasting pan from the oven and carefully turn the chicken breast side up (I used a couple forks to turn it). Insert a meat thermometer in the thigh and return the chicken to the oven and roast for 1 hour to 1 hour and 15 minutes or until the meat thermometer reads 180 degrees and the juices run clear when the thigh is pricked with a fork.  Continue roasting if necessary.  Every oven is different but generally roasting a chicken at 350 degrees takes approximately 18-20 minutes per pound, plus an additional 15 minutes.

Let the chicken rest for 10 minutes before carving.  Here is the secret: Pour the juices from the roasting pan on top of the sliced chicken, that is the "marry me juice". Garnish with the sprigs of herbs and lemon slices.

Let me know what you think…here comes the bride!

Well with all this excitement, I'm gonna call it a night.

Have a Happy Easter and thanks for stopping in!