So I taped a quick tutorial on using the Petal Card Punch, I was using it wrong and maybe you are too. I used a program on my laptop that allows me to add like a title and captioning and an ending, very cool. I feel so Steven Spielberg-ish.  I still need to learn more to make it fancier, but hey it's better then nothing.

Jeff was pulling weeds and stuff today and found this plant underneath the pine tree so he moved it under another tree.  He says it is probably a weed, but it looks too pretty to be a weed. Do you know what it is? 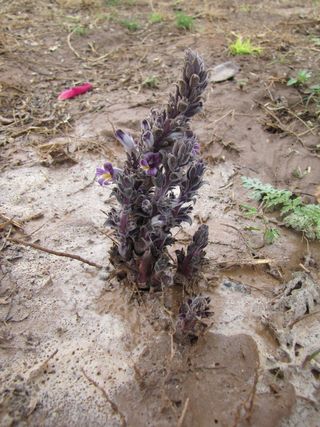 I hope it's not some dangerous contagious plant. It just looks like it will be pretty when it is all in bloom. Anyway if you know, let me know…thanks!

So those of you that have not watched American Idol yet…STOP READING NOW!!

Tonight was Rock n Roll, and it was fun how Steven Tyler introduced Rock & Roll and different stars and stuff.

Jacob: Micheal Jackson song. I liked that he changed the song they wanted him to sing and he went with his heart, and sang what he wanted.  He looked cute all dressed in white. He controlled his voice and didn't get all screamy.

Haley: She finally got to sing a Janis Joplin song as the judges keep comparing her. It was not bad and at least she moved around the stage. She didn't time her arm throw right when the song ended, she was early and the music was still going. I say bottom three.

Casey: He got out his bass and did an awesome job on the song from Creedance Clearwater Revival. He was accompanied by a mandolin and I get the shivers when I hear one, that is one of my favorite instruments. Loved his performance.

Lauren: Aretha Franklin, she was amazing and she sounded beautiful, and although the hairdo and the checkered shorts were not the best look I love her talent.

James – he was up next and while the commercial was on Jeff and I were trying to figure out who he was gonna sing, they said he was gonna make it soft, and I thought maybe Kiss' Beth song…I love that one, and Jeff guessed Foreigner (he has a thing for Foreigners – I mean he married one didn't he?) So anyway he sang George Harrison's While My Guitar Gently Weeps, and the singer helper guys at the beginning, I think they were almost wanting him to change his mind, but he stuck to his guns, he wanted to sing a song for his family. So the rocker came out and sang the most hauntingly beautiful song, and I cried as he sang, I love this guy.

Scotty – well I do believe that Elvis has entered the building, he did a great job and was still that quirky Scotty, holding the microphone all crooked like he's playing the flute or something, and I don't know if he was doing Elvis in Vegas cause a lot of his hand gestures looked like he was shaking dice. At the end these girls came up on stage and were mobbing him. That was odd.

Pia – before she came on Jeff said "write this down for your blog – she is going to rock the house" and I just rolled my eyes, so we all know she can sing, and she can, and I hope you are sitting down when you are reading this she actually moved. She walked around the judges and back on the stage and I think she did some squats and maybe side to side motions and that was it.  I say wear some sensible dang shoes and maybe she won't be afraid she's gonna fall and break her neck.  I say maybe bottom 3.

Stefano: It was a lot of screaming, I didn't like it.  I say bottom three.

Paul: OMG he sang a Johnny Cash song and you know how much I love my man in black. I don't know what I thought about it, it was not bad and it had me shaking my head and tapping my toe.  I think I much more prefer Adam Lamberts Ring of Fire over this. He jitterbugged all over, and a few times he was getting so close to that one other guy playing the guitar, its a wonder he didn't scream "get out of my space man!"

Jeff said his bottom three were Jacob, Haley, Stefano and Paul – "I said that is four" and he said "yes, those are my bottom three" and he gave me that wicked grin he does. The brat.

So I voted for: James, Casey & Lauren, those are my top three.

So who loves the Yaya commercials? They need to come up with more, I have only seen two of them. Too funny.

I also think I want to go see the movie Arthur.

Well I am going to try to get to bed before 1am tonight, the last two nights was so late, and I gotta get up early tomorrow to get our hotel reserved for convention.  I'm rooming with MAMMa since my BFF Tracy is staying home this year. It's gonna be weird without her but she is going to come to AZ this fall instead, and I like that better…so does Jeff.