As soon as I saw the new Summer Mini catalog and saw this set, I was like "yes, there's my next Learning how to Watercolor Class".  I have been doing one a quarter I guess now, this one will be the third class, each time the class is a different stamp set, but the techniques are the same. Learning how to watercolor with the ink pads/refills, the watercolor pencils and the watercolor wonder crayons.

As a Demonstrator I am able to order from the mini catalogs a month in advance to be able to play with stuff so I can teach how to use it when it is current for my customers.  If you are interested in becoming a Demonstrator, ask me how you can pick a free stamp set at any price for joining my team before April 25. This is an incentive from me only and not Stampin' Up!

My set came the other day, and even before it did I knew I wanted to use this set in my 10/10/20 Birthday class, and what I love about the SU! catalog is that the stamps are shown in actual size, so I was able to design the card before the set came cause I knew the sizes of the paper. Cool eh? 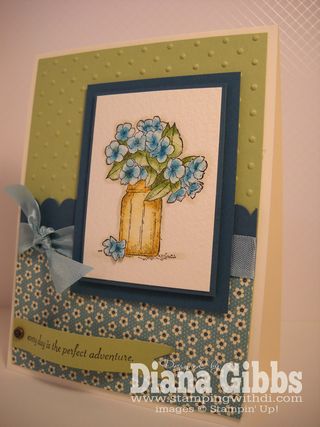 Stamp Set: On the Grow

If you are interested in coming to classes in my studio make sure to sign up for my newsletters (its off to the left hand side of my blog).  If you don't live in Arizona, I do have a 7 page PDF on learning how to watercolor using the ink refills.

Ok, look away if you have not watched American Idol cause here I go….

So my BFF Tracy who sees the show 3 hours before me texts me and she tells me to make sure I am wearing my Poise pad for the show, later I would be wishing I wore a barf bag instead, but lets not rush ahead and spoil things shall we?

Russel Brand (who ironically yesterday I said I wanted to see Arthur and he is the star of the new movie). He was on it and giving the Idols tips on being sexy and performing and stuff, he was hilarious. When he was talking to James it was funny, and my gosh he makes Paul look fat, but I love that accent and his overall innocent like goofiness.

You will remember that I guessed Pia, Stefano and Haley would be the bottom three last night.

Lauren, Casey & Stefano.  I loved the chatter about Kelly Clarkson twittering Casey and he was not saying what he would twitter her back, it was cute.  Lauren looked beautiful tonight, she seems to be growing up before our eyes.  Randy looks like he is wearing a pair of 3-D glasses you get at the theater, but there I have strayed from Stefano…no matter, he was bottom 3.

Then Constantine Marshmallow or something like that from a few seasons ago sang, and I might not have recognized him, his hair is quite a bit longer, and he does look older. Must be all that touring. I didn't care for the song choice, I guess I was hoping for something more rock-ish.

Then it was the next three:

Now Jeff and his friend from work had a Bic Mac lunch bet going and Lee said Stefano would go and Jeff said that Paul would go, so when Stefano got bottom three the first round, Lee texted Jeff and said Big Mac combo or something like that, and Jeff laughed.  So this was Jeff's chance of at least getting a free lunch. I said "its' gonna be Pia" and he was like "no way" So of course Scotty was safe first, then drum roll please. Paul was safe too. Pia sat down with Stefano, and the audience was like hmmm??? even the judges were making faces.

Then we had Haley, Jacob & James:

My James was safe..well duh of course he is…So if Haley was bottom three I would have guessed them all right. But surprise, Jacob was bottom three, again the audience was like what??? Again the judges faces fell. Jeff said "well look at his sweater".

Then we had to be entertained again.  Ryan had said Iggy Pop and really I was like maybe I had heard of him but would not know what he looked like at all.  Then this old tanned leather skinned, droopy boobs man came on stage, how did I know he had droopy man boobies? Did he have like a vest on and one fell out, or like a fish net shirt? NO!!!! He had no danged shirt on at all. This is where I really wish I had of maybe wrapped the poise pad around my mouth instead of where it is intended.  I think this guy needs to change his name. Prince did it. Hasn't P. Diddy, been like 5 names now?  I say his new name is (here he bows in front of me and I take the sword and tap on each shoulder) "I hereby name you Icky Grandpop, now go put on a shirt".

Is this the only rock legend that they could find to perform on the show? Half way through his running around, and some weird old dancing (now I see where Paul gets his moves), he sat at the side of the stage and I thought he might be having a stroke but then his "medicine" (I think he has glacoma) kicked in and off he was again skipping and singing all over the stage.  The song he sang, I think was "I'm a Wild One", I say think because he only said those lyrics 100 TIMES!!, how about I'm an Old One.

I need to Youtube and see what he was like in his earlier years, but maybe they didn't have videos then. I say to the American Idol people that find the entertainment maybe listen to these people before you have them on, and at least make sure they wear a danged shirt or at least a bra already.

Then there was a commercial maybe, by this time I was blind a little bit and had to get a drink of water and be hydrated.

Then we knew who was going home, and it had to happen sooner or later. It was Pia. So long, beautiful. And the audience booed and the judges jawed hung to the floor, and I am like well gee isn't it three strikes your out in baseball? How many dang times did she have to be told to take over the stage, move around and not just sing? And every week, she would say next week I'll do it, and again this week she said next week, well sorry next week aint gonna happen.

Now don't get all mad at me Pia lovers, cause I have never said she could not sing, she has a beautiful voice, and is gorgeous, but she was not an entertainer or a performer and you need to be.  I am sure someone will snatch her up and she will make an album, I also see her as the next Cover Girl or Maybeline, or whatever make up girl, cause man if using a certain kind of make up makes you look like her, I'd buy it.

So there you have it, all wrapped up with a pretty little Baja Breeze Seam Binding Ribbon on top!