We finally told Eric that we are going to take him on the Stampin' Up! incentive trip next year to Disneyworld.  Jeff actually told him before I did, so when I said something Eric already knew, he said "yeah Dad told me, I have to get a tie". Seems Jeff has explained to Eric that he will have to work on his table manners for the year leading up to the trip and other stuff and one of the things is that he will want to wear a tie to dinner.  Eric is such a handsome young man he will look stunning…do guys look stunning?  In Arizona, there is not much use for ties…well at least in Jeff and Eric's line of work.

Eric kept saying he had been there before and we were trying to explain that he went to the one in California, but not the one in Orlando, we kept trying to explain it, but he was pretty sure he had been there, I even said "did you fly on a plane for 3 hours?" but he was still positive, "yes he went with Sean", so we dropped it. It is not worth fighting over.  It will be fun to take a family vacation, it has been a few years since we did that.

So tomorrow is my last round of 10/10/20 Birthday card classes.  I love these cards, but this will be the 5th round of them, and I am ready to put a check mark beside this class as "done". Now to work on my Artist Tray Class and my Watercolor Class.

So today's card for Mimeograph Monday is using the cute set The Nicest Things.  I love this set because the images are a great size, not too big and not too small. I did not have the greeting set used in the catalog so I used a different one.

I copied the card on page 71 of the catalog. While I was doing it I was watching Brothers & Sisters, those of you that watched it, did you not totally see that ending coming as soon as Scotty ran into Michelle? Sometimes I wish I could write a sitcom. 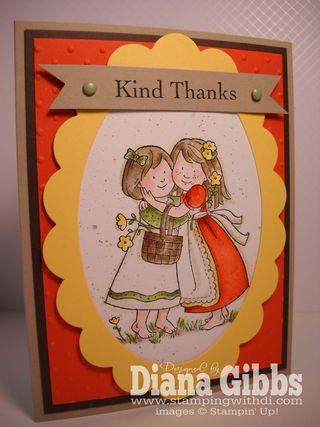 I have Two & a Half Men on, and it is so funny Martin Sheen is on and plays Rose's Dad, and I can't get over how much Charlie Sheen looks more and more like his Dad, but odd they have him play someone elses Dad and not the boy's father.

Well I am gonna head to bed, have an awesome Monday and thanks for stopping in.