…not a photographer or flower arranger.

My hubby has the most beautiful rose bushes, he is so proud of them and everyone comments about them when they come for class, especially now when they are blooming and smelling so nice.

At class Connie said she could not believe I didn't have roses cut in vases all over the house, and I said I was waiting for Jeff to cut me some. So this morning I thought to heck with it, I ain't waiting, so I took out my scissors and got me some. After quite a few pricks and pokes I filled up a little vase thingie with holes in it so the flowers sit up. 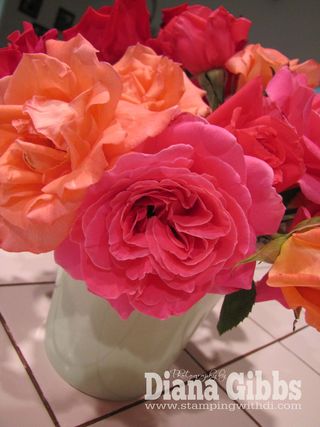 Pretty eh?  I also think that thing I bought at Tracy's last year might be one of these too, so tomorrow I am going out to cut more and do another vase.

I took some pictures outside, and they turned out not too bad, I still leave my big girl camera on auto cause I am still not too sure of all the bells and whistles on it. 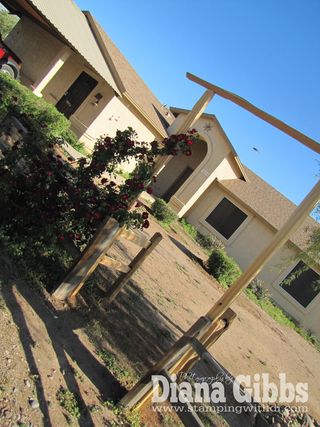 Jeff and Eric built this arbor thing for his climbing rose a couple weekends ago. Not sure what is in the sky, I think it might be a UFO. ET phone home! 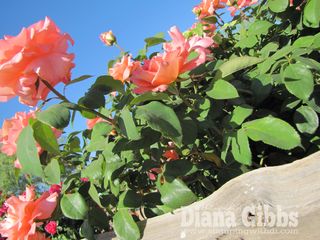 I like this one cause I leaned down and got the wood fence, plus the sky, look how blue it is. 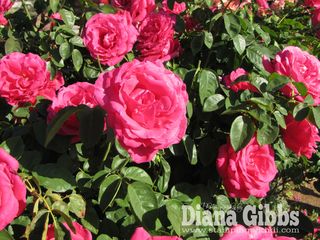 Lots of pink roses, I sure wish there was scratch and sniff for the computer, the smell is amazing. 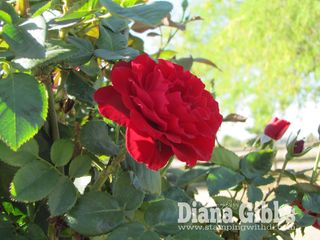 Jeff also has these other type of roses on the other side of the yard and they are smaller and almost like mums.

So today was fun, I met Melissa (my enabler – I told her I would put that over in my "Di"ctionary so people knew who I meant.) We were telling the Barnes and Noble sales girl, and she was adorable and so helpful and so funny.

I was looking for winter boots for Alaska, cause living in Arizona, I don't have any, I thought maybe I would get a great deal on a pair, and there were none (that I liked) to be found, so I think fate is saying, cowboy boots will be plenty.

Then we went to Liberty Market for lunch, OMG! delicious, and I ate too much! Then we headed over to Barnes and Noble so I could go Nook shopping. Mel has one so she gave me great advice. 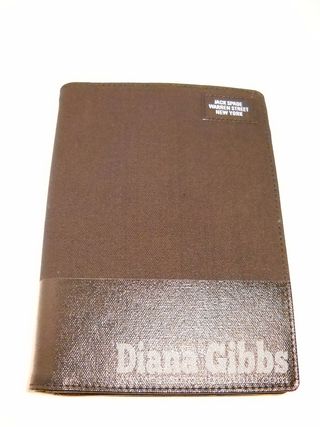 A cute jacket for my new toy, the Jack Spade stuff was 75% off so this was a great deal.  We were not sure who Jack Spade is, but I think he is the character that Johnny Depp played on Pirates of the Carribean, that's my story and I'm sticking to it. Yo-ho-ho Matey! Walk the plank and shiver me timbers!

Here's my girl (I'm trying to think of a good name for her? Any suggestions?) She's all loaded with a few books. Yes, the Twilight Saga series…of course. I need to read up on the instructions as I am not sure how to do all the features. Oh and I tried playing Sudoko, what is easier then easy? Cause I was not having any luck. I hate math stuff, it makes me want to cry, my brain doesn't work well with numbers.

Well I better get crackin'! I didn't get much done today work wise, it was so nice, I needed a break. I told myself I need to have one day a week that is a me day, so today was it. Is that bad? Huh honey? Since Jeff reads my blog in the morning…ha!

Have an awesome Wednesday and thanks so much for stopping in!