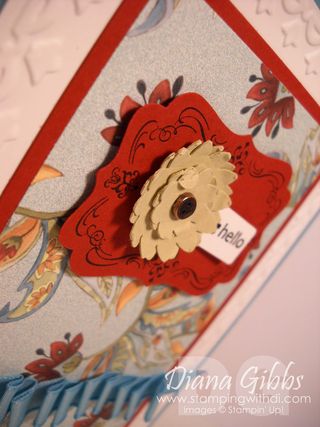 I'll be quick tonight as I have been working on class stuff all day.

I wanted to show you the last card (I think I showed all the other ones) from my 10/10/20 Birthday card class, it uses the Paisly Prints DSP & Four Frames set. You have only a few more days to get it. I know I keep saying that but just in case you are new to my blog now you know too.

In the morning when I walk on the treadmill (which I need to do every day) I have been watching the Game Show Network and I watched a show called Lingo…took me a while to get what the heck was going on,  there was an episode where it was a dad and a son against a mum and a daughter (the teams were no relation to each other), and I swear the daughter did not want to be there, she was so grumpy and looked bored and one time the mum told her the word to spell ( I still don't understand why they don't just spell it instead of the other person) and I think it was CROWD, but the girl spelled it CROUD, you should have seen the look the mum gave her, well of course that was not right so the guys got the points, and then the MC made a funny remark like they really messed up, and he might not have should of said that and I wonder if that is why they are saying the new MC is going to be Here's Your Sign Bill Engvall. Can you imagine him, he's liable to just go over to the person and slap them with a flyswatter.

OMG! This commercial makes me smile all the time, I love the look of the lady that quickly covers the cake…the whole germafobe in me totally understands. Same with those fruit bouquets!! How safe can those be? How can you remove your piece of fruit without touching someone elses? My friend Carol even said "what if someone sneezes?" I almost passed out when she said that just thinking about it. I still wake up at night sometimes screaming "Move the Fruit Bouquet,  Billy's gonna Sneeze!" Just kidding of course.  I want my hubby to read the word sneeze and know that I am secretly sending him a message.

So American Idol, what a night eh? If you have not seen it, don't read anymore.

Oh and those of you that are east coasters don't email me (or I just won't read my email before or during the show) about Idol…at least result stuff.  Rhonda emailed me about the dog on the couch and that was cool cause I totally saw that his head was in different positions but you never actually saw him moving so it did make it seem like it was taped and edited. I might not have noticed that if she had not have said anything, so thanks Rhonda.

I think tonight the sound was off in the beginning where the Idols open up the show, cause it seemed too low. What was up with Steven's hat? Oh and the Rolling Stone cover, not a good picture, but the other one where it showed him inside the magazine.  Way nice!!! He makes old "cool".

It was nice seeing Crystal Bowersox, and her familiar glass mike stand.  She looks thinner and I noticed that she had her teeth straightened, she still looks like herself though, not like when Cher had her teeth fixed. I personally loved Cher's old teeth, with the fangs.

Then Ryan started the results stuff and brought out Haley, and for the love of Pete she was saved and he told her right away.

Then he did Scotty, and told him he had to wait go sit down, then Lauren, same thing, he did it with everyone till James, and he told James he was safe. YEAH! BABY!!  So this was weird to me, then he brought all them up that he told to sit down and wait, then he told Lauren she was safe, so then the bottom three were Casey, Scotty & Jacob, and then he said Jacob was safe, so then I figured Casey would go home and yep he did. Casey really sang a nice send off, kissing girls in the crowd, kissing Steven & J-Lo, and then not sure who the guy and girl were in the audience before he went on stage that he mugged with, then I thought he was gonna make out with Haley at the end when he came up on stage, but he didn't.

I was not upset like I was when he was kicked off the first time and the judges saved him cause he was so much better than all the other people that have gone home before him, but I think that he might have stayed longer then Jacob and certainly Haley.  So next week Jacob & Haley one of them will go, I am predicting.  I wonder what they will sing? I thought they used to tell us at the end of the show what they would sing the next week?  They have not done Judges pick yet right?

Ok, well this post that was gonna be quick was a little long, sorry about that.

Did you get up to watch the Royal wedding? I remember doing that for Princess Di and Prince Charles and her long train on her dress. I think I had to go to school that day, it was a few years ago,  I remember getting up for Diana's funeral too, such a sad day. I don't think I will be getting up, I mean as I type this it would only be like 4 hours away or something, I'll just watch replays and stuff I am sure they will be showing lots tomorrow. Let's hope they live a long and happy life with each other.

Have an awesome Friday, and thanks for stopping in!