I wanted to show you another card from my 10/10/20 class, I think I only have them coloring one card, cause there is a lot to do in just a few hours, so I have to keep them simple and pretty. 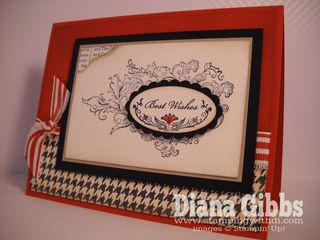 Have you seen the new show "Breaking In"? It kind of reminds me of a cross between Leverage and The Office. What do you think? I love me some Christian Slater.

OK American Idol folks here comes my opinion, soooo as I warn you every week, if you have not seen it and don't want me to spoil anything, stop reading now.

Tonight was the Top 8 and they were singing songs from movies.

Steven Tyler makes me laugh with his flamboyant way of dressing, his frilly shirt had like a scarf or something, and every week he wears that necklace with the teeth on it.  Love him!

Paul – I see he has pants to match that jacket.  He may dress like Porter Waggoner, but he sure don't sing or act like him.  Someone needs to tell Paul that you don't clap the mike, you could here him banging it as he clapped.  If I was at a bar or something and he was up on stage signing and dancing around I would wonder if he was being serious or joking around, he makes me tired watching him. I say bottom three.

Lauren: She looked amazing and sounded amazing. She sang a Miley Cyrus song. Miley who? I loved her high parts and I totally loved the ending where she warbled her voice…is that a word warble?

I am really liking Will I Am as a mentor.

Stefano: Boy he sang his heart out tonight, since he has twice almost been voted off. Once with Casey and last week with Pia (who Jeff says he heard is already cutting a record). I did not know the song that he sang. J-Lo can't even sit still when he sings, she bounces around in her seat like a teenager.

Scotty: Sounded pretty good, I love the George Strait song that he sang, I think the back up singers were too loud, there were times you could not even hear Scotty.  He changed the song a bit from the original, this was not his best performance.

Casey: I love that he stuck to his guns and sang what he felt he wanted to sing and he nailed it.  I loved the little riffs he did in the song, and I love when he slaps that bass. After he came off stage and was talking to the camera, he looked horrible like he could puke.

Haley: She just rubs me the wrong way. Maybe if I didn't have to look at her she would be ok to listen to…maybe.  The song she picked was not good out of all the choices she could have made.  I think if she spent more time picking better songs, and less times picking out her clothes and shortening the skirts it would be better. – I say bottom three

Jacob: I love the song he sang, but not the way he sang it.  Have you seen the movie Rocky Horror Picture Show? Well Jacob reminds me of the way that Tim Curry sang on the show, very broadway, musical like and I don't think that is American Idol-ish.  I think he might be in the bottom three.

James: I loved it, and I love that he knows who he is and wants to be and does not settle or do something he does not believe in, and he rocked the house down and ended the show with a bang and it needed it, cause it was kind of a boring show.

I voted for James, Lauren & Casey

Well this old gal is headed to bed!