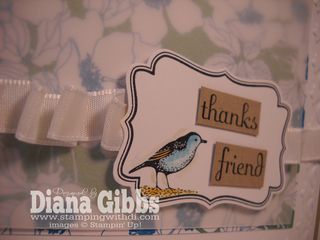 Last night I broke My Precious' cover, I have to take the back cover off in order to put it on the clock thingie, and snap! the front cover broke, so today I ran over to the Verizon store to get a new one, and was told by the not so pleasant worker "oh you have the original Droid we don't sell covers for those, you'll have to check Amazon, your phone is obsolete" then she walked away to wait on someone else.  I was like well gee I still pay my bill every month I think I should be treated a little better. I think they should have to keep some basic covers for phones that they have sold, I don't mean phones like 5 or more years old but heck the Droid is not that old.  So anyway, I did go online to Amazon and I ordered a new cover, I won't be going into the store anytime soon. Maybe I'm being over sensitive, maybe Aunt Flo is coming to visit soon.

I made up a few cards with the same layout I used the other day, but this time I used some of the new Beyond the Garden DSP. 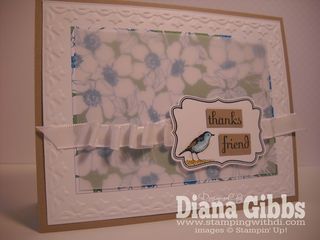 Stamp Set: Fabulous Phrases, Four Frames – you only have a few more days to get this set

The DSP was a little bold so I took a piece of cardstock vellum and I cut it a little bit smaller and I mounted it over top the DSP and that softened it up.

What do you think?  I was about ready to scream cause my phone would not focus on it. Maybe it was the vellum? I finally got it to work.

So the other day Jeff and I were talking about the Alaska cruise coming up and then we got figuring out the dates of American Idol and now I'm freaking a little bit, cause I am thinking we will be on the cruise the final night of American Idol and I don't know it there will be local stations?  I need to find out, we'll be in Victoria maybe we can find a pub somewhere. Can you just imagine? Me not seeing my James Durbin win?

So American Idol, if you have not watched it, stop reading ok?

Tonight it was the Top 6 and the Idols were singing Carole King.

I must not know many of her songs cause I didn't recognize too many of them.

Jacob sang first and a song I did not know.  I am not sure who dressed him but his tie was all crooked and his colors were very bright.  I did not care for the song, but it is always hard when I don't know a song. He sure had a lot of fun singing it though.  I think he will be in the bottom three.

Lauren was next, and she looked beautiful and she sang great, and even had fun with a young guy in the audience, she comes out of her shell more each week.  I wish she had of picked a different song, and I can't believe they brought on Miley Cyrus when Lauren was practicing, but I guess if Lauren likes her that is good, but I don't know if Miley would be where she is without her famous Dad.

Scotty was up next, and I sure wish they had of just let him sing it the cowboy way cause I didn't particularily care for this arrangment.  I think that Glenn Campbell sang that song years ago, and he was country.

Then my boy James was up, and I swear he gets cuter every week.  He sang amazing as usual, he made me cry like always and I loved everything he did with this song. How he started it, how he changed it up to rock in the middle and how he ended it. I swear someone has got to tape the final Idol for me, we don't have a tape machine at our house. MAMMa? Will you? I know you will be watching it.

Then Lauren & Scotty did a duet, this was their third one and it was really really good as usual. I loved when they interviewed them and the question was "how do you complement each other?" and Lauren said he never complimented her, and it was too funny, cause then Scotty was like they didn't ask that or something like that…too cute.

Then Casey sang in his true wacky Casey fashion and I was on the Casey band wagon but I am slowly sliding off, I think he will be in the bottom three.

Steven Tyler had some little girl sitting on his lap for a bit, and it was so funny she was touching everything on the table.  Laverne from Laverne and Shirley was in the audience with the trademark round sunglasses. I also saw the Everybody Loves Raymond cop brother too.

Then (please get rid of her) Haley sang, and I did not know the song and I didn't like it. I see where she shortened her dress up as her hem was all crooked on the sides. I say bottom three.

Then they had Jacob and James as a duet and although I love James, this was not a good pairing. At one time the guys came down and pulled J-Lo and her chair out from behind the table and spun her around and she quickly plunged her hand down to keep her dress from showing off too much, we almost had a Sharon Stone "Basic Instinct" moment.

I voted for James, Lauren & Scotty, and I think they will be the top three at the end.

They keep showing this Victoria Secret commercial with the models with wings on and not much else and one of them looks like she is on a cruise ship, and Jeff is all excited hoping she'll be on ours. If he wants wings, I'll give him wings…ha!

They have also been showing lots of commercials for Pirates of the Carribean, and I think tomorrow I'm gonna wear my make up the pirate way.

This is what my make up looks like when I get up, so I guess I'll be half of the way there. Ha! I mean Arrr!!!