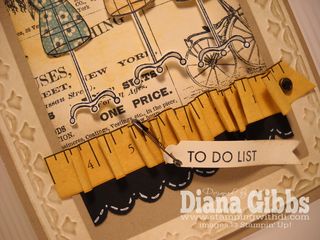 Where do I start? Seems like the to do list never fully gets done does it? Heck sometimes I'll even add stuff to my list that I finished at the end of the day to just check it off as done to make me feel better.

Today was a busy day, Toby had a grooming appointment so after I dropped him off I ran some errands as it makes no sense to run back home for half an hour and then just have to head back to the groomer again, so I picked up some stuff for my Open House on Saturday, I had to stop and gas, oh my gosh these prices are crazy! Why don't we use American oil instead of relying on other countries?  When I went back to get Mr. Toby I asked Susie if I could take their picture. 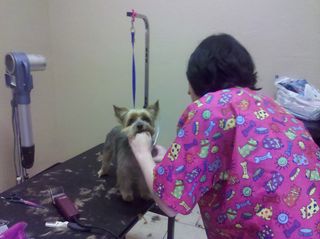 What a good boy eh? Too funny, Susie called me and asked how I wanted his face cut, cause his bangs were trimmed some, and I was like well ummm…I did that, I was trying to apply for a job and show off how great a groomer I would be…she just laughed.  Actually I had put a band in his hair to get it out of his eyes, and he had that rubbed off in no time, so I took a pair of scissors and snip…he could see again! He looks way better now, and struts around knowing he does too.

So this card was fun, I had the idea in my head but kept changing it and now I really like how it turned out. I originally only had one dress form but it got lost with the DSP in the background, so adding two more really made it better. What do you think?

I did some paper piecing again like I did last night, that is one thing that I forget how much fun it is and then I want to paper piece everything. See that "measuring tape ribbon" on the card?

Wanna know what it is?

Did you notice the longer jewelry tag punch shape that the TO DO LIST is stamped on? 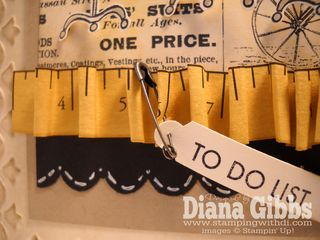 All I did was cut the strip of card stock small enough so I could fit it in the punch so just the end would get punched, and then I just punched the tip. Neat eh. I know I have shown that on here before with a different punch, I wonder if I could find it? If not I will show you another day, I am trying to get this posted and hit the hay. OK so I am still looking for the punch tip, but here is one for the getting the fish tail (but just use the square punch instead of the one I show cause this one is retired, but it is the same concept. Well poop, I can't find it so maybe I only thought I did it, I will show you tomorrow ok?

Here is the full card, and I'll brag and say I love the shabby vintage-y look of it. 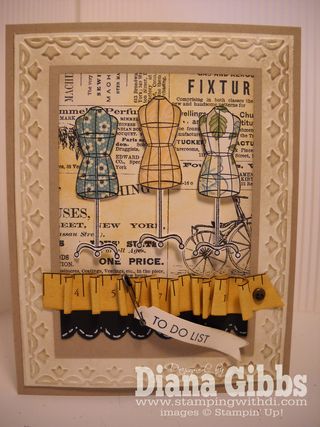 Stamp Set: Sew Suite, Eat Chocolate (this is where I got the TO DO LIST greeting)

OK you know what's coming right? Those of you that have not watched American Idol tonight, please don't read anymore.

So the 12 guys were up first, hey whatever happened to ladies first? Ha! Maybe they flipped a coin.

Clint: Ugh, I can't wait till he goes home, he sang not bad, but I don't like him.

Jovany: He looks like a younger Sylvester Stallone doesn't he? He is such a cutie with his chiseled face, and he sings pretty good too.

Jordan: Mr. I was not auditioning people they were coming to me for singing help…ok whatever dude. You keep saying it and eventually you will believe it.  I didn't know the song and that always makes me never sure if it is good or not, but I thought he was horrible.

Tim: I didn't know this song and it was so-so.

Brett: Mr. Hair. I thought Taylor Swift flung her hair all over when she sang, this guy was ridiculous! Plus he said he didn't realize he was doing it?  I can't believe the judges liked his performance.

So when they were talking about J-Lo's new video coming out it looked like Steven mouthed the words "Hi Liv" to the camera and that is his daughter so it made sense if that is what he did.

James: OK so now the show has really started.  I love this guy, he has so much talent and I want him to go all the way. He is so danged cool!

Robbie: He has a Seinfeld kinda look about him. I think he totally ruined a beautiful song and he should have sang it regular, and I can't believe that Steven & J-Lo liked it, and I was like Yo Dawg when Randy was like no way it was pitchy…yeah man, speak to me dawg!

Scotty: I love me some country & western and he did this song proud. The last word was kinda odd the way he sang it, but I hope he stays on for a while, I can't wait to see what he does when they do weirder music.

Stefano: He sounded pretty good, and he looks like he is 10.

Paul: His voice is so unique and distinctive, and the song he picked was perfect for him. His teeth are so white, and he is rail thin with toothpick legs, and he wore all black and it looks like he wears a size too small.

Jacob: He is such a character and he can sing anything.  It is almost like he is two people, there is the singer, with the flirtiness, and then when he gets talking he gets so excited he is jumping all over the place. He is fun, and I bet everyone loves him on the show.

Casey: I am so glad he got better, as they said he was sick. He sang so good and he reminds me a bit of Jason Segal in the Knocked Up movie, with a bit of Amish thrown in.  He is so talented.

I think they got quite a few talented guys this year, and I look forward to the season.

Who do you think was the best?  Who did you vote for?

The girls are up tomorrow night, I hope I can watch it, Mark is supposed to be here getting the rest of the stuff installed.