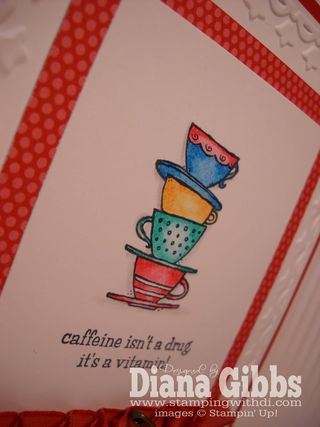 Thanks for the warning.

When I was driving to get my hair cut the other day, a gravel truck or maybe a cement truck, it had the extra wheels on the back and one of those shoot things hanging out. Anyway, on the top of the truck it had the words "Stone Slinger" like that was the truck's name, and I was like Whoa Nellie, don't get too close cause I don't want any stones slung in my direction. In fact I stayed way back from one of those trucks the other day. At the stop sign when I was behind him I could see all these rocks in the grooves of his tires, and I was just envisioning them flying out and hitting me. Not sure where the mudflaps were.

Voices, I have a voice that is not always great, when I get excited it gets higher and faster, just ask my BFF Tracy who on numerous occasions has told me to slowww down, she can't understand what I am saying. So anyway, she might cook great but I can not stand the sound of Rachael Ray's voice, nothing against the girl but I just can't, I turn the channel.  So I got an ad from where I buy my books and there is an audio book Rachael Ray reads Green Eggs and Ham…oh Lordy, don't think I'll be using my coupon on that one.

Well wasn't that some random nonsense to talk about? Ha!

What the heck did I ever do before puckering ribbon and hanging a tag on it with a vintage trinket? I guess I just tied ribbon on it plain. Ha! 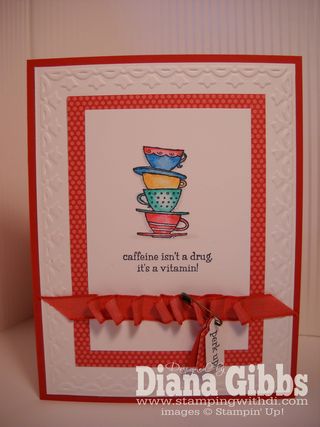 I love this Morning Cup set and these fun primary colors make it look "perk"y!

OK my faithful readers who love American Idol as much as me…don't read any further if you didn't see it, or you SLEPT THROUGH IT!!

Tonight was Motown, and with so many amazing songs to pick from I am not sure what half of them were thinking.

First off what was up with the green/blue eye shadow on J-Lo, maybe that is popular again cause believe me she would know more then me, but maybe some things should not come back.

I loved seeing Steven Tyler's daughter Liv in the audience, she has to be the most gorgeous girl.

Casey – Marvin Gaye – his hair was all slicked back and he looked so dapper.  What a great way to get the night going, and then it was up and down (mostly down) all night.

Thia – Martha and the Vandellas – I did not care for it and I think she was messing up the words I do know that reading her lips she was not completing the words if that makes any sense at all. I think she might be in the bottom 3

Jacob- James Jameson I think they said? – I am glad that he controlled his voice, and he looked so cute tonight. Ryan was so weird tonight and he started out by letting all these people come up and hug Jacob…ok whatever.

Lauren – Supremes – She looked beautiful with her long dress, but I was afraid she was going to trip on it as she sang and mingled with the crowd. She totally popped the song!

Stefano – Lionel Richie – So while the commercial was on Jeff guessed he was going to sing Hello and he did.  But I didn't like it, he sang it too high, and I don't care if Randy didn't use the word pitchy, I think this was.  J-Lo made some awesome critiques of Stefano, I don't think he'll go home, but he needs to feel the song more. Another weird Ryan moment he brought out left over food that Stefano's Mum cooked for the house and was eating it. Later he had the swearing Hell's Kitchen cook guy try it and he was not impressed, and I was like the poor Mum and then it showed her and I was like gee Ryan they praised her up before and then they made her feel bad…perhaps next year, they get a new host, it sure has worked this year with new judges, I love the feel of the show this year.

Haley – Smokey Robinson – this was bad, although the back up singers did good.  Who was the girl that was on a few years ago that wore the short shorts and the heels that is who Haley reminds me of, and that will only get you so far.  I say she might be in the bottom 3 again this week. It would not bother me if she went home.

Scotty (Howdy Doodee) – Stevie Wonder – He's like a suave jitter bug on stage, he has these jerky movements, and it makes me laugh. This was the first time we saw him out of his country western box, and he did a great job turning the song into a Scotty song.  My hubby Jeff wants this on the record, he says Scotty might just win the whole thing.

Pia – Stevie Wonder – she moved her hands a lot, and sang another ballad, and although she has an amazing voice and is beautiful, it was boring.

Paul – Smokey Robinson – He gave it the Paul spin that he does every time, and he played his guitar and we lucked out that he did not dance, just a few foot taps.

Naimi – Martha & the Vandellas – She sounded awesome and she picked the perfect song for her, but don't get mad, but I could have done without the dancing at the end.  I know that is mean, cause that is her heritage, but it just seemed kinda weird to have it there at the end.  I don't know that is just my opinion.  The song was great without it. I say she might be in the bottom 3 or Paul, I am not sure between those two. I don't think she should go home yet though.

James (my boy) – Stevie Wonder – he makes me cry every time. I love this guy he is so talented, and I want it on the record that he will win the whole thing.  So Jeff kinda forgot about James, and when he was coming on then he was like "oh I want to change my mind" and I said "no I already wrote down what you said for the record" I used pencil and could have erased it, but heck what is the fun in that?

So who did I vote for?  James, Casey & Lauren – Jeff says I can only vote for three, I asked Jeff if he wanted me to vote for "his" Scotty and Jeff said "I don't vote". Well Scotty aint gonna win then is he honey? Ha!

So it will be interesting to see who the entertainment will be tomorrow night, I hope it is not rapper stuff.

I am gonna call it a night. Oh and I do kinda like having my book on My Precious, cause it goes pretty much everywhere I go so I can read ANYTIME I want, in fact I sat out for about half an hour while the girls ran around tonight, and I know with a real book I would forget to take it and I know I would be that way with a Kindle or Nook but with the phone I always have it, but I guess for trips and stuff a real reader would be better, I wonder if they would sinc up with my phone to know where I was in the book? Like if I got a real Nook could I have the book on my phone and the e-reader too? Anyone? Bueller? Anyone?

Have an awesome Thursday and thanks so much for stopping in!