Jeff had a Doc appointment today so I went with him.  I have learned the older we get that I need to go with him.  He is such a "I'm fine and nothing can happen to me" kinda guy that he does not always answer truthfully, not bad stuff but plays some stuff off that might be serious.  So about three months ago he had a doc appointment, and a few of his tests were a little high, so the Doc wanted him to change his eating habits and stuff to see if they would get better, so when we went today, it was great to hear that yes, his results are better, so he needs to keep doing what he is doing. I wanna grow old with him so he better behave. I know he reads my blog so he is probably rolling his eyes.

We went out to eat on the way home, and while we were there Eric called and said "that man in here", and I was like "who?" and Jeff was like "it's probably Mark" and it was, I didn't expect him that early.  So Eric was like "can he come in?" Mark wanted to make sure it was ok, and I was like "sure". So we ate up and headed home, and guess what?  After a few hours…drum roll please, it is done, my room is done and I love it.  Jeff is going to add a couple shelves in the big shot cabinet tomorrow and then I will take pictures and put them on my blog tomorrow, so make sure to check back. Would it be bad if I did a video too? I don't want to be coming across like I am bragging, I just know that sometimes video is easier to see how things work.

This is another of the beautiful cards that my BFF Tracy sent me. Don't you love it? 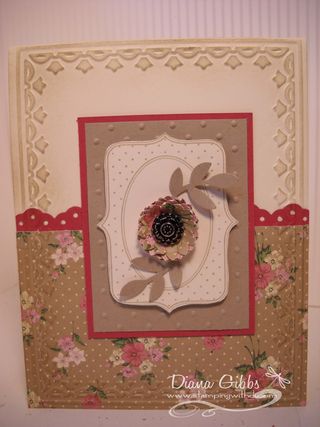 I have not used my Daisies #2 die in a while and this card reminded me how much I love it, so I need to get it out.

Here is a past tutorial showing you how easy it is to use.

While I was looking at old tutorials I found a couple more of my favorites.

So I did more working on taxes today, before we left for the Docs and then while Mark was finishing up, I still have tons to do.  Someone needs to ask me at every quarter of the year, "have you done your reports yet?" then maybe I will do them quarterly, seems so simple to say it eh? Maybe I should reward myself every quarter when I do it, so that will make me want to do it.

So if you have not watched American Idol please stop reading cause here I go with my two cents.

Let me say again how much I love adding Steven and Jennifer as judges, they are so nice, truthful and well normal, Paula was so freaky, I couldn't stand Tara, so they were smart to get these two. Randy now is in Simon's old seat and keeps it real Dawg!

The Idols got to sing a song from one of their idols and it was neat to see who they looked up to.

Lauren: she sang a Shania Twain (yeah one of my favorite Canadian singers) song and she did pretty good, it was not her best performance I think she played it safe and sang what she felt comfortable singing, and this was the first night right? She is stinking adorable.

Casey: he sang Joe Cocker and he did an amazing job! He is truly a force to be reckoned with.

Ashton: she sang a Diana Ross song that I had never heard before, this always makes me wonder "why?" I mean why sing a song from a popular singer that people don't know that much. She did ok I guess, and she sure did look like a beautiful Diva.

Paul: he sang Bryan Adams, ok again, what the heck another of my favorite Canadian singers and he sings a song I have never heard, and he hopped around the stage like Jiminy Cricket, half the time I thought he had to pee the way he bent over, and PLEASE PLEASE someone buy this man a bigger jacket!! I still love his unique voice and quirkiness, I just wish he had of sang a song I knew.

Pia: Holy Moly, she is amazingly beautiful and talented. She sang Celine Dion and she brought tears to my eyes.

James: my sweet boy, he sang Paul McArtney and he made my cry too cause he is so unbelievably talented and I can just imagine the hard life he has led. Having a child with a disability, I know how cruel kids can be and I am sure he has had his share of being picked on and teased and look at him now. He is so talented, freaking adorble to boot and I can't wait to get his CD.

Haley: she sang Leann Rimes and it was a little pitchy, I think she might be going home.

Jacob: he sang R Kelly, and he put his spin on the song, in fact in the middle of it he kinda warbled over and over like a car alarm, he sure has an amazing voice.  I bet the church roof flies off when he sings on Sunday.

Thia: she sang Michael Jackson, and I think she could have picked a better song to sing, and it was very boring I thought.  I would have rather she sang the song about the rat, I love that one.

Stefano:  he sang Stevie Wonder and well I don't know if I know the song or not cause they said he put his own spin on it. He sounded pretty good.

Karen: she sang a Selena song which was kinda cool since Jennifer Lopez played Selena in the movie. I did recognize the song and it was just so-so.  She might go home tonight.

Scotty: he sang Cindy Lauper…ha! just kidding, Jeff and I were trying to guess when the commercial came on who he would sing.  He sang Garth Brooks and he sounded awesome, he has a little bit of a bobble head movement when he sings, but those blue eyes melt all the young girls in the audience. I'm not sure how he will do when it is not a country song, remember he did not do well with remembering lyrics before.

Diami: she sang Rianna and she danced and sang, and well she danced too much and couldn't sing all her notes cause she ran out of breath, but she did amazing.  It was nice to see her in some funky clothes instead of all dressed up like she usually is, but I wish she had of had a shirt with sleeves. At the end she looked down and made a face so I don't know if anything was coming out of the shirt or not. The song is not the kind of music I listen to but she did a great job, and I would love to see her hair differently, she is so pretty.

So who did I vote for? James, Casey, Pia, Scotty and Lauren – Jeff was like only vote for one, but I didn't. Ha!

What did you think? Who do you like? Who did you vote for?

Well that is it for me, gotta get up early to get more tax stuff done, Ellie and I are headed over to IKEA too, I need to find something to put my glitter in, the gladware ain't cutting it. I also need to get some task lighting for under the cabinets.