I hope I can see to type, I just finished watching American Idol…I'll talk about it more later.

Today my niece Lauren came over and we went to lunch, we stopped off at the Pet store and I picked up a couple Easter toys for Toby and a couple containers of meal worms for the girls. Toby got one stuffie right away (the tail was chewed almost off in no time), and Lauren and I sat outside on lawn chairs while the girls ran around and I poured out the worms and Alice was a crazy chicken and tried to eat everybodys. In fact Clara would get one and Alice would run over and almost rip it out of her mouth. Crazy! I let them out later tonight and I don't know what was wrong with Gertie but she kept getting all up in Clara's face, like standing tall and making her neck all long and almost pecking at her, I told her I wouldn't have any of that. I'll have to google and see what that is about. They used to pick on her so maybe she is getting back.

OMG! and you should have seen Alice, I should have taped her, Lauren and I were laughing. Have you ever seen a chicken jump? It is so funny, she was jumping to get the leaves that are sprouting on the tree that overhangs the fence, that Jeff is going to trim so I stop catching my shirt on it..hint! hint!

I saw this adorable card by the talented Twila Mooneyham and I knew I wanted to do it for my FLICKs (First Level Incentive Card Kits) for February.  I tweaked it just a bit.  Thanks for the card idea Twila, you rock!! 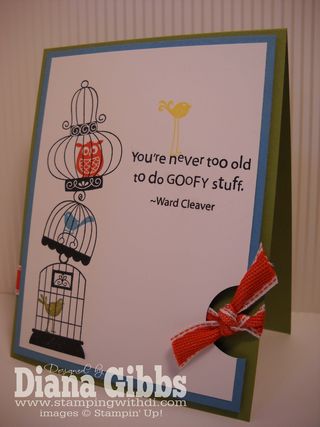 OK so speaking of American Idol, stop reading if you have NOT watched it.

It was a much more entertaining, and gut wrenching night then the night before.  To start off the Idols sang and then they opened up the doors and Stevie Wonder was wheeled out playing the piano and I thought Steven Tyler was gonna faint, I think he was as excited as everyone else was, then Stevie Wonder finished his song and started to talk to Steven Tyler and said something about it's what friends do, and they all started singing Happy Birthday to Steven Tyler, they had a cake and everything and Steven was totally shocked!

The first three on stage were Lauren, Pia & Scotty and they were all safe.  Tonight they were going to be figuring out the Top 10 that will travel around and do concerts.

I must say there was lots o'cleavage tonight. I'm just sayin', that's all.

Then Sugarland performed…Yay! Country!! Now I am so glad that Jennifer Nettles is a singer and not a clothes designer, cause she is a little bit color blind, and she was a little late for the green pants, St Patrick's day was last week, but at least she wore her Easter belt.

They showed some fun times at the house where they were wrestling as James loves wrestling.

Then they did my boy James, and Paul – Ryan said they were not safe, and I almost was sick, and then the door opens up and Hulk Hogan stands there and I thought James was gonna faint.  So Hulk tells them they are safe and then he pounds Ryan in the face and he falls into the crown, and then he rips off his shirt.  Unforunately now anytime I say "keep your shirt on" this vision will come to me and I will shiver just a little bit as it was indeed creepy.  Jeff said this is his signature move the whole shirt thing, but I am like maybe he should retire that. Who wants to see a 100 year old fake tanned shaved chest…not I, not I.

Then they did Stefano, Thia & Jacob. Jacob was safe and Thia and Stefano went to the bottom three chairs, so I was right with Thia, not with Stefano.

Then they did Casey, Haley & Naimi, and I was saying see ya Hayley, bye bye Haley, and OMG! Casey was in the bottom three. But then I said to Jeff maybe he is in the bottom three of the top three, do they really say the bottom three of the voting? Could they be playing sneaky just to make sure we vote every week and to keep up the suspense? So they then said they would send back one and I thought Casey and nope it was Naimi, so then we had to wait while Jennifer Hudson sang. She looks amazing and  has lost so much weight, I do like her wiggly hair better than her straight hair though.

Then it came down to the bottom two and I was convinced and I am sure Stefano was too, that he was going home, and I will be darned Casey was going home and I was like crap, my prior theory of the bottom three of the top three had to be wrong.  Even the judges and the danged audience and the other Idols were like WTF? Yeah I said WTF? cause there is nothing wrong with saying Fudge. Ha!

Then Casey had to sing for his life and I knew the judges would save him, and I had tears in my eyes as he started to sing, and I think he got out like 5 words and then the judges were like "Stop! Stop!" They said they didn't need to hear him they knew he belonged on the show so they used their one time save on Casey and he was flabbergasted, and I thought he was going to pass out. Next week will be so good, but 2 will get voted off, I wonder what they will sing? I thought they used to tell us.

They decided at the end that there will be the Top 11 traveling, so that was cool. Heck what's one more person.

So what an amazing night eh? And I think my BFF Tracy needs to move to Arizona so we can watch together, OR she needs to tape it on her end and then watch it three hours later with me. Right?

Well I am headed for bed, gotta get up early finish cutting card stock, plus I have a workshop tomorrow night and am looking forward to meeting some new gals.

Have an awesome Friday and thanks so much for stopping in.