…were smiling down on me. Two things that I had seen months ago were still there today and I snagged em and one almost made me cry when I got it and I think I did skip as I took it to the truck.

A few months ago the antique mall had a parking lot sale, store vendors and probably just anyone could set up tables and sell stuff.  I remember seeing this box back then when I was with Lauren and I can't remember if I picked it up and looked at it or not, but I already had my shabby chic cup and saucer thing for my punches so I thought I was all set.  But after realizing it was not going to fit under the cabinet for my punches (I don't want to hang the new style on the IKEA bars my black ones are on), I knew I had to find something new, or just leave them inside the cabinet. So I measured the space I had and I even put a punch in my purse and off I went to the antique mall. There was a danged old parade on Main Street so I didn't think I was ever gonna get there, but I was determined, it takes more then a parade to keep me away from antique shopping.

I picked up a few little jars for my embellishment cabinets before I got to this booth and I saw the box again and I was surprised to see it, I don't know why no one bought it before…and I measured it and it was the right size, and the punch fit in there perfect.  I asked "how much?" and the guy said "$35.00" but before I could say "what's the lowest you will go?"…I see that on the Cash & Cari show…he said "I will take $25.00", and I was like sold, well I didn't really say that, but I said "I'll take it", he explained where it came from and I showed him what I was gonna use it for. I could hardly wait to get home to clean it up and see how it works, what do you think?

Look how great the punches fit in it. I love it! My little tiny ones and the border punches don't but that is ok I have them up in the cabinet.

I also saw this cute chandelier a few months back, probably the same day as I saw the box. 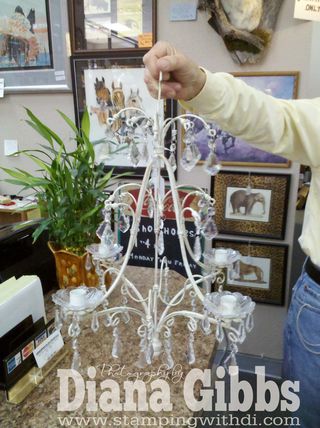 I didn't get it and I have been thinking about it ever since, so today I went right to that booth and it was still there, so as I was trying to get it down, a girl came in and was like "Hey Mum look at this light, and there is one over here too" and oops I was already getting it, so it was fate.  She ended up buying the other one that is electrical.  This one is for candles and I want to put my little battery operated ones in it, I am wondering if I should leave them that mustard waxy color, or try to dip them in white wax.  I have an idea where it will hang when the room gets done.

I also got more jars… 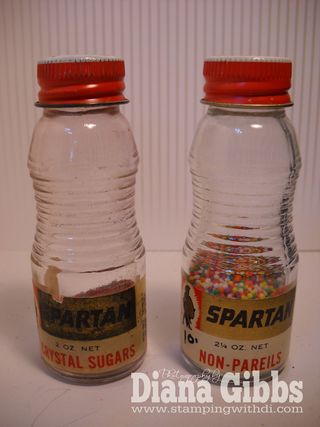 …the little ones that are non-pariels or something for baking, even had the cake decorations inside, I thought great, I'll use them for my Open House cupcakes…ha! Just kidding. I told that to Jeff and he looked at me like "what? aren't they old?" This coming from a man that chews tobacco…ugh. At least it aint wacky tobacky but still…blech! I dumped out the stuff and washed them up.  I love jars with old labels or writing on the lids.

Quickies and Coolies…wow that is quite the names of facial cleansers eh? 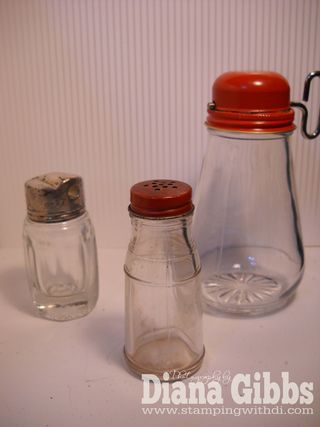 I also picked these up, not sure what the silver lidded one was for I am thinking maybe like sugar or something, the red lid was some sort of maybe cinnamon, and the red lid with the turn thing is a nut chopper.

Of course I found some more ball jars, and the one on the left had a lid I had never seen before. I bought it from a deaf lady so I couldn't ask her about it. I'm deaf but I don't know sign.  Well I know a few sign language words, some are used when someone cuts you off when you are driving…ha! Others were words Eric was taught as a kid, cookie, milk, lizard, wait, now, Mum, Dad, Grandma, Grandpa…stuff like that.

Cool eh? There is metal but the inside lid thing is glass. 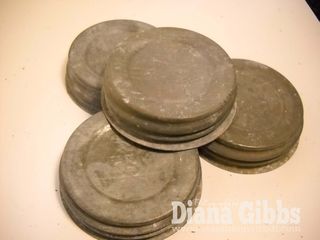 I also picked up some ball zinc lids, sometimes I will find a jar with no lid, and also these are neat to put stuff out in class, like buttons or stuff.

Wow as I sit here typing the wind is really kicking up, and I can even feel a breeze coming in. 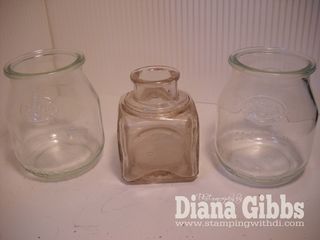 Here are a couple little creamer jars ( I love these) and a little ink well jar. 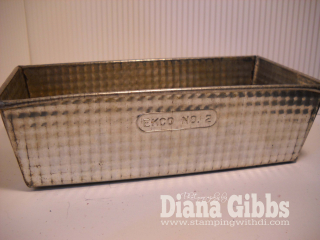 I found another cute little bread pan, and I already painted it up vanilla and it's in the drawer with markers in it already. 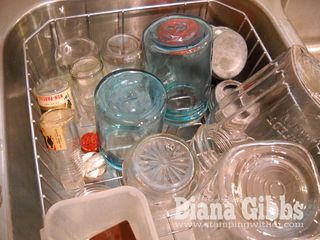 So after I took the pictures of everything, I went and washed them all up and got them clean and tidy to fill with embellishments and what nots. 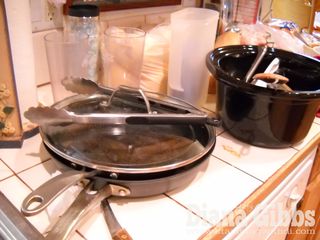 Don't you love my priorities? These are the dirty dishes from last night, I had to take them out of the sink to wash my antique finds…ha!

So after I got home and fixed everything up, I was finishing cutting paper for my workshop tomorrow and Mark called to say he was on his way.  He was brining some drawer fronts and cabinet fronts, and my glass cabinet doors, I was surprised he had them already cause he just dropped them off at the glass people yesterday. So as the guys were working it was funny to listen to Mark as he laid on the floor underneath my cabinet figuring out how to make the drawer fit under where I sit with my computer.  I told him that I could not do what he does with all the measuring, and then he said "every craft has its tricks, you probably have them for making cards too" and then I thought I guess he was right.  I was explaining how I measure in dits, and he just smiled…what a nice man. 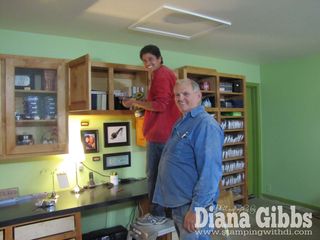 Here's Jose (on the ladder thing) and Mark. Smile pretty, boys! They are probably secretly thinking "she measures in dits! Ha!" 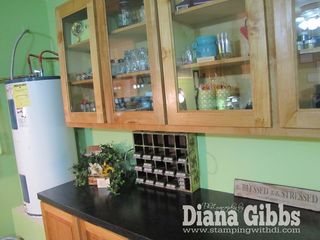 Here's a little sneak. I can't get over how big the room looks now, everyone that comes to class says the same thing.  By the middle of next week we should be all done…my Open House is the 5th so it better be eh? Too funny, my friend Lynn from Paper Craft Planet asked me if that was a still in the corner…ha! Can you imagine?  You won't see that in a few days.

I had the new Karate Kid movie on tonight, I had seen the original years ago and loved it, but this one with Jaden Smith (who looks so much like his Dad) was such a good movie, I loved the story line and everything about it.  What I didn't like was (and basically it has to be this way cause that is the movie) that chinese kid looked so mean, and when the ref had to keep dragging him off the pointy haired kid, why wasn't he disqualified that could not be fair, and that teacher that was teaching the bad boys should be ashamed of himself.  I really hope this is just a movie and this stuff does not happen in real life. I loved the ending where all the bad teacher's kids bowed to the good teacher, that made me cry, and wasn't that little girl that the Karate Kid liked adorable?

Well I need to stop blabbing and get stuff packed so I can hit the hay and get up early for my workshop.