…not a Butcher, a Baker or Candlestick Maker.

Today proved the Baker part. I was going to make cupcakes for my cupcake classes this weekend, I even bought cute little colored liners and even a thing to take out the center so you could fill it with yummy goodness.  But did I? Make cupcakes? No, I thought hey I wanna make cupcake pops instead. In fact I had picked up the dipping chocolates and the lollypop sticks earlier in the month.  I got a cake mix, the icing and sprinkly things the other day.  I thought how cute would these be?

Well it started out ok, I baked the cake with no problems, it smelled yummy.  I let it cool completely like it said to do. 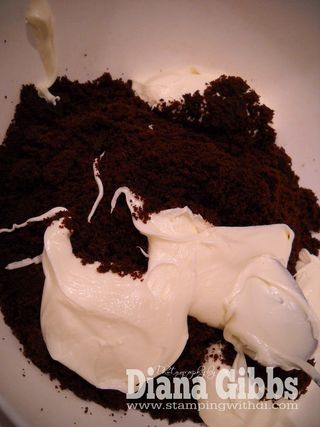 I used a food processer to crumble up the cake, I added the icing like it said, and I mixed it all up well.  Then I made them into balls, and put them on parchment paper and put them in the fridge for an hour to cool. 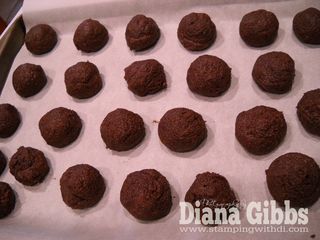 They really look like cake poops instead of pops at this stage…ha! But when I was all done and cleaned out the bowl before I tossed it in the sink I tried it and oh yum! Very good! 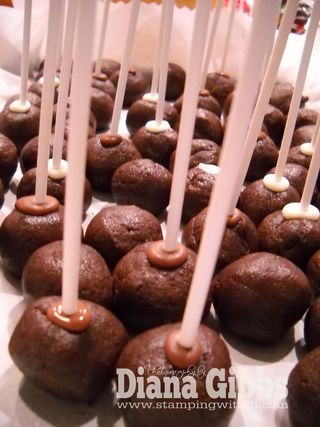 So I let them go into the freezer for 10-15 minutes.  I reheated the chocolate and tried again and this worked way better. 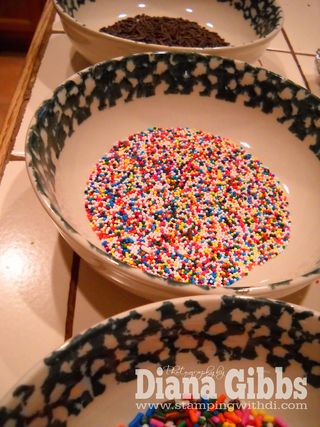 I had my toppings all ready to go after dunking. 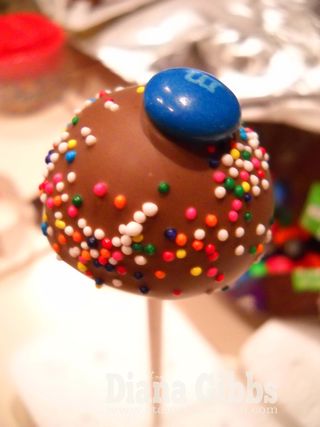 Isn't it cute?  If you clicked on the link I am sure you saw that they were supossed to look like a mini cupcake. Well that was not working for me. I was using an old aspic shape thing and it was not working right, if I ever do them again, I think I need to use not as much icing (cause I think they were too soft) and I will need to get the little cookie cutter thingie Bakerella mentions, or I won't put them on the stick and just have them like individual truffle-y things. Cause they sure do taste good. 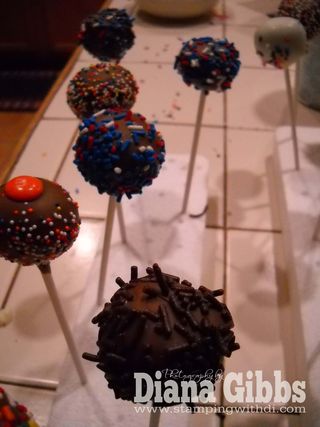 Luckily I had some styrofoam left over from my Decor Element frame so I had something to stick the pops in while they dried.

As I was doing them I sent Ellie a picture so she could see what I was doing.  She said "wouldn't it have been easier to make cupcakes?" and I was like Yep, I could have made 6 dozen cupcakes in the time it took me to do these. 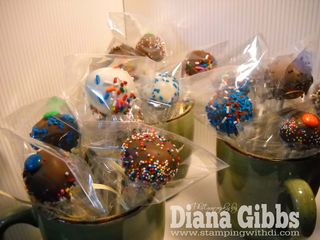 I baggied them up and tied them with ribbon, they would look cuter if I had curly ribbon but I am sure they will taste just as yummy without it.  I hope the girls enjoy them and know that my intentions were sincere and I wish they had of turned out like I envisioned.