The start of the mutilating of the chocolate bunnies. 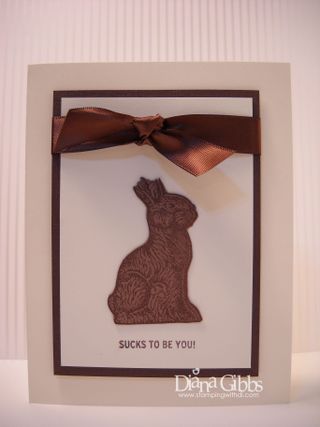 that started it all…well you can't get this little guy in rubber anymore, but you can get him digitally for only $1.95, how cool is that?

Do you ever say "if I was a fly on the wall" like you could be somewhere to see things happen and no one knew you were there…our friends at Wikipedia say this:

"Fly on the wall is a style of documentary-making used in film and television. The name derived from the idea that events are seen candidly, as a fly on a wall might see them. In the purest form of fly-on-the-wall documentary-making, the camera crew works as unobtrusively as possible; however, it is also common for participants to be interviewed, often by an off-camera voice."

Well there was a fly on the wall in the shower with me this morning and I was like who the heck is that? I flicked a bunch of water at him and he buzzzed off. No peep shows today Mister!

Well my old noggin' is achin' so I am headed to bed.

Have an awesome Monday and thanks for stopping in!