Today I thought I had better update my blog header, it has Christmas stuff on it. I wanted a better picture of the girls without the danged old chicken wire in the way so I figured I would just open up the coop and click away, I knew they would come right over to me…I mean they know where their food comes from. So let me show you what happened.

I just opened up the door a bit and there they were, innocent little chickens, as you can see Stella is half out the door already. 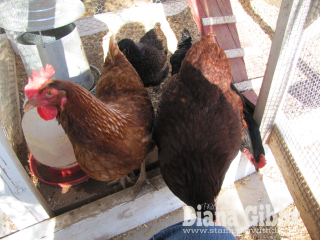 So you can see my knee there on the bottom I was trying to keep them in the coop. Just a few pictures please, I will give you some fun treats! 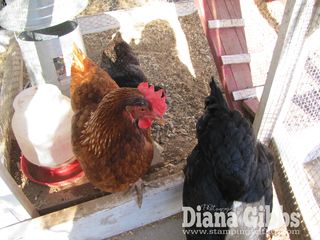 You can see how good the old knee trick worked Stella is out and Alice is on the way, Clara even has one foot on the door ledge and she is clucking "freedom!"

There goes Clara, Gertie is just waiting her turn. The other three seem to get along better, once Stella started laying too, then those three don't seem to pick on each other, I wonder if that will happen for Gertie too, she still is not laying.

So they head right on over to where the grass weed stuff is growing, and it is so funny to see them run, and to listen to their fun contented clucking. 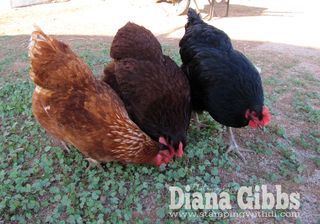 See how these girls hang together? Clara, Stella and Alice.  It's like one finds something to eat and the others are like "What you got? I think I saw it first!" This will probably be the one I put on my header cause even though they are looking down it is in focus and I like you can see their different breeds. 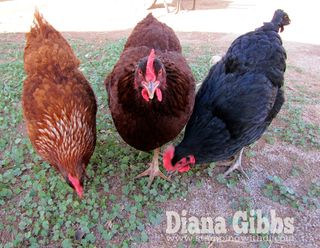 I almost put this one on my header cause Stella was posing but the other girls are a little blurry, I wish all four were in it, but what can ya do… 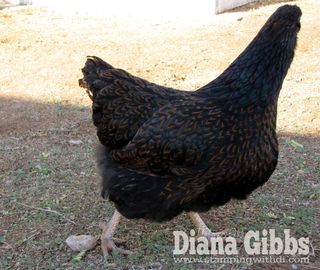 …Gertie made it clear that she was not interested in getting her picture taken.

Then I had to go around and one by one get them back in, Gertie went in last, she still is not as tame as the other three. Again I wonder if that will change when she lays.

Well I hope you had a fun New Year's Eve. We watched Clash of the Titans, it was really good. I love listening to Liam Neeson's voice.  We ate a late supper so I never even made popcorn. I now have 11 days to lose weight, I got some new jeans for Leadership in Nashville and losing weight will make me feel better, and well the new year is here right?  My little sister Jax said (I might have said this before) It is not the food you eat between Christmas and New Years you need to worry about, it is the food you eat between New Years and Christmas.  So that needs to be my new motto.  I did however definitely feel some butt muscle and calf strain the day after painting the ceiling, going up and down the ladder sure gave me a workout, now to keep it up…not the painting and ladder climbing, but I really have no excuse not to at least get on the treadmill every day right? I know it's freaking boring, but I aint getting any younger.