…so at least it's a prairie dog…but still he's got to go.

About a week ago when I was walking out to the chicken coop I saw a hole right beside the walkway outside the back door and I thought maybe a rock did it. Jeff put down this black stuff before he put the rocks to keep the weeds out, and I thought a rock just punctured it.  So I showed Jeff when he got home and he kicked rocks over it to cover it, and he said maybe a mouse or something, and I was like something…what is something? Like a spider (we have tarantulas, but not like when we first moved here), or a snake, I was just picturing coming out at night with Toby to go potty and a snake would be there.  So for a few days the hole stayed covered with the rocks Jeff pushed on it.  Then the other day it was uncovered again, so I kicked a few rocks on it and then I raised the blinds on the door so I could see better and I kept going in the house every so often and checking.

So a while later I looked out and there was the varmint, a little prairie dog and he was digging to beat the band to move those rocks, so I quietly opened the door and yelled "what do you think you are doing!!" and he dived into the hole.  The little creeps dig and are under the back patio, you should see the rocks they have pulled out from under there, and we are lost as to what to do.  I told Jeff I was tempted to throw some moth balls down the hole and then cover it up and see if that will solve the problem.

Today I got all set up for class tomorrow and I also made a few little gifties for Leadership. I still have to make a few swaps.  So I wanted to show you a few more months of my 2011 Desktop calendar. I'll just show you the pictures cause I was a dork and didn't even think to decorate the actual number part of the calendar..doh! 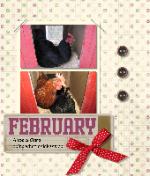 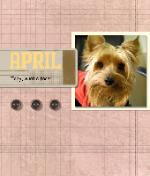 Sorry they are small, that is the size they copied over to from MDS, it is probably something I did wrong..ha!

I keep laughing at this Target commercial

You can almost smell it can't ya? I love how she shuts one eye, in a funny way…not in a freaky Kathy Lee Gifford one eyed shut face. That gives you nightmares.