…a little paint, some glaze and a brad can make.

Do you remember this?

I showed you it last week. I picked it up at an antique store, it was $9.00.  I told you it wasn't old cause it had a Ross sticker on the back, but I loved it and I could see its potential.

Well today, its potential blossomed, and you won't believe how great it looks. I'm a little biased.

You know I'm gonna drag it out right? That's just me. Ha!

So I took my blue green desktop doohickie outside.  I put an old Christmas plastic tablecloth on top of the picnic table in the back yard, I learned from leaving a spray mark on the side walk from shabby-ing up my frame.  I had picked up some Rust-Oleum Painters Touch Satin Heirloom White spray paint about a month ago.  So I knew I would use it, there was no way I was gonna try to use a brush on all those bumps, plus getting inside was gonna be tricky. I sanded it down with a sanding block before I painted it, not like to get the blue green off, but just to rough it up a bit, and to remove any gunk from stickers. 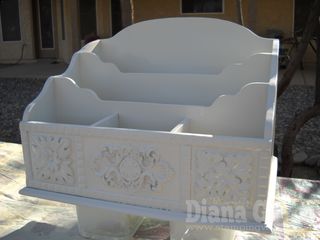 So this is what it looked like after I spray painted it with the Heirloom White.  I almost left it like this as I really liked how it turned out, but I knew the glaze would make the molding stand out.

Look how cool the front molding looks painted up.  I dug the ugly green bead out of the center, I had other plans.

What a dork I am..this is added after my original post. I told you the spray paint name and forgot to say the glaze.  So at Home Depot I guess they don't sell ready made glazes, so I got a glaze and the paint separate and I mixed them.  So the glaze is Behr Premium Plus with style Faux Glaze and the paint color I mixed with it is Blanket Brown.  That just was the closest I could get to a cabinet I liked the look of at the store.  I have heard that other stores sell like a glaze that is already colored.  But anyway, I mixed it 4 parts glaze to 1 part paint. Then I stirred it up.  I applied it to the piece after it was dry, with a brush then rubbed it around and actually you are wiping a lot off, with an old t-shirt of Jeff's. I also used a dry brush in the cracks to take the glaze out.  Oh and I also added a bit of water to the glaze mixture and sometimes I took a wet paper towel and used that too as it keeps the glaze a little wetter longer. I would just practice first.

Here are the other two molding pieces, I didn't even realize they were different. 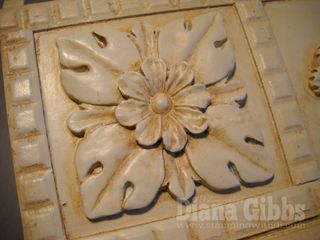 This one has leaves and a flower in the center.

So here is some before and after pictures, I love doing those. 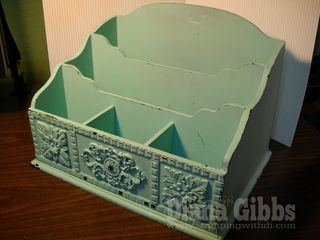 Before, I tried to get the pictures at the same angle. 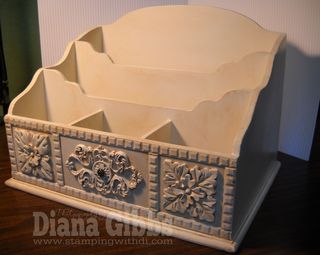 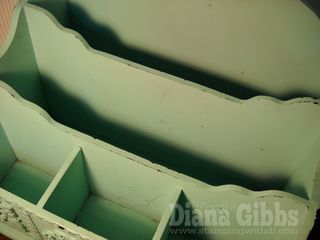 Before, I cleaned and washed it out as best I could, it had pen marks and dust and stuff in it. 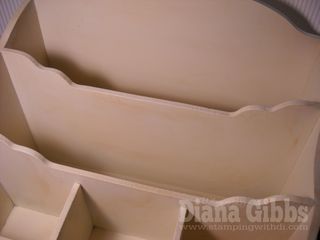 After, don't look super close, this was only my second time doing anything like this, and it ain't perfect.  I think if I put pencils in the front I want to find a little cup to put in there so it does not get all marked up.

Before with the ugly green bead.

After, with the gorgeous new jewel

Remember I said I was going to remove the green bead and add a pearl? Well the pearls were too small and I thought an antique brad would look so much better.  I was right eh? I cut the little legs off the back and I hot glued it in place. 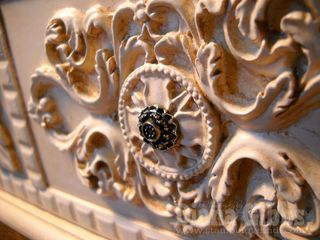 It looks beautiful doesn't it? The little bumps of the brad mimic the bumps of the molding that surrounds it.  I can say I had it all planned, but really it just ended up coming together.  Sheer luck.  I totally am no professional and the job is not perfect, but I love it and can hardly wait to put it on my desk with my catalogs in it.  I want it to sit over night before I put anything in it. So not a bad deal for $9.00 and some paint eh? It probably took me maybe three hours at most to do, with drying times in between coats and all that. It was beautiful out today so it was the perfect day to do it.  The girls serenaded me as I did it.

Well since I got to bed unbelievably late last night I am going to say nightie night now. I hope you enjoyed seeing my fun adventure from today.