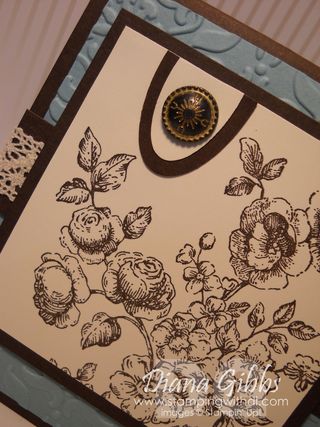 So after having fun last night checking out the Goodwill stores, I thought I would check Craigs List too, and I found a couple metal desks, it was not what I had in mind, but if they were in great shape, I would definitely go that route.  I was thinking how cute they would be with some Decor Elements on it or stencils.  But the ones that I went to see today were in rough shape.  Jeff had today off so the poor guy got roped into driving around.  What was weird is we were in this great neighborhood in Mesa and there was a coyote running around the neighborhood. Kinda scary. In fact the man that had the desks he had his little dog outside and a man drove by and said "you better watch your dog, there is a coyote" and sure enough it was coming down the street. It finally turned around and I don't know where it went.

So then I had texted another person (ended up being a guy) about a side table they had for sale, it was not too far from where we were so we headed over there.  We were about half way there and the guy called me and said "this lady has been bothering me about the table from Payson or Sedona (I can't remember but that is hours away) and I told her that you were coming over to see it and she said that she would pay me $30.00 if I would hold it for her, so would you want to match that?" and I was like "um, no I have not even seen the table". So I get off the phone and I told Jeff "I think the guy is playing games, and I aint playing" so then I explained what he said, and Jeff said "offer him $15 bucks" and I was like no, I was prepared to pay $20.00 cause that is what he listed it at.  So anyway we get over there, and the little table is outside on his deck, and he washes off the top. It is really cute, and I check it out.  I tell him "I will pay you $20.00 cause that is what you listed it at" so then he says "well I have this other lady" and I'm like "yeah you told me". Then he goes "ok, you can have it, cause you two are here." So I paid him and thanked him, we loaded it up and we were off on our merry way. I don't know if he was making this lady up or what, but I knew what I was willing to pay and I stuck to my guns. This was the first time I have done Craigslist, so not sure if this is common or what. 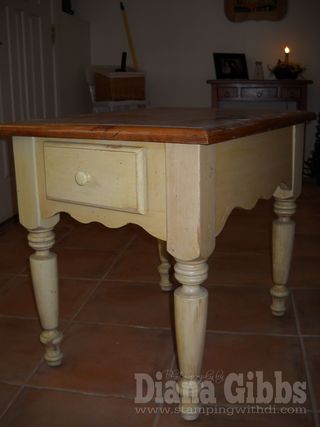 Cute eh? It already has that shabby chic look to it, I still will probably paint it to clean it up and add my glaze, I think I also want to sand the top and stain it. 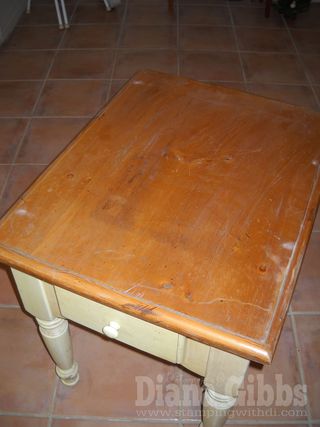 It's a little rough, it looks like a crack in the corner there, but it is like a gouge from a pencil or something, but I think a good sanding and some stain and it will be great.  Did I do good for my first time?  I wanted to go look at another table a different style but it also had four legs and the little drawer but I wanted to paint them the same to make them work together, but the guy took too long to get back with me about an address so we already went back home.  Note to people that advertise on Craigslist, put a phone number or check your email frequently. I'm just saying, I might have bought the other table too…ha!

So this amazing card I am sharing today was swapped with me at Founder's Circle and it was made by Cara Brandse, she is a Canadian Demonstrator and so stinking cute!  Thanks for the card Cara, I love it! 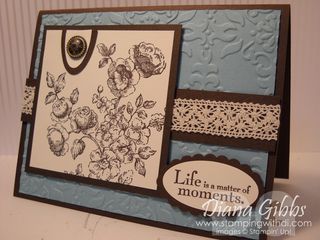 Well I am gonna be quick and sign off the lights are flickering, we had a power outage a week ago and I don't know if that is going on again. My battery back up dealie, keeps clicking.