This Tutorial is $3.95 and contains 7 pages of step by step instructions and color photos for Water Coloring With Ink Refills. The tutorial will be emailed to you as an Adobe PDF file following your purchase. 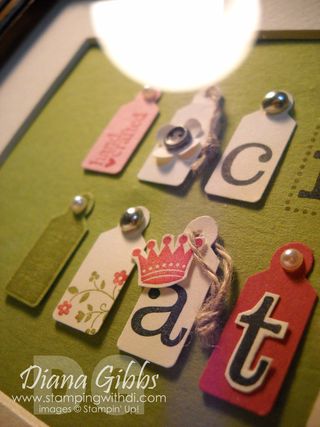 What cat? I thought it was funny to take the picture so the word spelled something else. In fact it was kinda fun taking different angles, and try not to get the danged light in it, or the camera lens and heaven forbid a reflection of my nose.

There is a card in the catalog like this and it spells out the word friend.  I wanted to make a framed one of these for my studio, but I was like "well gee I can't make myself something that says friend" that would be too weird, I mean I know they say you got to love yourself and all that, but I stop at making myself a frame that says friend…freak maybe but not friend. 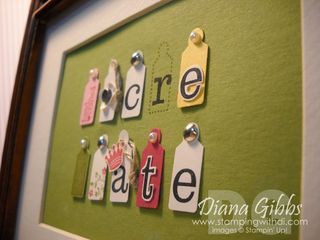 So I thought the word create has the same letters as friend so I could basically do the frame like the card. I loved the little embellishments. The letters were not too hard to cut out, but I just took my time. Gotta love my paper snips! 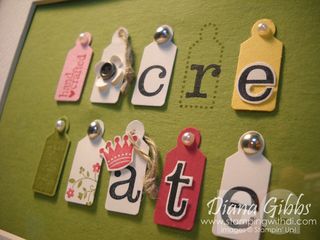 I kept taking pictures, it was neat to get really close and to be down low and then you can see the little tags and how they stick out and the pearls and brads, and linen thread. This was fun to make.

Here's what it looks like in the frame, I had to stand back to take the picture.  I am undecided if I want to mess around and shabby up the frame.

So yesterday I talked about the time 11:11, and I had a few people email me and say that that time means something to them too.  I remember when we lived in Mesa years ago when Eric was little.  One day, off he goes to play and we were like where did he go.  He comes home later and we are like where were you playing and he was like "Three Five".  We are like ok.  You know Eric has a speech delay as part of his disability, so we thought nothing of it.  So next day off he went to play again, and I think he brought "Three Five" over to play too.  We found out his name was Phillip, but that was too hard for Eric to say.  So eventually we were like we wanted to see where he lived so we walk on down the street and guess what?  Phillip's house number was 555 so to Eric that was "Three Five".  I remember reading to Eric when he was little and you would be trying to read and he would be pointing out all the "and" words on the page.  Things like that, he notices things other people don't.  So here is the funny part, we all just called Philip "Three Five" and when Phillip started school, on the top of his paperwork after he printed his name, his Mum told me he also put 555.  I love that story.

Well I am headed to bed, morning comes early.

Have an awesome Saturday and thanks so much for stopping in!