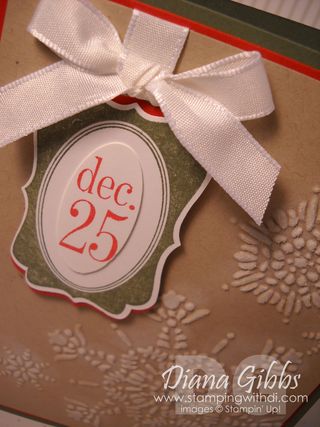 Right now as I type this (it's 10pm on Thursday night) I am unsure if I will be heading out early to brave the crowds and madness to get that great deal when there is only three items in the store at that price or some crazy thing like that (I heard that on the tv).  I say there will be specials later.  I do need a laptop and maybe I would get a great deal, but won't there be deals near Christmas too or later in the afternoon?

Those of you that have signed up to receive my email newsletters (if you haven't, to sign up its in the left column and says "Sign up for my Email Newsletter and it has the little envelope beside it) have already received your email from me telling you the great deals I have today for Black Friday.  I figured I wanna spread a little cheer too, plus if you are like me and want to hang out leisurely in the morning drinking your coffee, why not take advantage of some online deals right?

I do know I am going to go to a movie with my girlfriend Melissa (hey honey I am not wearing my Eclipse shoes) in the afternoon.  We are just undecided if we want to shop a bit before or after. She is more on the ball then me she actually had the sales ads and was looking at them.

So I wanted to show a quick card that will be one of the ones the girls do at my Stamp a Stack of Christmas cards, and this one is actually the one that Colleen Magness did for her Founder's Circle swap, (I said one of the ones I posted earlier was hers…oops! well it was the same embossing folder and no one corrected me…ha!)  I used less bling then she did since there will be 70 cards made in this style. Thanks Colleen for the awesome card to case! 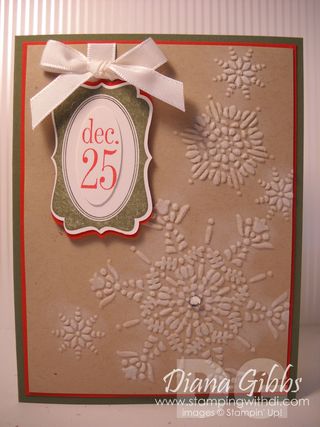 I am not sure I showed you this yet. It was hard to take a picture of, I really need to get higher back ground things.

I picked this up a couple weeks ago on one of my antique shopping trips, I just love the look of it, and I am not sure where I am going to hang it.  I want to put my battery operated candles in it so it will flicker and add ambience to my studio, it came with the real white candles.  But when Lauren and I were out last weekend I found a different one that I really really want to go get.  It was shabby chic and had like crystals hanging on it and I just keep thinking about it.  Not sure where I would hang either, but I just love them.

Well this old gal is gonna hit the hay just in case I end up getting up early after all.

I hope you all had a great Thanksgiving and are ready for a nice relaxing weekend.  Have an awesome Friday and thanks for stopping in!

I am a Wife, a Mum and a Stampin' Up! Demonstrator. I have been married to my husband Jeff since 1984 and we have a son Eric who is almost 34. Eric has Autism so being a Demonstrator was the perfect job so that I could be home when Eric got home from school and still earn money to help with the household budget.

I have been a Demonstrator since 1999 and it has changed our lives so much. I never imagined getting up and talking to people, I am deaf (I wear hearing aids) so talking to strangers has never been a fun thing for me. But put a rubber stamp in my hand and I will talk to anyone.

Just so you know...
This is a personal website of Diana Gibbs, an Independent Stampin' Up!® Demonstrator, and I am responsible for its content. Stampin' Up! does not endorse the use of or contents of the classes, services, or non-Stampin' Up! products I offer here. All content (including text, photos, and design work) is © Diana Gibbs. My original artwork is shared for personal inspiration only and may not be copied for any publications or contest submissions without my permission...Thanks!