Jeff and I got chatting the other day (or maybe it was just me) but anyway we (I) decided it might be nice to add onto the coop to give the girls (a.k.a. The Gnomes) some more room to run around.  We don't want them to be free range chickens cause our property is only fenced in almost all the way, but where you drive in it is not, so from time to time we have dogs, cats, coyotes, you name in wander in here, and I would be sick if anything happened to them. So although it might sound mean to keep them caged at least they are safe from harm.

So Jeff designed a cool run and went to Home Depot to get the wood and wire. 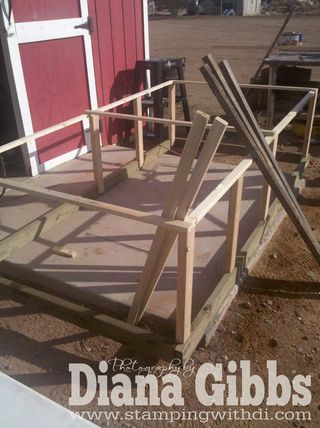 Then he started building, the weather is definitely nicer then when he built the coop (probably 50 degrees nicer).  He has a bunch of days off so he has been busy around the house…and coop! ha! So this took him no time at all to make, I can say that cause I stay in the house and stamp or do house stuff, and only go out once in a while to make sure he has not nailed himself to anything, so it really took all day. 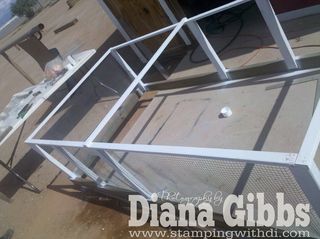 Then the next day he went back to the store and got paint, more wire and latches.  At first he was gonna make a door on hinges so that when I need to clean it, I would lift it up and step in to clean. But then I was like why don't you just make like a lid that you can remove so it latches down, that would be easier. And he agreed that it really would be easier, so that is what he did.  Then he had the neighbor help him carry it over to the coop. 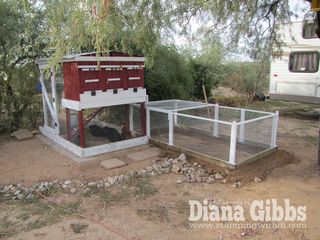 So they set it in place, and the girls were checking it out through the wire.

Alice: Braack!! Looks like someone's moving in next door!

Stella: Braack!! I hope their nice!

Gertie: Braack!! I hope their cute!! 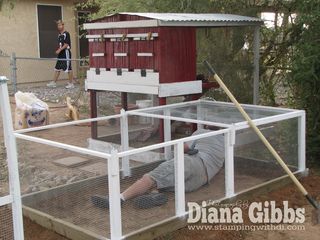 So Jeff climbed inside so he could cut away the wire from the coop so they could go back and forth between the two.  I will also have a way to close them off, so when I clean them I can lock them in the other part and not have to worry about them getting out.

Alice: Yeah but he's not my type.

Stella: Isn't he with that female that feeds us?

Gertie: Hey handsome, I love mustache rides!!! (we don't call her Dirty Gertie for nothing) 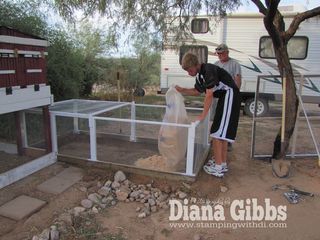 Eric dumps some of the pine shavings inside.  We don't have to spread it out, as I have learned the girls take care of that themselves.

Now someone (me) had to go inside and explain to the girls how it works, and that person (me) had to climb under the ramp and under where they lay to do this.  This person (me) did it cause they are pretty tame with me, and the guys are too big to get under there.  So I got them so they knew how to go back and forth, and they were like really liking it. 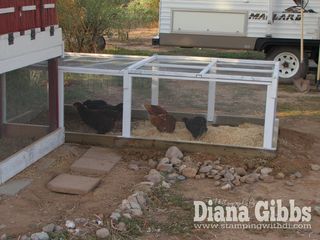 So it didn't take them long to start scratching down the pine shavings and starting digging their new digs. 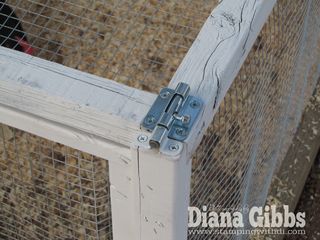 Jeff put one of these in each corner so we can remove the lid, and so they are secure.  I asked Jeff "how will I know which way it goes when I go to put it back on?" and he said "I marked it".

Just like a man…this is how he marked it: 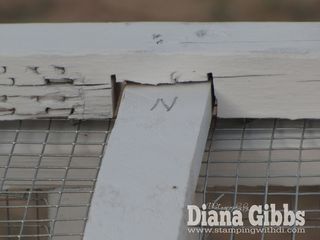 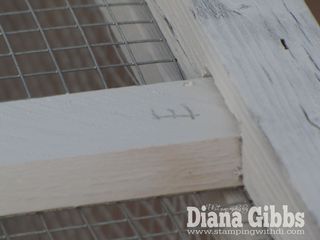 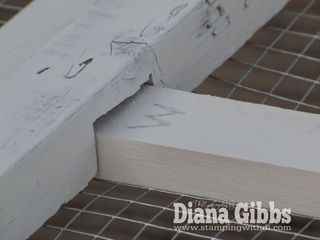 I had no clue that the RV trailer was facing North, well I do now. I suck at directions, I'll just be spinning the lid around till it fits..shh!!!!  In fact that is how I know what is beside North..cause I say in my head Never Eat Soggy Wheat.  When I drive, I am like saying that in my head.."now I am turning Never (north) Eat..so this is East" Yeah bet you can't wait to get in the car with me eh?  ha!

Look at them checking it out.

Clara: Hey this dirt is much more fresher!

Alice: I found a bug!

Stella: Hey now I can strut my stuff!

Gertie: Where the heck are the guys?

So you can see the girls in action, I took a short little video.

Hope you have enjoyed checking out the girls. We sure are enjoying them!