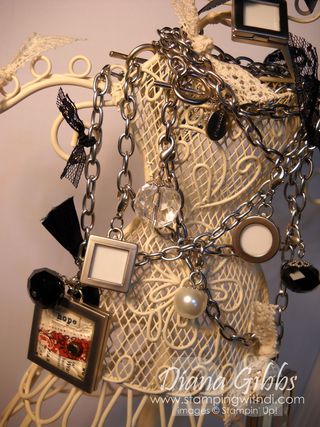 Today I had to run a few errands so I zipped on over to find a couple things I have been looking for.  One of them was a wire dress form for me to hang my simply adorned charms and baubles on.  I still need to fill some of them (obviously eh, as they hang there naked!), but I wanted to show how cute it looks. I really need to get a taller background for taking pictures. 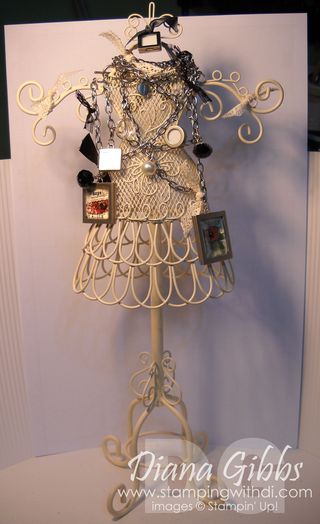 I love it and I love the vintagey look of it.  It is too tall for my red shelf so instead it sits over on my corner table. I found this one at TJ Maxx, but I have seen them at Ross too (I love those discount stores).  Beside TJ Maxx is a craft store, and I also was looking for a glass display to store my cupcake that Selma made for all the Founder's Circle attendees.  It is not exactly what I was looking for, but it is still pretty cool.

This will keep the dust off of it, and kinda give it almost like a pedestal to sit on. In fact they had different ones on pedestals that I almost got and then I was not too sure if they were too tall for my shelf too, and then I was afraid they would get knocked over, so I went with this one.  Plus I can always put something different in it later and have some height to it.

What do you think? It is freaky looking through the glass eh? Kinda warped!

Today my girlfriend Sharon came over (hey sweetie), she had made the cinnamon rolls I had put on my blog before and they did not turn out, so I said come on over and I will show you how to do it. She is so fun, for one her bread maker made a smaller loaf so it would not work, so we used mine, also when she did them before she did not warm up the milk and that is a must, as we were making them, she would say "oh I didn't do that last time!" It was so much fun, I pretended to be Julia Child.

So while the dough was getting made in the breadmaker, we started tieing our material onto our wreath frame.  If you look in the catalog on page 190 it shows a ribbon wreath so we are doing one for Christmas with the Designer Fabric on the mini catalog called Deck the Halls. I will have it done in a few days…ha! It takes some time to tie them all on, plus I wanna decorate it up a bit. 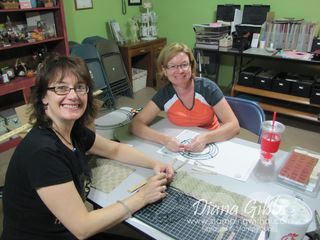 So luckily Jeff got home so he could take our picture.  Smile!!

And Sharon's cinnamon rolls? The best ever!

So I watched Glee, it was soooo good, they did an amazing job right from the beginning with the red lips singing the theme at the beginning.  I almost peed when I saw Barry Bostwick who played Brad, and Meatloaf who played Eddie in the original movie having cameos during the show.  I would have loved to have seen more cameos, but the Glee cast was amazing playing the characters. Thanks to everyone for emailing me to tell me when it was on. Mwah!!!!

I almost got to stop watching Dancing with the Stars, I am only watching it for Jennifer Grey and she almost got kicked off tonight.  Ouch! But they survived to dance another week. When she gets kicked off I won't watch it anymore, I don't really know any of the other stars.

Well I am gonna sign off for tonight, and hit the hay.