I am not much of a drinker, I mean I do drink from time to time, and have been drunk a few times in my life, and even gotten sick cause of it.  But if I drink I like it not to taste like alcohol, so any time I have tried wine it was so bitter, that to me it tasted like beer, and beer is the worst thing I think that man has ever invented.

Tracy and Steve like to drink wine, and they have been on wine tasting trips and said we should go on one while I was there.  I mean I figured there had to be a wine I would like right? It does look so neat to drink out of the fancy glass and all.  So we went to a few places while I was in PA. One day we went to this wine store, and I tried about 6 different kinds and found a couple that weren't bad. 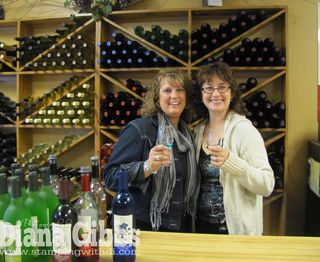 Here we are behind the counter, the sales lady was so nice she said to go back there to get our picture taken. I see by this picture that I really need to hang up this sweater and not wear it for a while, I love it, but it just looks so frumpy, look how cute Tracy is with her jean jacket and scarf. 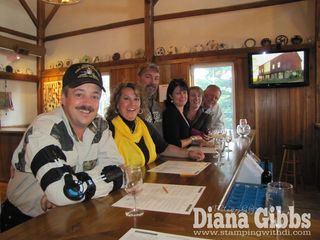 So one day a few of Steve's fishing buddies and their wives came over and the 7 of us took off on the LeeHigh Valley wine tour. I think we went to five different places.  I tried a few wines at most of them but not all of them, I bought some too.  One of my favorite places was right up the street from where Tracy and Steve live and they taught you how wines went well with certain foods, that was neat.  They also had the cutest label and the guy that drew it was the ladies son and he is from Chandler. 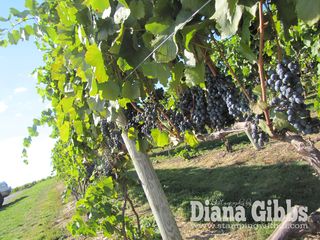 We even sampled a few grapes right off the vine here, I think I prefer wine in its natural form…ha! 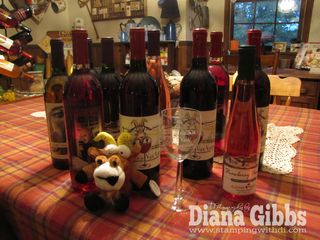 So after we got home we put all our purchases on the table. Bunch of lushes eh?  I also realized half way through the day that I was starting to get sick.  I ended up getting a cold while I was at Tracy's so the last few days I was pretty miserable.

We did watch Dancing with the Stars while I was there, so now we have started watching it at home. I love Jennifer Grey even with her different nose.  She did awesome tonight.  Oh and Mrs. Brady, she was hilarious, but I think she could go home. Oh and what kinda name is The Situation? Half the people on the show I have no idea who they are. I must be getting old.

While the show was on the movie preview for "Due Date" came on, OMG! I can hardly wait to see that movie.  If it is as funny as the Hangover, I'll be wearing my Depends!

So while I was at Tracy's a learned a few tricks, these our just house tricks not stamping tricks.

Got a fruit fly problem? I forgot about these pesty little buggers since I don't think we have them in AZ. But anyway, Tracy put a piece of fruit and a bit of wine in a glass, then she put a piece of saran wrap over top. Then she poked a few little holes in the top.  What happens is the fruit fly goes through the hole and gets trapped cause he can't get back out.  I was kinda swirling the glass around, so they would drown, cause one was smart enough to figure out the hole thing. But we trapped so many in that glass it was amazing.

Steve also has a tip.  Hate buying new razor blades?  Did you know that the razor really does not go dull but actually the soap scum forms on the blade so it does not cut anymore? Well Steve has a little jar of rubbing alcohol in the bathroom drawer (He has a screw lid top so it does not spill). After he shaves and rinses off the razor, he then rinses it in the alcohol, then he taps the razor to get any hairs off, and then he taps it on a towel to dry it.  This way it keeps the soap scum from building up on the razor. I think he said he has been using the same razor for 3 years.

I also have a tip:   Please get a longer skirt or taller boots. I seen this girl in the Chicago airport and you could almost see her bum when she was sitting down, and I was like egads woman.  So what was funny, was we saw her when we landed when Jeff and I were walking to the elevator.  So all I said was "ahem Jeff" and he knew who I was talking about. He said "you wanna pair of those?" and I said "nope, but when I say get a longer skirt or taller boots on my blog, you'll know what I am talking about"

I'll have some critter pictures to share with you tomorrow, oh and we got two eggs today, and that means two girls are laying, but in fact I think the two eggs that Eric collected were from one girl and the two I collected were from a different girl cause they were totally different eggs, I just figured they were getting stronger and that is why they were different.  But today when I went out to check, there were two and they were different, so now I know. Cool eh? Now they laid them in the same nesting box and almost on top of each other, so one was cracked. I had asked my friend Anna Wight who has an amazing farm and blog, and she told me to check their vents and then you would know who is laying.  So I looked on utube to see where actually the vent would be, and then Jeff and I checked them out.  So the ones laying as far as we can tell are Clara and Alice.  Now I just need to figure out whose eggs are whose.  Jeff said it doesn't matter, but me I kinda would like to know ya know? Oh and the cracked egg? Anna said cook them up and feed them back to the chickens. Weird eh? But they loved it, I just wonder what kinda mind games it would be if I told them they were eating something that came out of their backside. It'll be our little secret ok?

Well that's all for me today, I had my last round of Owl punch classes today, so tomorrow I gotta get my weekend class designed and my November classes planned too.