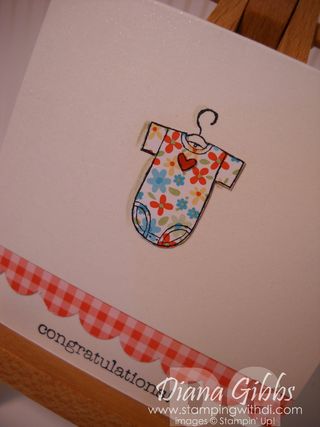 When I was at Tracy's I tried clams for the first time.  We had a birthday party to go to for the little girl that Tracy babysits for. They were serving hamburgers and hotdogs and tons of side dishes and about 500 pounds of clams.  There were these big tubs on the table and we had our own bowls of melted butter, and when they got cooked the Dad brought them over and dumped them in the tubs and then we took what we wanted.  I have had clam chowder before, so I guess this was not the first time I actually ate clams, but it was the first time I took the poor things out of the shell and dunked them in butter, and ate them that way.  They are quite chewy and they don't have tons of taste and they are ugly little suckers (in fact they look like a certain female body part that will go unmentioned) You can google it if you want. I'm a google-r, just ask Tracy. I would like to try them again with cocktail sauce next time.

While we were at the birthday party we saw these humongous horses, the Mum actually has a wagon that the horses pull at weddings and things, and I don't know how many hands these horses were but it was lots. 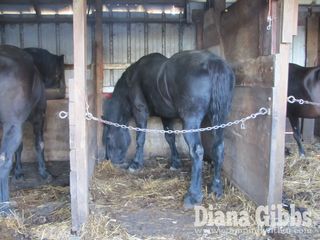 It might be hard to tell how big they are in the picture, but you would need a ladder to get on one, and I think your legs would be sticking straight out cause they sure couldn't fit around the horse like regular riding.

I also saw tons of birds, and even a cute squirrel, I didn't get my camera in time and the picture of the squirrel I wanted was over, and he was back up the hill. From then on I kept my camera by the front window.

We don't have squirrels where we live in Arizona, we have to go up in the mountains to see them. 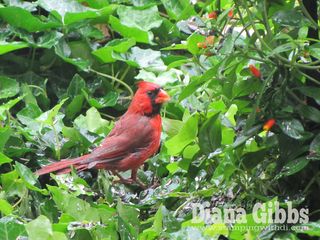 Isn't he beautiful, I love the cardinals, we do have these birds in Arizona, in fact we have a male and female that show up every year, but I have not gotten this close a picture before. Now that I got my bad girl camera maybe I will this year.

Here's the female. Isn't it weird that the males are the prettier of the birds then the female? 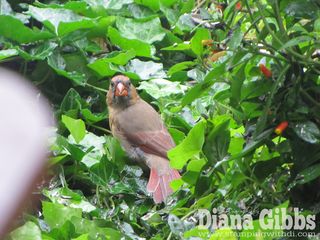 I love this one, I think she is agreeing with me that it is not fair that her hubby is so colorful.

There was also robins, and blue jays, and I can't remember the other couple birds that Steve was saying, they were so darned quick. They also have much smaller wood peckers then we do. I had just missed the hummingbirds, they had all left for the winter. I always tell Tracy that if any of her PA hummingbirds show up at my house they get fed well.

As you can tell by the size of the card I did today, I have been busy.  Little cards mean I gotta be quick. This is a 3×3 card. 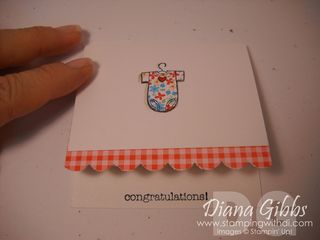 It is hard to tell but the congratulations! is actually on the inside of the card on the bottom.  I dotto-ed the card shut so I could take the full picture. Don't you love the little onesie? So sweet!

Well that is it for me, I gotta get back to work.