I think it was a few years ago that Barbra, Will's Mum emailed me that Will loved my blog, she didn't even know he paid attention till one day he said "That's Di", he is my youngest reader, he is such a cutie and we keep in touch through out the year and Barbra sends me pictures of how big he is getting.  Look at this fun picture of Will eating some BBQ.  Barbra says he loves to make faces at the camera.  He is also a big Star Wars fan.  He won't wear any t-shirt unless it has something Star Wars on it.  I remember when Eric was little like that.  Now I'm the little one as he towers over me.

Will loves trains too and we had a stamp set that retired last year and it had a train in it, so I knew exactly who to give it to.  I picked up a few little things at the store the other day and packaged them up and sent them, to hopefully get there in time for his birthday.

Well they got there quick! 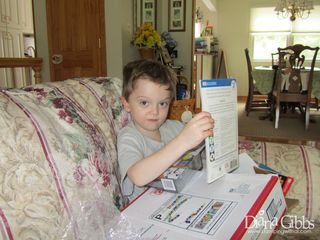 Here's Will opening up his parcel.  I love the look on his face, it's like he is saying "hmmm…what do we have here?"

This one is even better, he is pointing out some of the Star Wars characters in the book.

So how do I know he got his goodies fast?  Well he called me the other day, it was so nice to hear his little voice.  I also talked to Barbra for a while and it was nice to hear her New Jersey accent.

Will, I hope you have the best birthday ever.  Have fun at your party! Have Mummy give you a big hug for me!

So I emailed Feedblitz and asked them about how to fix my blog posts that go to your email address, they are always a day late, so I am hoping they are fixed. So please let me know. How will you know? You can go directly to my blog and see if the email one is the same OR if you are reading and it says "Have a great Friday" and it's Saturday, it is late or you live in another country.

I had to run a couple errands today, I had to go get some DE (some special kinda earth that will kill ants but won't hurt the chickens) and you know I have been cutting ribbons (I have one taffeta I am waiting on and that is it, I will be all done) So anyway, I grabbed my purse after the mailman came, he picked up the parcels that did not include taffeta, and I headed over to the hardware store.  I also stopped at the Deli and got some soup and a piece of carrot cake, oh yeah some funky bread and this stuff you spread on it, they were closed for a couple weeks, and well I was itching for some Deli and it is right by the hardware store, so really it would have been like illegal not go right? Right? I mean seriously I think there is a law that says:

3) if you go anywhere in the vicinity (the Queen Creek area) of the Deli you must go to the Deli.

So I get home and as I am getting my purse out of the truck I notice a big piece of ribbon hanging off the bottom of my purse.  You know how the ends are taped on the spool? Well the tape was stuck on my purse.

So out of all these people I saw did anyone say "Ma'am, you have a piece of In Color Pear Pizzazz 1/2" Stitched Poly-Ribbon stuck to the bottom of your purse"? No they did not.

Well this old gal is taking her Toby and her book and heading to bed, I am going to try to be in bed before midnight tonight. Can I do it?

Have an awesome Friday and thanks so much for stopping in!