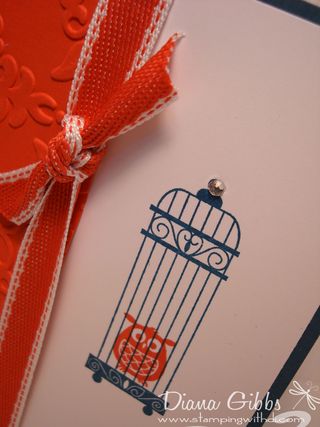 Me!! I didn't think I would when I got it, I mean heck its solid and you know me I would much rather color…speaking of which we have a swap at Founder's Circle and I need to make 135 card fronts…I better get started now eh?

I got this swap card at convention from the very talented Jennifer Turoff, she is one of Robin Merriman's GoDiva girls that she was so sweet to invite me to join.  Jennifer used different colors but other then that I copied it in every way. Thanks Jennifer!

This was so cute I used it for my FLICKs (First Level Incentive Card Kits) for June sales. 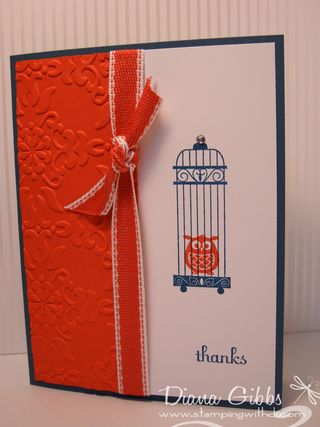 Ink: Not Quite Navy, Poppy Parade

So today we switched from our internet provider that we have had for years over to Qwest, I have not called the old company to cancel "just in case".  I have not been happy with them for so long but we had no other choice out here that was all there was and they knew it, so they were not super with the customer service either. So when we got the brochure that Qwest was out here I was so excited, not only is it cheaper, but it is faster, and lately with our old company it was so slow it was like the internet would give up trying to connect, and it would give me an error message.  So I am crossing my fingers that this works out.  I will call in a day or two and cancel the other one.

Tonight I watched America's Got Talent, I don't usually watch it, but there is a Hip Hop violinist Lindsay Stirling on there. Not only do I love the violin, I used to play in school and I have my Poppa's violin that he left me when he passed away. My bucket list has me wanting to learn to play again.

But the hip hop violinist actually played with the Charley Jenkins band at Convention, I was so excited when I saw the bus drive in the back of the convention center, cause I am a total Country girl and this music was gonna be right up my alley. They were all in the green room when I finished my last days demonstration and said I did great, I was like gee thanks, and I quickly grabbed my stuff and left.  They had watched us on the TV in there.  So when Lindsay was on stage, I swear all you saw was her, she was amazing and danced around and played and it was the first time she played with them she told us later as she mingled around outside.  They told us she was on the America's Top Talent so I wanted to see her on there.  My BFF Tracy texted me to say yes she was on tonight, I guess those three hours difference sometimes are good…most of the time they are not.  I won't lie I did not like her performance on tonight's show.  Ozzy's wife said she would be better with a band and I am like "yeah!!!" cause she was amazing, so I am sure if she does not win this tv show I hope the Charley Jenkins band keeps her, or someone else does, maybe my Ryan Shupe & the RubberBand could add a cute little chick to their band.  She is originally from Utah.

One person I did like the sound of on the show was Taylor Matthews, I only watched a few acts and turned it off.  I am bad and won't be voting on anyone.  I don't particularly care for this show, maybe its cause we don't go to Vegas, and a lot of the acts are way over the top. I do love Howie, I met him years ago at the Calgary Stampede. Jeff and I also saw him in concert (do you call it a concert when it is a comedy act) he was so funny, that was when he would do the cartoon Bobby's World so he talked like Bobby.  He had a little bit more hair then…ha!

Well I am gonna sign off for the night so I can be bright eyed and bushy tailed for my Trilogy ladies in the morning.

Have an awesome Wednesday and thanks so much for stopping in!

To order the Stampin' Up! products shown here, my on-line store is open 24-7