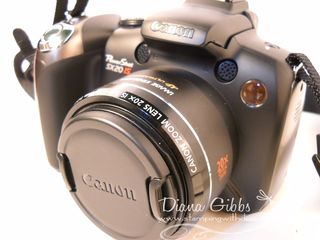 So most of you know that I had dropped…(egads) my camera about a year ago, and I had had it for years it was a small Nikon Coolpix, and it took pretty good pictures for the kind of camera it was.  Well then I replaced it with the same brand and style but it was upgraded to a new model, so I figured it would be as good and even better. Nope!  Well it drove me nuts, and oh my gosh I can't tell you how many times I wanted to smash it on the floor, if only the cards could talk, you would blush with what they told you.  So when I earned Founder's Circle I told myself ok I am going to spend part of the bonus I got, on a new camera.  The rest went to paying bills, gotta be sensible too.

I also had a few more great reward points to spend (these are points we get as a Demonstrator for our sales and we can redeem them for gift cards, catalog merchandise, clothing etc. – gotta love those perks). So anyway I turned in the points and got a gift card so that made my new camera even more of a deal.

After my distressing class this morning, my good friend Melissa (hey sweetie), we have been friends forever and when Stampin' Up! had their awesome re-join special she became one of my new downline. She is also a photographer and she said she would love to come with me to shop for a camera, as she knows the ins and outs and the what nots and all that.  So I had checked out Lynsay's camera when she was here and liked it, especially that it was an automatic, I don't want to have to adjust it and do focus and stuff, I also wanted one with good zooming cause you know me and my critter pictures, I also wanted one that took the picture quickly, nothing drives me battier then taking the picture and it takes it sweet old time to take and then the picture is over (Toby is a perfect example).  So I had an idea what I wanted.

We headed over to Costco and they had really expensive ones and then inexpensive ones and I wanted the inbetween ones so we headed over to Best Buy, they had tons.  We looked around and found the one that I had looked on line about, we compared it with a few others and it was the best deal, (it's a Canon PowerShot SX20 IS) so after asking all sorts of questions, and getting that perfect case for it, this one was too small, this was too big, this one had caca on it, we found the perfect one.  The poor sales man, he was such a good sport. He was like the Wyatt Earp of camera salesman.

Here we are, Perry and I with my new camera and my Stampin' Up! gift card.  Mel took the picture. Such fun!

Oh I totally forgot to post the bag, I mean it is the cutest little tote, and I forgot…cheese whizzz….thanks honey bunny Sankari (sending a big kiss and hug for you) for calling and asking about it and reminding me…it's a Swiss Miss bag, we couldn't remember the real name, this sounds cuter, and chocolatier…ha! Plus Sankari loves Hot Chocolate so it's perfect to call it that. 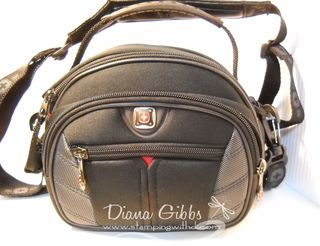 So I have played with it just a little bit, and hey Mel I turned off the digital zoom. A little tip she told me about.  I can hardly wait to play some more, and what I love about it is the manual is not this big thick thing, so that makes me think I might actually be able to work it pretty good.

So here's the first card picture I took, and it is a little tease.  This is my BFF Tracy's swap card from Linda's event.  I will show you the full card tomorrow. 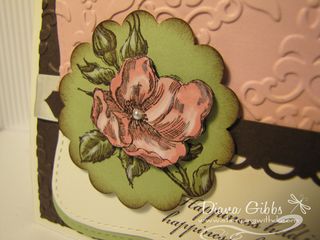 So that being said, I am gonna take my little manual and head to bed to read it.  I have my last distressing class in the morning, and then I need to finish up my make n take stuff for our September to Remember event.

Have an awesome Monday and thanks so much for stopping in!