My sister Jacqui (Jax) sent me this link the other day to make these delicious cinnamon rolls.  It uses a bread machine to mix the dough.  I had never done that before. In fact I had to dust off my bread machine cause I had not used it in quite some time.

Funny story how I got it.  Years ago when we lived in Mesa, so Eric was itty bitty. I worked for an accountant and we had a few clients that as Christmas rolled around they would give me a gift, some gave me chocolates, some gave me knick knacks, and a couple gave me cash.  So I had wanted a bread machine so bad, and I thought I would use the cash I got and get me the bread machine and put it under the tree from Santa.  The night before Christmas we were sitting at the supper table and I was like "I can hardly wait till tomorrow, I hope Santa brings me my bread machine." Now Jeff had no clue that I had got one.  So he is like shaking his head and saying "no, I don't think Santa is getting you a bread machine" and I was like "but that is what I asked for, of course he will", and Jeff is giving me the old eye roll and the quiet shake of the head so Eric doesn't see, and I am still like "oh I am so excited…blah! bread machine blah!blah! (got that funny talk from True Blood…ha!) So anyway.  Next morning we get up bright and early. Remember Eric was little then.  And lookee what I got!! A bread machine from Santa!!!  Ain't I bad?

So I wanted to try them cause I love a good cinnamon roll, and I have just been buying the Pillsbury Pop and Bake kind, and they are not bad. We always slather em up with butter while they are still hot.  Crap I'd probably eat a warm cow patty if you slathered it with butter…

I went to the grocery store and got all the ingredients I needed and the rest of the weeks groceries too. I could hardly wait to get home to try them out.  I was not sure how long the dough cycle was on the bread maker (it's 1 hour 30 minutes on mine).  I got all my ingredients ready and put them in the machine in the order of the recipe, which is very important. Then I set the dough to do it's thing, and I set my alarm on My Precious so I did not forget.

About 15 minutes before it was done I started getting my brown sugar and stuff ready and to grease the pans.  Well I got Jeff's Mum's pan greased. She actually won a blue ribbon for her cinnamon rolls and she made some when she came at Christmas, we ate them right up and then her pan was on the counter, and I told her I was gonna try to sneak it in my cupboard. And she said "would you like my pan?" and I can almost cry right now thinking of it (I know I'm sappy), and I said "I would love to have your pan", it even has her writing on the side "Gibbs" so when she would take baked goods to the church and stuff they would know it was hers.  I love that pan, and I am honored that I got to make cinnamon rolls in it today.

When the dough come out of the machine, oh my gosh I had to use my will power to NOT eat any.  I love the taste of dough with that tangy yeast taste.  But I am not sure of the whole egg thing cause they weren't cooked in there only mixed around, and that is all my guts need is more stuff in there expanding. 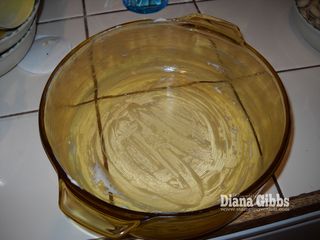 I made such a mess of the kitchen and dirtied so many dishes, in fact I got this dish all greased up and thought the shape was wrong so then I used a different one.

Look at that messy counter.  We have a tile counter so I have to lay down my old plastic pie crust mat thing.  Plus I probably should have thrown away those end pieces (you can see them in the pan). Ha! 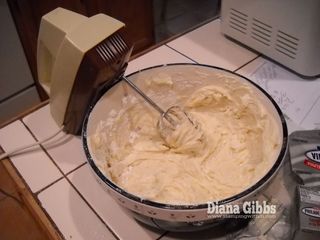 Ok so my math sucks in the kitchen as much as in stamping.  I found an icing recipe and my sister found one so I kinda combined the two, but I thought it was not going to be enough so I doubled the recipe.  Well holy moly, I had icing coming out my ears.  I had to use my old mixer, we got this bad boy when we got married (almost 26 years ago), it's down to one beater as the other one won't stay in and flies all over the kitchen. In fact, (hear the sound of the trumpet in the background) my beater kicked the beater bucket today making the icing.  It slowed down really slow, and got kinda stinky as the motor grinded to a halt, so I do believe "I get to go shopping for a new one!!!" 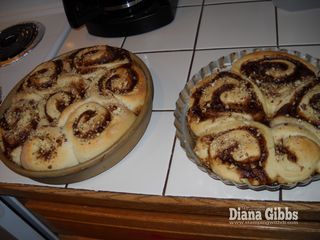 So here they rolls are out of the oven, they look good eh? 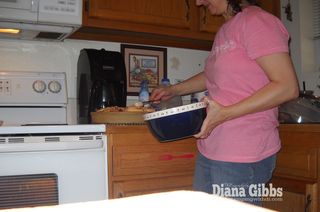 Here's me and my two chins putting the icing on the rolls. I set the camera on the counter and set the timer.  Notice the grip I have on the bowl. I made 50 pounds of freaking icing, and I about broke my hand holding it. 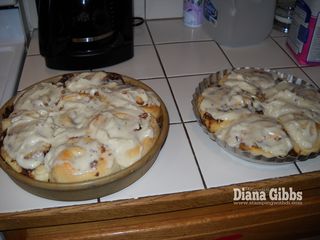 Here they are all icing'ed up. 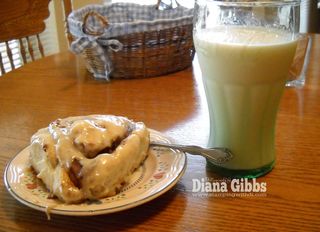 So were they Blue Ribbon worthy?  I want to make them again, and do the butter the right way, and I am wondering if I can use a different kind of cinnamon.  I am just picky….but Jeff and Eric devoured the one dish, and Jeff said "those were the best he has ever eaten, make them that way all the time, they were perfect!" So I guess they were Jeff & Eric Gibbs worthy.

If you try them let me know. Oh and here is the icing I did. This is the sizes for the regular icing, not the double batch I did.

Well I am setting up my room for class tomorrow, so I'm gonna git.

Previous Post: « Driving in the Countryside in my Pick-Up
Next Post: New Clearance Rack Items – Don’t Miss Out! »