OMG! I knew it was coming but I was thinking maybe right before convention and I just looked and I hit the One Million hits mark today.  Wow!!! That's a lot I think! Thank YOU so much for coming to see me each day, I really appreciate it. Mwah!!!Mwah!!!

I'll have to do some special blog candy…AFTER convention, my plate is too full right now!

I do want to show you Jeff's little project he has been working on for the last couple weekends. I took these with my Precious so hopefully they are not too huge. 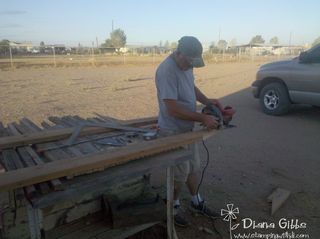 This is the beginning, I gave Jeff a couple pictures of what I had in mind and he ran with it. He's like one of those artists that can see things without a plan. He just got to work.

Jeff reminds me of Poppa in this picture, he was a jack of all trades, and that is what Jeff is like, it is much cheaper and usually better if you do things on your own. Ha! My Mum used to say "if you want something done right, you got to do it yourself." Oh and Granny used to say "if you're singing for me, you can shut up anytime!" Ha! I peed a little remembering that one. 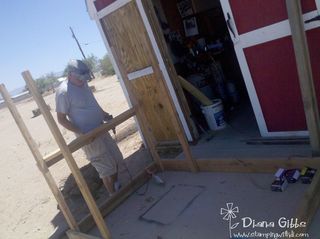 Is it level? Can you figure it out yet? Don't be scrolling, I know you want to scroll down, but that would be like turning to the last page of the book wouldn't it?  Just go slow, it's worth it. 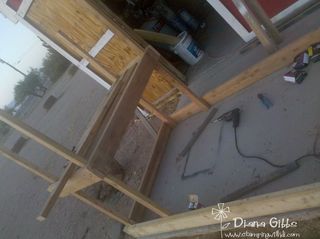 Here it is starting to take shape.  Did I mention the temperature was in the 100's and he was out there building this? Gotta love the man! 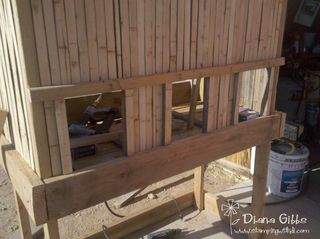 Here's the front. Hey I know, it's a miniature western town for gnomes and those are the store fronts, there's the barber shop, the saloon, and the sheriff station.  I think I see Miss Kitty starting to get ready to sing. Gosh I hope she sings on tune, I can just hear Granny now.

Here's the back side. Hmmm…are those little outhouses?

You know what would be funny? If I just stopped posting the pictures right now. Make you come back tomorrow…ha! Ok well maybe I am the only one laughing…continue on… 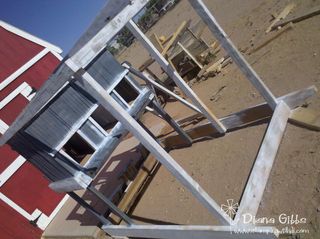 So this is after being primed.  Jeff's brother Tim had given us some wood ages ago, and the little wood slats around the saloon hall were actually from some sort of angley roof thing Jeff had for ages, and Eric had tore it all up. 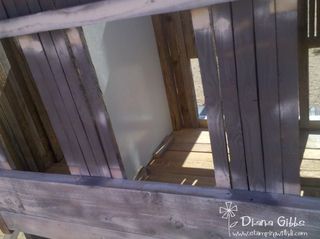 Here's the little apartments, can't you almost see a miniature wide screen hanging right there on the wall, and a nice ottoman and couch, I mean the gnome can't not have company over right? 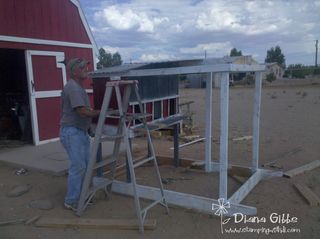 Here's Jeff putting the roof on, gotta keep the gnomes dry, I hear they get colds easy. The roof stuff was something else we had from ages ago. The only thing we had to buy was the screws and the paint. 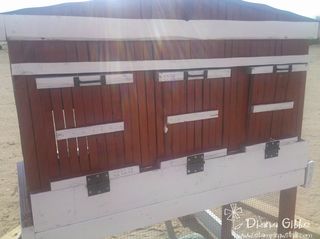 Here's the back side all painted. You can see the handles and hinges.  Jeff has added little turn things to keep the doors shut, so the gnomes don't escape at night. I hear they like to travel a lot and help people save money.

Well here it is all done, and pretty much in place, we (as in Jeff) still have to build up the dirt and clean the area, and get straw or hay or something for inside.  I won't be actually getting the gnomes till after convention.  If you look close you can see the little walk way ramp Jeff made for them so they can go up into their apartments.  It's a cheap rent place and there is no elevator.

Well let me know what you think.  Jeff says it probably cost him $50.00 in out of pocket expense since he used stuff from around.  The gnomes are gonna cost about that.

You do know what it is right?

Well have an awesome Tuesday and thanks for stopping in!