Well today was my first full day home after a whirlwind adventure at convention.  I still feel like a zombie, I still have to go back and add recipes to the cards on my last few days posts, I will get to it, just give me a bit to re-coop. Oh and speaking of "coop" we went to pick up "the girls" tonight.  Clara, Stella, Gertie and Alice.  I'll take pictures of them tomorrow, by the time we got home it was late and a wind storm was blowing, so I got them all situated in their roosting nest things, and we let them get settled.  We got 4 different kinds and I need to call Bobbi and find out again.  I know its Rhode Island Red, Black Sexlink, Barnevelder, and a Golden one, not sure of that name.

I have some fun pictures to show you from convention and the next little while I will show some every day.  I did not take tons so I am having some of my sweet friends that took pictures send them to me, or I am getting them off of Facebook.

This is little ol' me on the big stage.  I demoed at Regionals in Phoenix which was a smaller stage, and it lasted about 8 minutes, this was a big stage, and it was 20-25 minutes. I was nervous during rehearsals, and Paula yelled out "just breathe" and then I took a breath and slowed down and used my cue cards more and that helped. The more I did it the better I felt, and it was actually easier with the audience there.  I had to do it 6 times including rehearsal. 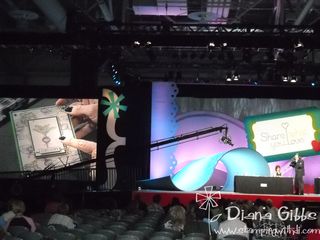 This is the card I was demoing. Here I was showing the poppin' pastels technique using the one sheet wonder method.

So I kinda hinted as to a special bag I received when I sent to the awards booth.  I was hoping I would get it, but you just never know.  I had the best year of my Stampin' Up! career I had earning cruise with sales alone and earning Founders Circle on my goal sheet.

When I signed in online it said I had earned an award and to make sure to pick it up.  I knew I had earned a reward for sales, recruiting, and also the cruise.

So Shiloh, she was my special friend from Stampin' Up! she called to ask me to demonstrate and she helped me most of the time I was at convention.  She is super sweet. So anyway, I was able to go into the memento mall early cause of recruiting, but also all us presenters could go in so we could get to rehearsals on time.  She went to pick up my convention tote while I was shopping.  Then when I was done, I grabbed my BFF Tracy and MAMMa, and we snagged Rhonda on the way too, we pulled her right out of the memento line, just in case I got that infamous "bag".  So I went to the awards booth and gave them my Demo number, and the girl said it would take a minute to get it together.  So this other girl went back and got stuff, and came back with a Stampin' Up! plastic bag and then the girl read off what I was getting, this stamp set for this, that stamp set for that, a pin for this and that, and then she handed me the plastic bag, and I thought ok, maybe I'll get it next year.  Then the girl said "oh yeah and this bag too" or something like that at that moment, I think my ears and brain turned off.

So they pulled the Founders Circle bag out from under the counter.  We all started screaming.  I could not believe it. My SAM Max rushed over and gave me a big hug, she knew it was going to happen.

I started to cry and I got hugs from everyone, here is Tracy and I (big bawl babies), and MAMMa smiling in the background. Rhonda took these pictures or I would not have any. Thanks Rhonda, I love you! 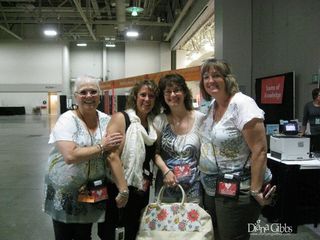 Here we are after, showing off the tote.  Shiloh took this picture. Seems she knew I was going to get the Founders bag, what a stinker…ha!

So what Founders Circle means is (a bunch of you asked), that means you are one of the Top 100 Demonstrators in the United States.  If you are from Canada, it is top 15 I believe. So they get the number based on, Sales, Recruiting, and Leadership. If you earn Founders Circle, Stampin' Up! takes us all expense paid to the Courtyard by Marriott in St. George Utah for 5 days in September. I am still trying to wrap my brain around it, cause I have seen pictures of the girls on this trip, and it is lots of pampering and gifts, and chocolates, and pajamas…I think the one thing I am looking forward to is the rubber playground, how silly I know, but it is a playground with the Stampin' Up! rubber there for the kids to play in. I just remember always seeing the girls when they show the video putting their feet in it, and I was always saying to myself. Someday I am going to put my feet in that rubber.

So here I am up on stage with Shelli the night of awards (you can't see my Eclipse shoes, but I was wearing them!), cause now that the nervousness of "did I get the bag" is gone, now the nerves kick in to "what number am I". I was like, I didn't care what number cause I made it, that was the main thing.  So I said maybe number 99, I had never earned it before, then that night, they got through the 90's, then the 80's, then the 70's, the 60's, and then I thought oh they forgot me, then they got through the 50's and I definitely was waiting for someone to take me aside and say oopsie we made a booboo, then they got to number 40, and said from San Tan Valley, Diana Gibbs. 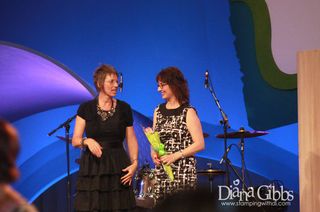 Here are a couple of the fun girls that helped me hit my cues and be on time. 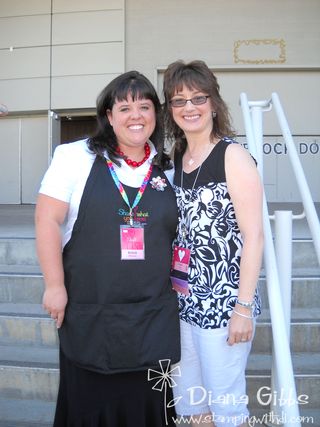 Shiloh and I. Isn't she cute? 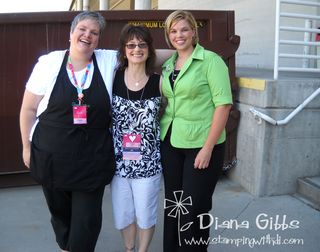 Paula, me and Holly. Paula was there to make sure we got to makeup and got miked, she is so sweet. We waited in the green room, and then before we went on we had to wait in the bullpen.  There were tv's in there so we could see the girls on stage.  Oh and wait till I share the candy pictures with you. Paula is the one that made them, it is amazing. Holly was the MC, and she is super cute too.

But I must admit, meeting so many people was a highlight too. I am so glad people came up and said hi, cause that is what makes being a Demonstrator so much fun, we are all one big family.

Tracy (look how long and curly her hair is!!) and I got to hang out with another pair of BFF's, Becky Roberts and Kim Sinclair.  We set the camera on the TV to take the picture.  We did not get near enough time to hang out with these two, but definitely we will at Leadership, and most definitely on the Alaska cruise.  Kim was actually one of the lucky 10 that had their name picked to go on the Alaska cruise.  Kim was in such shock and so emotional, I can hardly wait to hang out with her, and her hubby.  Our BFF"s won't be there, so we will be BFF-less.

I can't wait to share more pictures with you, like I said people are emailing them to me.  I actually got to meet Jan Tink for the first time at Linda's Evening to Remember event, and she is so nice and cute.  I met lots of other neat people too, and this old brain is racking trying to remember names, to name a few, Amy, Rose Ellen, Martha, Stella, Debbie, my BFF in training Sally, Kim and her sister Dana, Catherine, Joan, Jenn (who even brought me Ketchup chips and real smarties!!)so many more, I didn't want to start naming names and then have someone offended I did not say their name, but believe me, it will come to me. Thanks to all the emails and comments too, I would love to email back everyone, but there are like about 400 of them…yowza! Just know it makes me so tickled you would take the time to email and comment. Big hugs to everyone!!!

Well this old girl is headed to bed, still trying to catch up on my 40 winks.

Have an awesome Tuesday and thank you so much for stopping in!