Or I should say gone is almost 4 hours of my life that I won't get back.  On the weekend I watched Gone With the Wind, I had never seen it, except for bits and pieces as they show it on award shows, or the butter commercial, or the infamous Carol Burnett episode.

I apologize if this is anyone's favorite movie, but I sat there at the beginning what seemed like 5 minutes listening to music while the word Overture was on the screen, I thought I got a bad DVD or something and kept waiting for something to happen, and I finally had to hit the next button, then all the freakin' names of who played the roles and all the stuff that we see at the end of movies now a days, you know the stuff you walk out of the theater on, that was at the beginning.  So finally the movie started, and it went on and on.  Then it said Intermission so I had to take that DVD out and put in the next one, this is when I took a power nap so I could get through the rest.  So then I watched the rest of the movie, and had to wait almost clear to the end before Rhett said those famous words "Frankly my dear, I don't give a damn", and I wanted to jump up and cheer "Neither Do I".  I mean I did not laugh, I did not cry, I mean when she says to Ashley that he should have told her he loved his wife or something, I was like didn't he tell you over and over?  My ratings for this movie…toss it in the back of a pick up.

Oh where does that rating come from?  Let me tell you a little story, and it won't take 4 hours to tell either, I had bought this stupid movie, and I won't even tell you the name of it, and I tried to give it to a neighbor to watch and KEEP, cause I didn't want it back, and he was like "I don't want to watch that", so I had it in my truck.  So when my BFF Tracy was here it was still in there, and when we stopped to get donuts, we tossed it in the back of someone's pickup bed, we figured maybe they would want to watch it.  So now, when we rate movies, if they suck they are rated "toss it in the back of a pick up". 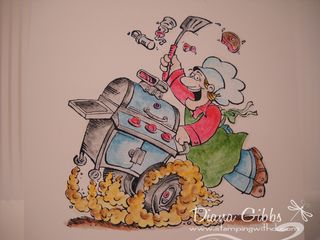 I have a swap that is coming up but I am waiting on some DSP, so I was playing around with coloring, this is using the Watercolor Wonder Crayons, and a blender pen, I stamped with Stazon Jetblack on Whisper White paper, I pulled out all my colors that are retiring so I would not use them.

Here is where I ended up putting my Little House. 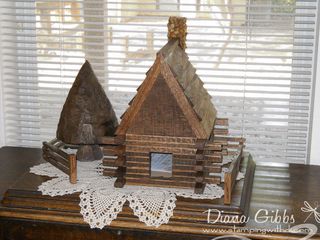 It's on top of my Great Granny's Singer treddle sewing machine.  That is a doily that Granny made me, beautiful eh?

I asked Eric today if he had any hangers and he said no, he went in my closet and brought out 4, and was like "these were in YOUR closet", and I am thinking where the heck are all the hangers.  I know Eric hides them, so Jeff usually is the one that finds them each time, and Eric hides them better each time.  So when Jeff got home I was like "I need hangers and you got to find them", so he goes in Eric's room, looks around then he opens up Eric's old toy box, and inside a garbage bag he found this…

…got hangers?  My gosh, we don't know why he does it, and I am sure it is part of his learning disability, and he only hides the plastic ones, when Jeff pulled the bag out, Eric started to laugh, then he changed his mind, and got all mad.  Gotta love him.  I wonder where he will hide them next time.

So American Idol, it's getting whittled down eh?

I was so glad to see Adam and he gave the Idols such great help too.  I loved that they did Elvis songs even though I did not know all of them.  Here is my weekly critique…

Crystal: I never heard that song before but she really rocked it out, and it looks like she is growing out her dreads.

Andrew: Ugh, this was horrible, the only thing I liked was that old microphone he used, and I am not sure why he stuck his finger up his nose before the commercial, maybe I am showing my age and it is code for something, but when we do that in my house, I say "go get a kleenex".

Tim:  Wow another good week, this is definitely the kind of music he needs to do mellow stuff, I think I would love to hear him sing a Herman's Hermits song, like Henry the Eight.  What was up with Ryan dancing with a guy while he was singing, I think next year IF there is an Idol, they need a new host too, Ryan is really getting on my nerves this year.

Lee: I love this guy more each week, I swear he is definitely gonna be in the bottom 3 with Crystal, but not sure the third person after tonight.  Kara who blabs and blabs likes to hear herself talk.

Aaron: I liked the song better near the end when he slowed it down.  Jeff thought he looked like he was not feeling well tonight.

Siobhan: This was horrible and was all over the place.  I understand what she was saying at the end about being labeled and wanting to sing many different styles, but I think not in one song.

Mike: Sorry, I didn't like this, and I hope they don't regret saving him next week.  I wish he had of just sang the song the regular way, who cares what the judges say about making it your own, sometimes you just got to do the song right.

Katie: Had fun and some spunk tonight, I wish she would have left her hair down and swung it around, it was too neat and tidy for the attitude of the song.

Casey: I did not know this song and it was not my favorite Casey song.

So tonight I voted for Crystal and Lee.

Well I gotta hit the hay, I hope you have a great Wednesday and thanks for stopping in!