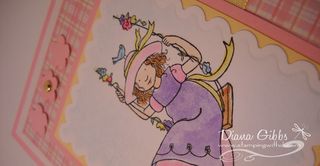 This was my second sweet spot of the day, coming home from my tax appointment…it was ugly news, so it was nice to open up the mail and find this cute Easter card.  It uses non Stampin' Up! items, but it was a RAK from my sweet friend Ellie so it is ok. My first sweet spot was seeing my great friend Teri when I went to get my taxes done, it has been a while since I had seen her so it was great catching up about our kids.  Even though my accountant (my old boss actually) gave me blechy news, it was great seeing him too. He said don't get mad at the messenger…and I guess I can't.

Then we went to supper at The Deli with MAMMa and Vinni, and that was so much fun, I love these two people so much, and Jeff and I were saying on the way home, how much we enjoy hanging out with them and even though we come from different parts of the country originally (they are from New York, Jeff is Illinois and I am Canada) and our ages are a bit different, we have so much in common.

Then guess who we ran into while we were there? Ellie and her hubby Ed, and her cousin/sister Karen, so it was great to see them!  Ellie and Ed are the best, and we love hanging out with them too.  So it was like God was saying gee Diana, you got crappy tax news, but look at the great friends you have…and you know what? I needed that!  Cause God is right, friends are much more important, and it is only money, and you can't take it with you.

So here is the card in full.  Thanks Ellie for the beautiful card, I am glad you got them done before Karen got to town, now you can enjoy her company, believe me it will go too fast.

So since we went to supper, we missed the first 4 singers on American Idol, Eric even called and said "you know what you are missing?", and we said yeah.

So my BFF Tracy said not to worry about Siobhan or Mike.  She said Casey was awesome and I did Youtube him and wow, what a star.  We missed Didi, but came in when Ryan was harassing her about telling why she sang the song, then Toby barked and I don't know if it ever came out.

Then we heard Tim…they call him Teflon Tim, which is that like calling a big guy Tiny? Meaning, we keep trying to get rid of him, but he sticks? I don't know, but I saw the mean coach lady from Glee in the audience and I hope she kidnaps him for their show…News at Eleven…Teflon Tim is missing, the Gibbs' household celebrates with a party.

Then I think it was Andrew, I was scribbling on a piece of paper, and I think he did great and was more like his signature Straight Up song, unfortunately all I can remember is how they pulled his poor Mum on stage and had her talking into Ryan's mike on his lapel.

Then Katie…well she has a great voice, but yeah she needs to sing younger stuff, and I totally could see her do Country, not Pop R&B like dork Kara says to her.

Then was it Lee? I was so afraid we missed him.  Tracy is 3 hours ahead so she was texting me and said he was good so I was forgetting the whole show was over for her and thinking he was on the beginning. He was so good, and my gosh is he not coming out of his shell, he looked at each side of the stage, and that raspy voice melted my heart…

Was it then Crystal? Liked how she started at the piano and then stood up, but I did feel she was uncomfortable at the piano.  I totally agree with Simon she needs to stay true to herself and not change.  I mean we love her for her, if she wins and then changes herself, I wont like her as much.

Then it was Aaron, how many is that? He sounded off key in places, and feel that he was not powerful enough to end the show but we love him.

Oh and to those Twilight Freaks out there, did you see this?

Well I think that is all my blabbering for tonight, I have to hit the sack.

Have a great Wednesday and thanks for stopping in!