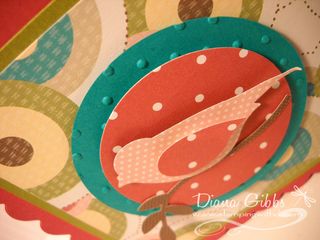 So it rained…I think quite a bit at first.  I was inside all nice and dry with my Technique Class, but when Eric came in to pull the door prize tickets, he was pretty soaked.  But it did clear up eventually.  Someone had brought tent thingies, so at least people could get out of the rain. 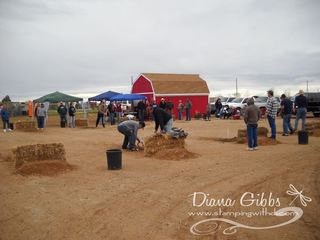 There were quite a few more people this time, since we made up an "official" flyer…ha! Debbie and Steve even came back so that she could come to one more class, and so that he could play in the game, since he missed the other one.  They live up by my BFF Tracy in Pennsylvania, and it was so nice to see them again before they head back home. It was Debbie's birthday too! I hope it was a good one honey!

So wanna see who won those awesome trophy's that Jeff and Jim made?

Well it's Darryl and his other brother Darryl.  Actually it's my sweetie Jeff and his little brother Tim. What are the odds that they even got to play together.  Every one draws a number and you get matched up this way, so it was pretty ironic that they were even partners.  But anyway, they each got the trophy, and were pretty proud of themselves.  They should be cause there are some great players that show up.  Oh and yeah in case you can't read Jeff's t-shirt…he got it from Tracy it says:

This is not a Beer Gut, it's a protective covering for my rock hard abs.   Yup! Nuff said.

So today at class, I got to meet another Canadian Demonstrator.  Ruth Earle and her hubby are here in Arizona for a while and she was able to take a class. 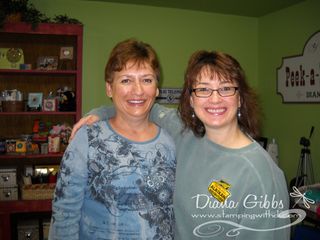 Isn't she cute? And she even brought me Smarties and some Canadian gum, she said next time "Ketchup Chips"…gotta love her eh?  I love meeting other Demonstrators, and if they are Canadian that is all the better, cause then I feel a little bit closer to home.

In fact, check this out…

This was pretty interesting.  I need to look up that one thing he said.  Does California have more people living in it then the whole Country of Canada?  Can that be right?

Well one of the reasons I love America, is my MAMMa, and look what she made me (and all the other peeps that went to her house before Leadership). 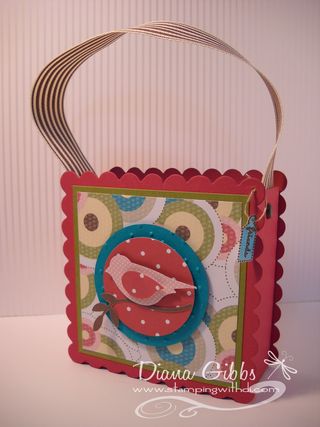 Isn't that cool? I might have to make one in an upcoming class. I updated my classes last night.

Well I better get off here, I have my last Technique Class in the morning, then I gotta put some new batteries in my camera so I can tape my tute…ha!

Have a blessed Sunday, and thanks so much for stopping in.

If you would like to place a Stampin' Up! order, my online store is open 24/7 ~ Thank You So Much!