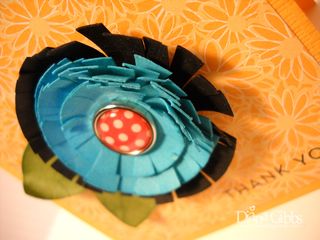 This I think is the first time for me…well the first so quick.

I got my Stampin' Success today, (the magazine each Demonstrator receives every month from Stampin' Up!) and I always look at it right away.  It's filled with so much information, stamping ideas, workshop tips, getting to know what other Demonstrators are doing, and also so we get to know others better.  I will admit I don't read it cover to cover right away anymore, but I do look at it page by page and read about what, or who, I am interested in right away.  One thing that caught my eye was the different fun flowers.  I had to copy this one right away.  I did not have the So Saffron DSP, so I switched it out with Summer Sun from the Pink Flamingo DSP pack, and I also added an Epoxy brad instead of a button, I love those little guys.

This was such a quick little card and I love the colors, it is hard to tell but that is Basic Black as the last flower, but it looks like really dark blue next to the Tempting Turquoise, I think. This is a 3×3 card.

Ink: Tempting Turquoise to sponge on the edges of the flower

Just punch out the cardstock with the circle punches, snip with your scissors along the edges, curl with your bone folder, glue them together, put a brad through the center, or a button whatever you choose.

So I promised Jeff 2 days ago I would show you the Horseshoe Tournament Trophies that Jim and him made for the upcoming tournament.  Yeah you are saying is it a year already? Well no, after they called last month's tournament "annual", they were wishing they hadn't so this is just a tournament.  So anyway, look at the neat trophies they made. They did two so the team of two will each get one. 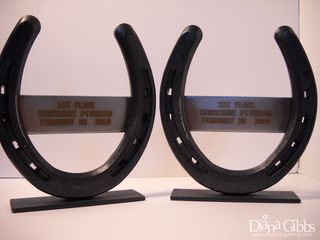 I also have the stew recipe to share with you, but I will do that tomorrow. I will be at Rhonda's tomorrow working on Spring Fling so I might need some blog post "filler" and there's nothing like a great recipe to "fill" you up.

I did want to answer a few of you that emailed and asked me "what jeans?" seems my BFF talked about my jeans in her comment about the potatoes, and inquiring minds want to know.  Ha!  Well she is the only one who knew this, other then Jeff and Eric.  So yesterday when I was taking the clothes out of the dryer, I saw a pair of Eric's jeans that used to be Jeff's till he outgrew them, then Eric wore them, till he un-shrank them so he has other ones, so he still from time to time wears the baggy ones, and I thought hmmm…wonder if they would fit me.  So I tried them on, and they were a little baggy, especially around the crotch area, but they fit higher on the waist then my jeans, so I left them on…they even came with a worn in copenhegan chew ring in the back pocket…how nice eh?  So anyway I wore them to Walmart, I mean they are just Levi's, jeans are jeans right?  I wore a coat so I am sure no one could see the faint "ring" on the pocket, and really have you shopped at Walmart lately? I didn't look half bad…as I was cursing away in the parking lot wearing my men's jeans with the chew ring on my butt pocket, yelling "my taters are stuck! my taters are stuck!" So there ya be. Thanks Tracy!! Love ya for making me keepin' it real!

So did you watch the Olympics today/tonight?  OMG! and that poor Luger from Georgia, he was only 21. I still cry thinking about it, that is how old Eric is. What a sad way to start such a great sporting event.  Let's hope that this is the only bad thing that happens, and lets hope they cover those steel posts with something. That seems a little scary. My heart goes out to his family, friends, team mates, and his Country. To die doing what we love, maybe that is the only way to see any sense out of it.

Once they started the show of the Nations and then the lights and stuff, wasn't that amazing?  It looked like it was water with fish, and the fiddles, oh I love fiddle players, and I must get me some of them sparkler boots, that was cool. The way the things came up that were totem poles then they turned into something else, it was so cool.

What else? I was taking notes and trying not to miss anything…

Bob Costas, does he ever age? He is like the George Hamilton of sports commentating…minus the tan. It wouldn't be the Olympics without him.

Opera singer, she had a beautiful voice, but I couldn't understand a thing she sang, they should have had Anne Murray sing it.

Oh I cried when they had Terry Fox's Mum carrying the flag in fact I am crying now just thinking about it.  I think Terry Fox holds a special piece in every Canadian's heart, I remember watching him run to help raise money for cancer, and he had lost a leg to cancer, and then he got sick while he was running and never finished and he died, and it was so sad, I remember we prayed so hard for him.

It was nice to see Wayne Gretzky, Bobby Orr, and Steve Nash as well.  I'm not a sports person, but I know these guys!

The snow, didn't that look so real blowing around and it made it feel like it would be cold in there.

Halleluja – the Shrek song – I love that song.

The Canadian Poem – again I was crying.  I love that I live in America, and thankful that I do, but I will admit I very much miss my Canadian family and friends, and my home country Canada.  I know that Canada and the US are so much alike, but there is something about Canada, and the people and they seem gentler maybe. I don't know. I've lived here too long, and have probably lost it…the gentle part. Must be that time of the month, I am an old cry baby sap. Give me some chocolate dang it!

Well I better hit the hay, it is almost midnight here, and I gotta get up early in the morning.

Have a great Saturday, and thanks for stopping in!