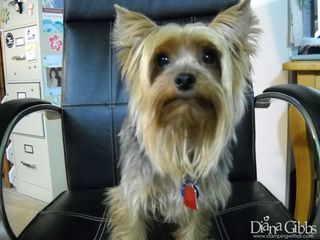 OK, go get some coffee, or a diet coke, whatever you drink to wake you up in the morning, this might be a long one. Me and Toby will wait.

First off…thank you to Heather she explained that if you click on the picture and it gets too big to see on the computer as it gets cut off, then use your arrow keys and it will move up and down. I tried and it and totally worked!  Amazing…thank you Heather!

Let's get right to American Idol before we forget:

The glasses that the judges were drinking out of used to be Coke glasses, now they actually look like beer with foam on the top.  I bet Paula is wishing she had of stuck around now. No more hiding the booze!

I am glad to see Ellen finally on there, she is funny.  In fact at one time I saw her sneak a peek at Simon's test sheet and then mark hers too.  Perhaps they need the Jeopordy little go betweens so there will be no more copying. I am wondering though why they felt the need to keep the four judge format, I think that once Paula left they had introduced Kara they could have left it with three, remember last year it was hard having four judges talk. Especially now if they are ALL gonna be liquored up, and Ellen telling jokes, this might be the longest season yet.

Here is my sober (I hate beer) opinion:

Mario – I love love love what he did to that Paula Abdul song, I had to actually sing it to Jeff cause he did not even know the song that it was…brilliant…kudos!

Vanessa – the young country bumpkin, I feel bad that she didn't make it, but she is so young, and I just think all those Hollywood people would have ate her up.  I do hope that it did not cost her money to get there, and that she got money for going.

28 year old rocker, can't remember her name, she is a good singer, I would love to see her wear something different, she is pretty, and now don't be saying, its about their voices, cause I know it is, but now they have made it this far, they also need to remember it is also a persona too, and I hate her to get stuck in the rocker rut, especially at her age…gee am I digging myself deeper?

The new Daddy guy with his wife in labor, he kicked butt, and I think his name was Michael, I was trying to write down names, but My Precious was talking to me.

The Tim guy, I think he used a guitar, I have a feeling that they know he is good and are keeping him around to make him better, I think he has messed up a few times but they brought him forward, so I think they see potential. He sure is a cutie with that wispy hair.

Maddy, the young girl, oh that broke my heart she did not get picked, cause look at what I said about Tim, he was not perfect and he came forward, I think she picked the wrong song, but I would have liked to see her come further.  But as her Mum said as she left "you are only 16".  Yeah that is young, there will be other years.

Casey (keep your shirt on), bluesy guitar…I like his voice

Didi – of course I would love her, look at her name!!! Didi, it's what my girlfriend Sankari calls me…ha!  But let's be serious, she kicked butt, I loved her folksey sound and hope she goes far.  I hope they dont stick her with a bunch of losers in the group thing.

I think that was all of them.

Like I said My Precious was talking to me, she kept saying, tinkle! tinkle!.  She also thinks I should show a bit more of her, so here goes.

She is now bedecked in the latest of pink gerber daisy. If only she was scratch and sniff, I am sure she would smell heavenly.  When I took her for a test drive around the sales lobby there were many accessories I could get for her, one was multicolored covers to keep her warm and protect her from scratches. Would I pick the blue, the red, the pink, the purple, the gel, the body glove? Ohhh out of the corner of my eye I saw it, the perfect "wrap", the little black dress never goes out of style right? So that is what I got. Plus it is a holster so I can wear her if I want.

Here she sits on it, as when she goes to bed at night she has to slip off the back of her little black dress in order to fit on her pedestal.

Pedestal? Did I just say pedestal? Well yes, I did, nothing but the best for My Precious. But really I'll tell ya a secret the pedestal was for me.

Once My Precious perches on the pedestal she becomes more then a phone, she is now a clock, a weather thing, she plays my music, that oopsie gerber daisy I by accident put all my music from my computer on her. Any photos you have loaded will play like a slideshow, and best of all is she is an alarm clock.  So I keep the pedestal by my bed, cause she wakes me up in the morning, and I have it set to a rooster sound, it went off this morning, and Eric had never heard it before and he was laughing so hard out in the living room.

You want to see how brilliant she is? 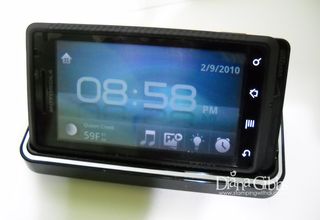 See how she looks dim in this photo compared to the other one?  Well if you touch that little light bulb she goes dim so she does not keep you up all night blinding you.  Plus the little lights on the side when I am reading they are off, but when I turn the lights off to go to sleep, they know it is dark and they light up so that if I need to use my phone I can see.  Yeah I know, brilliant. I am still in awe, and I don't know half the stuff she can do.

So someone is poking me in the butt, no it is not My Precious, cause right now she is on her pedestal, cause it is also a charger, seems she has also led me to a game called Jewel and well I wore her batteries down…ha! Toby is poking me, and he says "Mamma, but can you cuddle with My Precious, and does she cuddle you back?"

As he hangs his head in sadness. Doesn't that about break your heart?  I tell him of course not, I love him more then Precious.

So now he is so happy, and even happier to show you how long his hair is getting, we keep his body not super long but we want him to have a long face…well long hair I mean, although his expression looks like a long face doesn't it?  Ha! 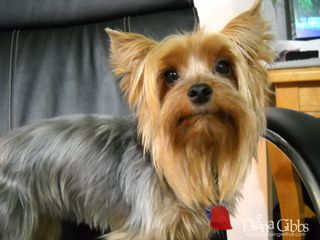 Well the three of us would like to say have a marvelous Wednesday and thanks for stopping in!