David Copperfield has nothing on my hubby!

I had to go to the grocery store today and as I was getting in my truck to come home Jeff called.  He was doing some yard work, trimming the lantanas around the trees, and he found something he thought I would like to take a picture of so I could blog it.  Aint he the sweetest?

Now he told me what it was, but I am gonna make you wait…I'm not as sweet as Jeff…ha!

So anyway I told him I would be home really quick.  So when I pulled in I saw Eric and him walking around and he was not holding anything…but a coors light.  I thought oh no it must have gotten away. So I parked and I said "where is it?" and he points to his beer, and I am thinking, man that is one tiny __________.  I went into the house and got my camera. So I came back outside and said "where is it?" and he said "here" and he showed me his sleeve.

Isn't that the most cutest thing you have ever seen in your life? Have you guessed what it is yet?

Maybe this will help…poof! It's magic… 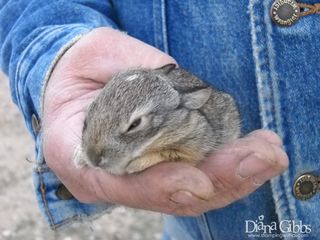 …it's a bunny!  Jeff said he picked him up and he crawled right up inside his coat and stayed there the whole time.  He was actually sleeping when Jeff brought him out, and he was toasty warm. It just makes me smile! 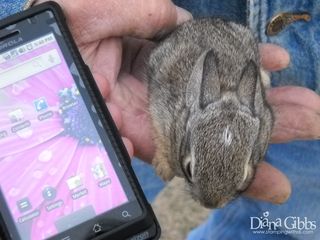 …she thinks he was cute too, and even took her own picture, which I quickly sent to my BFF Tracy.

So we let it go back on the ground down by it's hole and it hopped right inside.  Hopefully we will see more of him.  We put out veggies and it is fun to see them eating.

So in honor of Mr. or Miss Bunny, I thought I would make up a quick Easter card.  My friend Robin who loves that I mutilate the chocolate bunny wanted one with a chick, so this is my version on that. 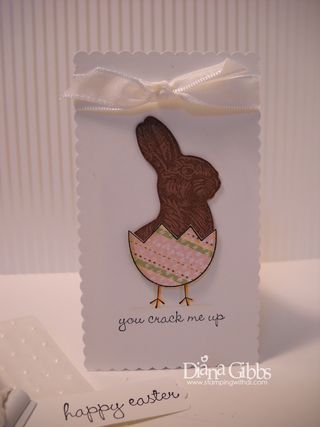 I ran the glassine envelope (these are in the Occasions Mini Catalog) through the Impressions Folder and it looks so cute. Then I stuck my little chocolate bunny/chick note inside and closed the envelope with a library clip that I tied some taffeta ribbon on. 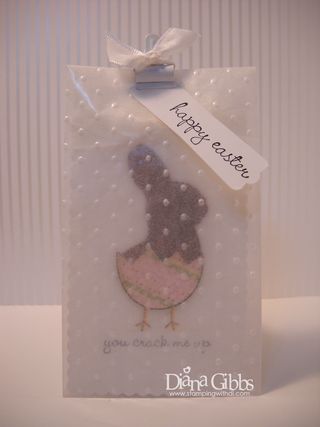 If you would like to place a Stampin' Up! order, please click here.  Thank you so much I really appreciate it.

Well let's talk American Idol.  Tonight had it's share of drama didn't it?  The only place I like drama is in a movie, I don't like it on reality TV, or in real life either.  But of course people are gonna be silly, I mean they are being filmed, it's their 15 minutes of fame.  In fact I think that is why they all congregate in one place to practice.  They complain cause they can't hear cause the next people are signing too loud and I am thinking can they not go elsewhere?  But no, the camera is in this room.

So this is my take on tonight:

The first three girls were gorgeous and they sounded really great, and they all went forward. The girl with the big colorful glasses at one point they were red, and then they were green. She reminds me of Sarah Jessica Parker's character in Square Pegs. In fact there is another girl that zips in and out and I don't remember even seeing her sing, she just talks now and then and she reminds me of my little sister Courtney.

It was interesting the two groups that sang the same song and they all got put through but that one girl with the blue in the front of her hair and it looked like a hat brim, I wondered if that was just cause of the song?  And that one girl that did not make it and she was crying and crying and her black makeup was smeared all over the side of her face. Bet she'll hate to look back at that.

I am so glad that Casey James went forward I really like him.  Mary the rocker, I don't care for her, was she the one that was on last season and they picked the tattoo girl instead?  Right now they are a jumble of confusion, I didn't recognize half the people tonight, I like it whittled down to fewer people.

That was cool with Big Mike and his baby being born and it was on video, so I hope that they taped the whole birth so he can watch, that was pretty special.  I am glad they brought him forward, but I was soooo mad that Seth did not make it and they brought Tim forward…ugh!

So I am wondering why that one group picked that one stupid song with all the wacky lyrics and they didn't know the words, what are they thinking? Why didn't they pick something they new?  Towards the end of the night the guys picked a really nice song and did an awesome job and I think if that other group had of done the same thing, the results might have been different.

While we were watching we were eating popcorn, and Tracy's daughter Jessica (my pretend daughter), said pop the popcorn and then sprinkle white sugar on it.  We added some popcorn salt too, and it was sooo good! Try it!