Yep, all that waiting and it has come and gone so quickly. My BFF Tracy, as I am typing this, has landed at the airport and is being whisked away by her cutie patootie hubby back home in the cold cold PA weather.  I miss her already, but we talk almost every day, and I will see her at Convention in July!

Speaking of my BFF, she made me a silver bracelet with the beads that said BFF on it, and it had a magnet closure and I lost it the last day of regionals, I know I had it on most of the day, so if anyone finds it, please let me know ok?  I bet I hugged someone and it came off.  I almost got sick when I was in the car, and looked down at my bare arm and it was gone, I am still going to scour over my luggage hoping it is there but I packed that stuff in the morning and I was wearing it later.

I wanted to share a bit with you about our time at Leadership if you want to sit for a spell.

After staying up late the night before at MAMMa's – (I talked to Denise today (waving HI!) and she was asking exactly who MAMMa is, and I thought I would let you know in case you have never heard this before. MAMMa stands for My Arizona Mum Marlene.  Although Marlene is not blood related she is heart related and I love her like my own Mum and she is one of the sweetest women in the world, my dream would be to have my real Mum in Canada, meet  MAMMa.  MAMMa did get to meet my mother in law at Christmas. )

So anyway, we stayed late and did not get many swaps done, but we knew we could finish them in our room, Tracy did an adorable valentine and I will have to take a picture, and I did my bunny butt hurts card. We went over and got registered, picked up our darling bags and all the goodies, we went to momento mall, we squeezed and hugged all the people we only see a few times a year, to name just a few: Sally and her BFF, Beverly, Denise, my old stalker Patricia, my new stalker Kim, Sylvia, what can I do to the bunny next Robin, I met and saw more people that my mind is forgetting names…I love seeing everyone!! We then went to eat and the salad was so good, and we even had a margarita that tasted like on the cruise ship.

Tracy had a focus group thing and while she was at that, I hung out with my fellow Artisan Award Winner Shelly Bohan and her friend Sherry, we were gonna meet up with our other AAW Shanna Jensen later as she was in make n takes.  Only three of us went to Leadership so we each brought a friend to dinner.  Unfortunately we walked out and went the wrong direction out of the hotel and did not find anywhere to eat so we ended back at the hotel cramped in a booth with blaring music.  Oh well it was still fun.  We ended up back in our room to chat and visit, and had some fun. 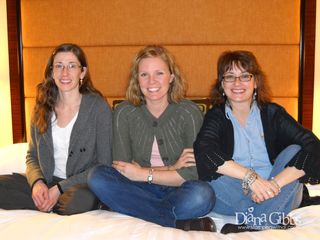 We have such a fun group, none of us here had ever won before, but some of the other girls that have said that we are the chattiest group so far, that part I love, and we do side swaps, and hope to be friends with them way past our Artisan Award year.

-hey what were YOU expecting?  Of course I had to do the speak no evil…I think it was just a way for them to get me to stop talking…ha! You can see Shanna and I had on our Artisan bracelets, too funny I had to have two links removed and a new closure thing put on mine cause the toggle didn't hold, and Shanna can hardly get hers off it is so secure, and hers she didn't have to make shorter, it was funny they were different like that. 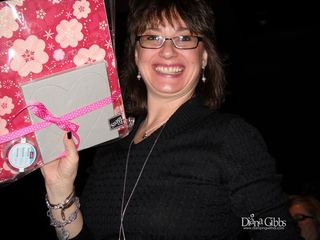 I even won the first door prize of Leadership the next morning, I had the right colored wrist band, so it is fun watching everyone scream when it is called, they used to throw out balls and that was a little nerve wracking, and I have not won a door prize in a long time so this was a great treat, and I was so tickled cause then I could take the heart chipboard off my wish list!!

We even all got a quilt square and another new stamp set, Kristin took a picture of Tracy and I so I asked her if I can put the picture on my blog, when I hear back I will let you know…she said yes, so here it is! 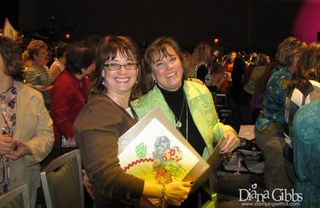 Now there is proof that Tracy was here…that little nudge was for my sister Jacqui…she was saying where are all the pictures of Tracy…and I told her, not on MY camera…ha!

That night was Managers Reception at Corona Ranch in Laveen, and here is Rhonda and I drinking our Root Beer.

Before we got into the arena they had munchies and drinks outside, tortillas, churros, cheese enchiladas, yummy stuff.   Here I am with Max (she is a demonstrator and also a SAM) and my buddy Terri Mongeon, we look a little different then here eh? 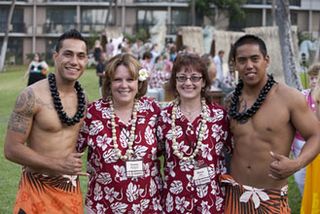 This is a picture of us from Hawaii, I was clicking around on the SU! Demonstrator website and looked at the Hawaii highlights and there we were! Fun times!

Back to the rodeo…We were not in the arena very long, we saw some bull riding, some rope twirling and a few other things, and then they started to do the Pass of Death ride or something, and right in front of where we were sitting the guy doing it as he was passing from one horse to the one with no saddle, his leg went in between the fence rail and he broke his leg pretty bad, so we sat there and tried to look around, a horse pranced around in the center to try to draw your attention away from what was happening on the ground. The band played on quietly, we were reminded of the Titanic movie where the band played as the ship was going down.  They called an ambulance and they then told us to go to dinner. (They told us later that someone gets hurt 1 out of 10 rides). Wow! They are sure brave cowboys.

Here we are getting ready to eat our dinner, I bet the cooks were freaking when they were told "the guests are arriving now – about half an hour early" Holy Guacamole!!!….hey it was a Mexican dinner, what did you expect me to say?

So we ate and headed back to the hotel, and laughed and tittered for a few more hours, morning comes fast!

The next day we took some awesome classes and learned so much, we had a great speaker and we had seen her years ago, and it was great to hear some old things and new things.  I always come back so energized from going to events.

We went out to eat with some fun girls that night, and tried to go to bed early cause Rhonda and I had to be up early to be at the convention center by 7:30.

Regionals was so much fun, cause a lot of our local girls that were not able to attend Leadership were able to come and also you could bring a guest until seating was filled, so a few girls even had their friends there too.  I think they said 74 guests were there.

I am so bad with pictures, but at least Theresa took a picture of Mari, Debbie and I. 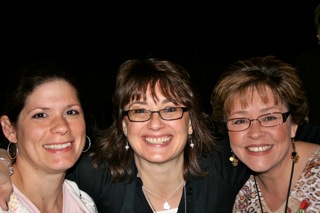 She has an awesome camera and she makes you feel like a star cause the camera flashes all the time.  Thanks for sending the pics Theresa!!

Well like I said Tracy went home today, and in fact she just texted me that she is home, and I am headed to bed, it will take me a couple days to feel all rested up.

Have a great Monday and thanks so much for stopping in!