...a few of you guessed it had something to do with Twilight, cause you recognized Edward's face.  My sister Jax guessed right that it was a calendar.  Here it is in full glory. I love it...Thank YOU!!! Julie!!! 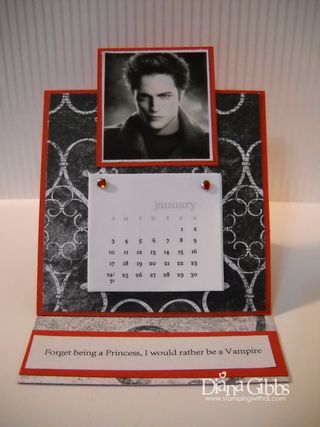 See what it says? "Forget being a Princess, I would rather be a Vampire", and I totally some days wish I was. 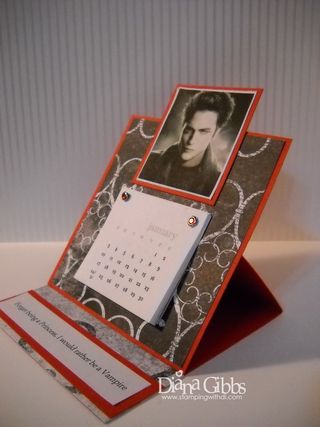 Here it is from the side, cause it is an easel card. Neat eh?  I might have to make me some.

What is so cool and freaky and all that is that Showtime has started showing Twilight this month so I have it on right now as I type this.  I pretty much can talk most of the movie, and Jeff just rolls his eyes when I do it.  In fact right now Edward is playing Bella's song, and I could listen to that over and over, and just close my eyes, it is so beautiful.

But I think this has to be one of my favorite parts of the movie...it just makes me feel so young and remember back to that young love glow, you're in high school your boyfriend walks you to your locker or class, and you get a little kiss before you go in...ahhhhh!!! I wish I had of known Jeff in high school but I always tell him, he probably would not have liked me.  He was a jock, and I was a nerdy freak. The freak stuck, but I outgrew most of my nerdy stuff...right?

What is your favorite part of the movie?

Well I gotta get cleaned up from my class today, put all that stuff away, now I got to get designing my technique class for February, I pretty much know what I want to do technique wise, I just gotta figure out the projects.  Plus we have a big Spring Fling event coming up March 13, gotta finalize all them projects too.  If you live in Arizona, you don't want to miss it.  Make sure to sign up for my email newsletters (off to the left side you can see where to do that).  I will be sending out the invite in the next day or so.

Have a great Tuesday, and thank you so much for stopping in!

OK, don't hate me but... I don't know about you, but I am getting a little tired of seeing Bradley Cooper in every other movie that is coming out. I was watching American Idol the other night and a preview for the movie Valentine's Day came on and not only is Taylor Swift in the movie...ugh, and Jessica Alba, something about her I just don't like, but Bradley Cooper is in it too.  I mean, my gosh what does this guy do, read scripts while he whitens his teeth, cause don't you think his mouth is too big for his face?  Anyway, I just had to throw that out there.  Talk amongst yourselves...ha!

So today was fun and I got to meet Debbie and her hubby Steve, and their two dogs, they came all the way from PA, and she is a customer of my BFF Tracy's but they are here for a month or so, and she came to class, so what a blast and the guys gabbed together too.  Debbie was teasing saying that her hubby found a new best friend. I said he would have to share him with Jim and Tracy's Steve. 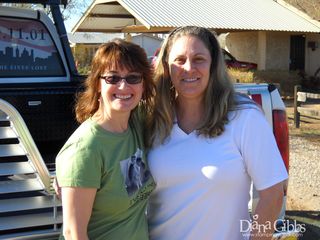 Here is Debbie and I, and she is such a super lady, we had a great visit. They have the New York-ish accent, and it was funny we were talking about turtles, and that you have to be careful when they are babies cause the hawks carry them away and Debbie says "what?" and I said "a hawk", and she was like "a howrk, like the bird?" (I am trying to spell it like she said it, and I totally can't - I mean I am sitting at my computer right now trying to say it and figure out where the letter should go to  make the right sound...I give up!!), and I said yeah, and she was laughing at how I said, it, and I said "well it is spelled HAWK, and not HOWRK", we had to all laugh at that.  It makes no sense at all spelled out, but if you know anyone with a New York or New Jersey accent you know what I mean. It was a fun time. 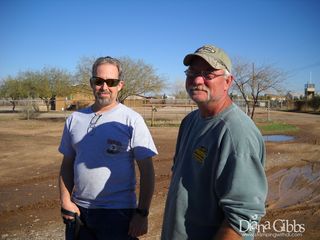 Here are the men, they chatted it up and even played some horse shoes, they might come back on their way back home and set the trailer up, and play in the next tournament.  Too funny, Jeff is wishing they did not say Annual Tombstone Horseshoe Tournament, cause they want to do it again. So they are trying to come up with other names...ha!

So last night I played with my Simply Adorned jewelry and these are what I did.  I have more charms on the way, and they should have been here Friday but with the rain, UPS said they would not deliver till Monday...so either they were smart and did not attempt to make deliveries or they were stuck somewhere. 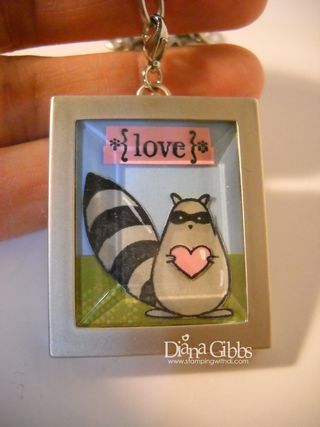 Here is the front of the necklace, see how it is beveled? I had my Love Bandit stamp set out and with Valentines Day around the corner I thought it would be fun, then I did a different one for the back. 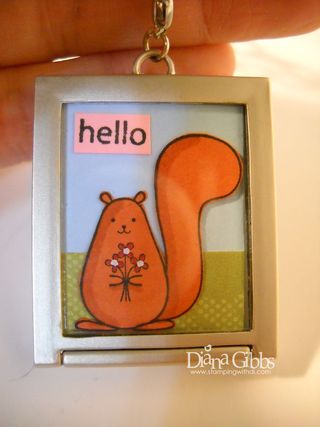 Here is that cute squirrel from the same set. So fun!

Then I did some of the little charms that go on the bracelet, these make you think cause they are so tiny, I used my Tiny Tag, and Teeny Tiny Wishes set to decorate these little gems. 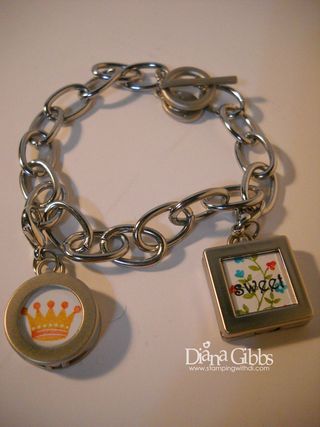 Here is one side.  I think I want to put a "D" over the crown but I have not found the "D" I want to use yet. Then I added sweet over top of the flowers. Here is the other side, my love with the heart, and then I added fancy (this is from the Love Bandit set) over top of some other flowers.

So Julie (hey girlfriend!!!) came to class today and brought me the coolest thing, wanna see a sneak peek? Cause I will show you tomorrow, a hint is...I jumped up and down and might have screamed when she gave it to me.

What do you think it is?

Have a super Monday and thanks for stopping in! 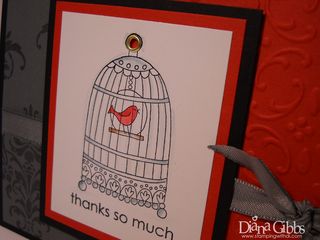 Can you believe this? One of my BFF Tracy's customers, Debbie, is in Arizona and coming to my class. Isn't that just the coolest? I mean it is not super small world cause she knew about me and to call, but still.  That she has been at a class at Tracy's and now my house...fun!  So I am totally all like gee I hope my classes are as fun as Tracy's.

This is one of the cards they are doing.  I had my first round today, and everyone loved the cards, but I think the favorite one was the little love note with the squirrel.  He is cute. 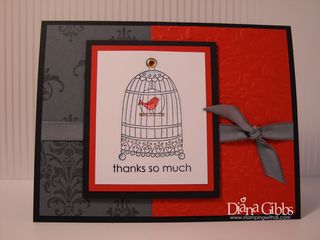 I saw a card that I got this layout from on the Stampers Showcase (it used a different stamp set and no embossing folder) and I printed it out, but it does not say who did it, and now we have a new Stampin' Connection so whoever did the card originally, thanks for the inspiration.

So Jeff and I are so bad, we are totally failing our try to lose weight this year, yesterday and today we went to Fatman's Pizza and got ribs, and other goodies, and we sat and ate like pigs.  So sad we are.  Happy and in love, but really needing to be a bit smarter on what we put in our faces.

Well I am gonna get off here, and clean up my room and set it up for tomorrow's class, and my next addiction arrived the other day...wanna see it?

...and they are crying to be decorated. I'll show ya when I get them done. 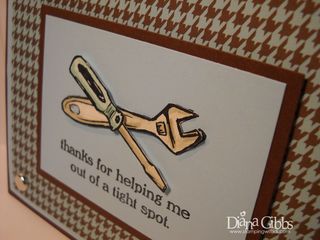 I usually try to do a masculine card in my 10/10/20 classes, I said "try", but with this fun "Totally Tool" set a man's card is easy, and I loved this new paper in the Sweet Pea DSP pack of paper, and I thought they looked good together.

My Poppa was an electrician and a carpenter, a Jack Milton of all trades really. He wore many hats in his amazing lifetime. I think he would have liked this card, and I could have given it to him many times over. I miss him every day, but sometimes Jeff will do something and I am like thinking to myself "gee that is kinda like Poppa" so I think Jeff and I are gonna be our own version of Poppa and Granny, he is the outgoing over at the neighbors guy like Poppa was, I sit home and stamp or read, like Granny did, but she knitted and crocheted instead.  Since Jeff and I will never be real grandparents like Poppa and Granny we can kinda just pretend our friends grandkids are ours too.  Well as long as they don't have boogery noses, and wet sticky fingers...blech!  Maybe I can just keep pictures in my wallet.

Let's change the topic and get to the card k? 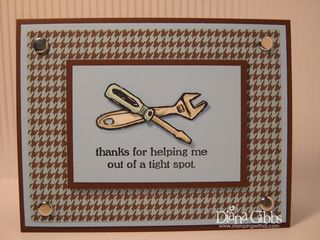 Misc: Versamarker pen, to add some shading under the wrench and screwdriver, 5/8" silver brads

I did stamp, color and cut out the screwdriver and laid it over top the wrench, and attached it with dimensionals, I just cut them skinny.

Well we are still getting rain, but the tornadoes never made it to us last night, poor Jeff I kept going in the bedroom to wake him up after the news would break from programming...heck at one point Private Practice started playing in the middle of Greys Anatomy and I was like what????  anyway I would go in and wake him up "What is south east of Cave Creek?", then "What is North of Mesa?", they said to get in the tub with a mattress and pillows, and then I am thinking ugh... I need to clean the tub.  But thankfully Poppa was looking out for us, and we didn't need to clean get in the tub.

Jeff just keeps grumbling about the weeds that are gonna be coming as soon as all the rain is gone and the sun comes up.  Ugh! One year they were waist high.