Those of you that know me know that I love Ryan Shupe and the RubberBand, I can' t remember now how many times I have seen them, I think we totaled up 9, and if we lived in Utah, it would lots and lots more.  I have a bit of a crush (which my hubby is fine with – so no one needs to get all worried) on Craig Miner, the banjo player.  Craig may even have figured it out too, as every time I see him I am like weak in the knees…ok, maybe not that bad, but anyway, he is my favorite.

So being that with My Digital Studio, you can make your cards, pages, videos, and calendars be whatever YOU want, and well you didn't really expect me to make a calendar without at least one month with my boys on it right? 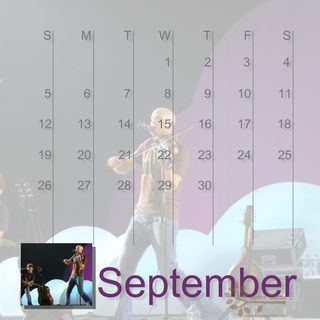 These are just a few pictures of different times we have seen them.  The big one is in Cave Creek this year, I loved the backdrop with the metal.  I was a good girl and only got my picture taken with Ryan that night, although I did buy some new duds and Craig had to go out JUST FOR ME, to get my sweatshirt, so that makes it all the more special when I wear it (all the time!) The other smaller ones are Craig and myself when they came to Mesa a year or so ago, that was fun, we were in the front row.  Poor Ryan had just had his appentix removed the DAY BEFORE and still flew here for the show with his hospital band still on.  He was in lots of pain, but as usual the show was phenomenal, you really need to check them out if they come to your town.

The calendar picture is from Convention a few years back.  A few years before they played at Convention I had emailed Stampin' Up! about having Ryan Shupe and the RubberBand (RS&RB) and told them they should really look into having them come play, I mean heck they are a local Utah band that sure would make it hopefully cheaper cause they would not have too big of a travel expense.  So the following year, (it was when we had the split conventions) my SAM Brandon called me and said "You are gonna love the entertainment" and I was like "Is it Ryan Shupe & the RubberBand?" and he would not tell me.  So when I got there and the stage was set up with banjos and violins, and mandolins, I almost peed my pants. BUT it was NOT them.  It was however Peter Breinholt, Jon Schmidt, and a bunch of other musicians, one of those being Ryan Tilby who is now with RS&RB. They were totally awesome, and I did love it.  So the next year it was coming up to Convention and it was still the two split sessions, I think that was the last year we did that…thank goodness. So I always see where RS&RB is playing and I noticed that they were going to be in Colorado the same time as we were for Convention, so I emailed their manager guy and asked him if they were going to be playing at the SU! Convention and he emailed back and said "YES" OK I will admit, I screamed like I was being murdered and I think my right eye popped out, but I did finally calm down.  I went and changed my pants, fixed my eye, that crystal effects is a miracle glue I swear (only kidding), and then I told my BFF Tracy.  So that year Tracy and I went to the second session, but had plans to go in a day or so early.  So we were bad and snuck in and watched RS&RB on the first session entertainment night, and saw them again for our session, so we saw them twice.  Come on…you had to know I would right? I love them that much. But you are saying oh but you stayed in the back so no one saw you right? Well no, actually we were right up front…both nights…ha!

As you know from my Johnny Cash experience,  I blame my folks for being kind of a groupie when it comes to the RS&RB, so I can't be held accountable for anything I do, it is all my Mum and Dad's fault.

I love the little squares at the end of each post cause sometimes if I am looking for something posted before they will help me find it, I was trying to find my Johnny post and I just had to look a few places and there it was.

Well I hope you have enjoyed this not so short story of where the pictures came from for this month's calendar page.  I love these calendars, and the My Digital Studio is the bomb!

Have a great Monday…Tracy is getting in today!  So you may hear some screaming in the Phoenix Airport around noon!

Those of you going to Leadership and Regional make sure to stop and say hi!  Whip out your name tag cause this old broad is better with faces then names.  I won't even attempt to pretend I am not.