Well the owl was gone for about a week maybe, once we got all the rain and wind, and he came back today. I am so happy!  I wonder where he was all that time?  Glad he feels comfortable here at our place.  I think it is cause we left everything natural.  When we had the house built 12 years ago we told the builder we didn't want them ripping up trees.  We had the builder mark the trees that had to be taken down and we cleared some and they did too.  We also marked trees that we hoped they would leave, so it worked for all of us.  Some of the other builders in the neighborhood, they came and totally cleared the land first.  Why they do that I don't know.  That is why we have so many trees and stuff, cause it was here already. So the rabbits, prairie dogs, lizards…and the owls…and ugh…yeah even an occasional snake…feel safe here I guess.

OMG! Did I ever tell you the spider story?  When we were having the house built we came out every weekend to check on it, and clear brush and stuff, and one time after it had been stuccoed the builder said if we could hose it down when we came out it would help it not dry so fast.  So one other time I had noticed these holes in the dirt and I asked Jeff what they were and he said spider holes, and I thought hmmm..big enough hole.  I just assumed it took over a hole from someone.  So anyway, as we were hosing the house, I was washing off the back patio and the water was going into this hole and all of a sudden a TARANTULA crawls out, it was the size of my hand, and I freaked. I was screaming, and Jeff was like "I told you it was a spider hole"…don't you think he could have said tarantula?  So anyway after we moved out here, when we would walk out at dusk you would see all these tarantulas scurry to their holes.  They would come out to eat at night.  Now that we have been here for a while, I have not seen one for years.

I did have a picture on my computer…I think you all know what they look like though…no need to frighten anyone so I get that awful unsubscribe notice "content no longer relevant" – ha! 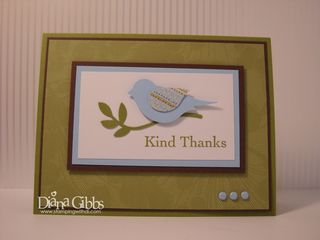 I don't think I have shown this card yet.  It is not an owl, but it is "owlfully" cute.  I am going to do a class where everyone coming gets their own Two Step bird punch, let me know if you want to attend.

So American Idol tonight was odd, I think we only saw like 3 people get picked but they found 12 or I don't know how many to go onto Hollywood.  The first guy was so oily looking, and I don't know how at one point he had long hair but when he went to sing it was short, how do they do that?  The guy that was laying all over the floor and flirting with EVERYONE…that had me shaking my head, but he was more entertaining then some of them. I think he just wanted to be on TV.  Also Avril Lavigne, she was not a good judge, and please take off the devil eared hoodie, I mean it was cute at first, but then OK we all seen it already, take it off. The other judge Katy Perry, she had pretty blue eyes, she was more grown up then the rest of them, and I loved how she put Kara in her place…ha!  I can hardly wait for the real show to start and to see Ellen on there.  I have heard that her and Simon do not get along. Imagine that.  I really liked the curly hair guy they picked at the end. He had an awesome voice, other then that most of them are kind of forgettable from tonight.

OK I am getting off here for tonight, and will chat with you tomorrow. I guess we are supposed to get more rain, so I hope our little owl sticks around.

Have a great Wednesday, and thank you so much for stopping in!