So this gives you a little hint of what I demoed at Regionals. It's hip to be square!

When Stampin' Up! called me a couple weeks ago to demo I was so excited, and nervous at the same time, but after a little bit of thinking I knew exactly what I wanted to show.

We were told to arrive at 7:30 in the morning, the day of our demo, to get our tables ready and so that Tom the camera man could explain how to hold the items and how to sit and everything.  You sit on half of the chair and kinda crooked so that the camera can see, but from the audience it does not look like it.  Tom (who has been the cameraman as long as I have been a Demo so I don't know how long he has been there really) is a complete pro.  He explained how we did not want to hold the ink pad to show the audience (like we would at a Workshop) the back of the room would have a hard time seeing it, instead he said "demo like you are demonstrating to me", well that made perfect sense.  I think I caught myself a few times having to hold things different.

We had to get miked up before we went on and well the little mikey thing goes behind and IN your ear. So I had to take one of my hearing aids out.  That was all fine and dandy cause I was not talking back and forth on stage but once I got off the stage I could not hear what people were saying to me.  In fact as I was waiting to go on stage I was sitting beside Shelli and I was hoping she would not say anything to me cause I would not have heard her, so I just kept watching the video screen thing.  Thank goodness I could see the teleprompter, and read what Shelli was saying when she announced me. I still had my left one in but it was very hard to hear, maybe my left ear went on strike cause the right one was being left out, who knows but anyway, I got on stage, and I had to move my chair over to where I was sitting, and I could just see myself laying sprawled out on stage but I managed to do my demo, and I only missed a few things I was gonna say. I did not do a cheat sheet cause I had never seen anyone use one.  Little did I know that they use cheat sheets up on the top edge of the table that the camera never goes to.  When I looked out you could hardly see anything, but these bright lights. When I came off the stage I tried not to make much eye contact cause I did not want to seem rude if I could not hear people. So if you said something to me, please accept my apology.  I left my hearing aid at my table cause I was afraid of losing it or having it squawking the whole time in my pocket while I was on stage. Can you just imagine?  Yeah the blocks were great, but what was the squealing?  ha!

So let me show you what I demoed. 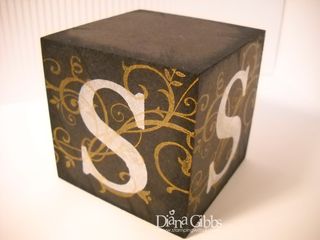 This is a decor block (the picture is not that good..sorry), I inked it all over with a Stazon Jetblack stamp pad.  Let it dry.  (I would wear gloves when you do this, cause as you spin it around while inking it up, the sides will be wet for a while) Then I used a window sheet and ran it through my Big Shot with the Serif Essentials Bigz die to make a stencil.  Then I laid my stencil on the block and I sponged with a sponge dauber platinum shimmer paint through it.  Then I removed the stencil.  Then I inked up my Baroque Motifs with my Gold Encore pad and stamped over top of the "S", and that was it…ok well I repeated it all the way around but basically this is pretty simple.

My BFF Tracy came to my house to come with me to Leadership and I had asked Jayne one of my downline if she had any of the old cello bags to show how to give the block as a gift, and Tracy said I needed to display it. So this is what she came up with…she is like that show where they use all the stuff you have and re-use it or move it around in your house…gotta love her. I must admit it looked cute. 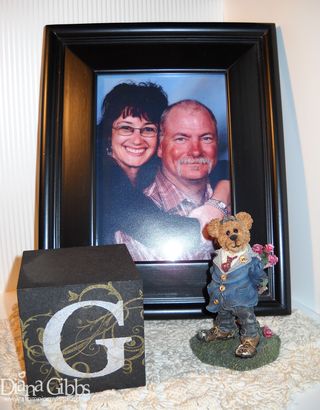 So this is the display, a doilie my Granny made (it's hard to see on the white table), a little Boyds figurine, the monogrammed block and a picture of my hubby and I on cruise one year, taken off the wall from above my desk.  I love this picture and we have not taken a new one.  We figure it looks great, and we are older now so why mess with a good thing.

Then I just showed a few more things you could do with the blocks.

I had a few of the 2010 calendars left so I covered the blocks with them, staggering the months so I can stack them, or set them side by side so that three months are always showing. 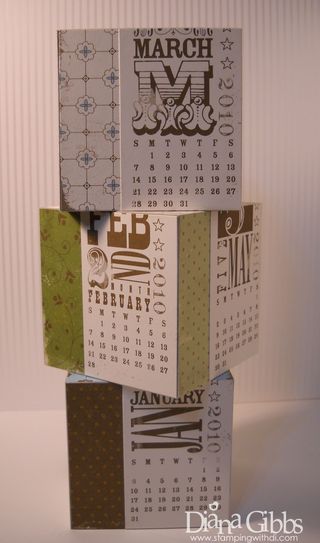 I think they turned out cute.

Then I made word blocks, these can be used all year long as you just turn the block to make a new word.  I stacked them for the photo, but I would display these side by side and I did so on stage.  In fact from the back LOVE spells EVOL and that is what people could see from the back, so I had Tom turn them, and then I had to flip them around to get them to say the right words once I got on stage…ha! At home I would display them on a shelf so you would not see the misspelled word in the back.

Here is the word HOME, this could be left out all year long.   I used the Serif Essentials Bigz die for all my letters.  I used the Welcome Neighbor DSP that is free with a $50.00 order during Sale-A-Bration.

I cut the houses and clouds right out of the DSP and mounted them on the block over the letters with dimensionals.

Here is how I showed them on stage…side by side.

Then turn the blocks, and you have the word LIFE.  This uses some of the new Sweet Pea DSP.  I cut it so the birds would show but lucked out that some looked like they were peeking out around the letters.

I used the new Extra Large Two-Step Bird punch and dimensionaled him on the "I", I love this punch, and will be doing this punch as a class, make sure to let me know if you want to attend.

Spin the blocks again and you have the word LOVE with a few hearts around, and using the beautiful new sparkly paper from the new mini called Sending Love and it is a specialty paper cause it has glitter on it. So pretty.

The last word is NOEL and I used Merry Moments DSP, and a little adhesive die cut (Merry Christmas) from the Christmas Jingle Simply Scrappin' Kit.

I loved doing these blocks and they were so much fun, the blocks come 4 to a pack so I tried to stick with 4 letter words…hey now, I chose nice words…ha!  But you could spell anything, your name, WELCOME, how cute would HAPPY BIRTHDAY be, with Happy sitting on top of birthday?  I will probably do a class on the blocks, I just need to get out my calendar and figure out what day.

Don't forget today (January 10 – for those girls on a reader) is the last day for my No Tax, No Shipping Special, maybe you can order some blocks and DSP, and make your own words.

Well I am gonna hit the hay as I am beat.  Tracy leaves tomorrow and I am so sad that our time went so quickly.  I will post more about Leadership in the next day or so, I met so many nice people, it was great to make some new friends, and see some of the old (well not OLD, but you know what I mean) friends too.  I am so happy that so many of you stopped me to say Hi, I love that about Stampin' Up! we are all connected, and it was awesome to put faces to names.  I am sending you all a big hug.