Tonight was Eric's Christmas Party from his work.  We have been so blessed to have Doug and his wife Shelli in our lives.  Doug owns a company called Central Arizona Council on Developmental Disabilities. This is where Eric works every day.

I took this right off their website to tell you a bit about it:

The Central Arizona Council on Developmental Disabilities is a private non-profit organization dedicated to providing service and advocacy for individuals with disabilities and their families.
Established in 1982, the goal of CACDD is to increase personal independence and productivity while promoting community acceptance and integration.
This is accomplished by providing support, education, advice and a number of direct services.
The vision and commitment of CACDD is driven by the council members, all of whom are persons with, or family members of those with disabilities.
The activities of CACDD bring staff in contact with all major service delivery systems, including the education system, human services providers, the judiciary and law enforcement systems. CACDD works to assure that individuals with disabilities and their families are afforded dignity, equal opportunity and access to all appropriate services.
CACDD has been successful in new program development and has extensive experience in program management.
Some of the new program development has included parent support groups and vocational related services.
Our commitment has and will remain issues effecting the developmentally disabled population.

So they had a nice dinner and entertainment at Gold Canyon Ranch, outside in this beautiful tent.

This is just a few of the people that were there. It was a full house tent.

So Eric was totally in his element hanging out with his friends, mingling with everyone.  In fact Eric said "I'm gonna go see Kenny and Mike" and I said "OK", and then he leaned over and said "if that is OK with you guys", and I laughed so hard, cause it was the tone of voice he used. Like he was hoping we would be ok sitting there if he left us, cause he was off with his friends.   Once the music started people started to dance.  So I asked Eric if he wanted to dance, and he said it was too crowded.  About 3 minutes later a girl comes over and wiggles her finger to Eric to come dance with her, and off he goes.  I told Jeff "well I guess it isn't too crowded after all!" 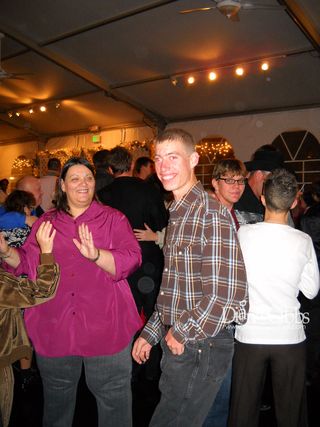 Here is Eric dancing, he is so handsome. I guess I am a little bias though. He got his hair cut today, and some of the people didn't recognize him.

There was a band on before Elvis, and then on came the King all glitzed out in red.  Eric went over and shook his hand at the end.  He had never met Elvis before.  We explained he didn't really meet him this time either, he said he knew…ha!

It was a great evening and we could not be more proud of our boy and how he has turned into quite the young man.