That is what I keep telling myself.  Why? Cause today my monitor died.  I have been having issues with it for a couple months, it did not want to turn on so I had to unplug it and plug it in every morning to get it to come on.  It got to be where I was scared to turn it off, so I left the computer run all the time. I would re-boot once in a while quickly, but not leaving it off for any length of time.  So today in the middle of something. Poof! It was gone, no picture, nothing.  I unplugged it like I used to. I could see it fluttering off to the side like it was trying to come on.  I tried everything, and nothing.  I called the computer place I take my computer to and asked what they charge to work on monitors and he said they don't. It is cheaper to just buy a new one.  So I looked on line, talked to my sister Jax, she is my computer guru, and she gave me some brand pointers.

I headed over to Walmart, I had to pick up stuff for my downline shoebox/potluck anyway, and I looked at some of their monitors.  Then I headed to Costco, and found a great deal on a 24" one.  It didn't look that big in the store, and I had a 19" one, so that didn't seem much bigger, till I put it on my desk…holy moly.  I can read from across the room, now to get Go-Go Gadget arms and I could type from across the room too.

So I say (being the Pollyanna that I am – NOT) at least it happened in December so that it will be a business expense for this year and not have to wait till next year.

I got up early to watch the Today show. Shelli (CEO & Co-founder of Stampin' Up!) was gonna be on there for the Toy Drive, and I was reading emails with other Demonstrators and I finally found out that she was not gonna be on till the Hoda and Kathie Lee hour, and I was like what?  I had two freakin' hours.  I headed to UPS to drop off my Leadership displays and a pack of cards I sold through my Etsy store.  I get back home, and then find out she is not on till right at the end.

I swear if Hoda and Kathie Lee did not goof around so much perhaps Shelli would have gotten more then a few words out.  Here you can see it for yourself…don't blink. I think talking about the Toy Drive was more important then their craziness in the kitchen, or the last part of the show they showed stuff that happened during the week, more of their silliness.  I see why I never watch the show, in fact if I have the TV on and they start to announce the show as soon as they say Kathie Lee's name I change the station, just in case they have a sensor that can tell that I am changing the station.  She drives me NUTS!

So anyway I had to get my swap done for tomorrow, it is a shoebox swap, so I just have to have all the stuff cut and ready to go. That won't take long.  Tomorrow afternoon I will start cutting calendar kits, so I can get them in the mail next week.

Wanna see my swap card? The swap theme was Spring or Summer. 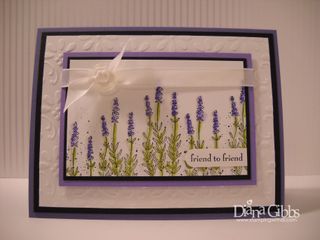 I love this stamp set!

Well I have to get my 12 Days of Christmas email ready, and tidy up my studio.  Running around on a monitor hunt cut into my time at home today.

Oh and did any of you watch the Series finale of Monk? It was so good, and I loved that show. I will miss Tony Shaloub.  The whole vomiting followed by death had me laughing so hard.