…ok it won't be that bad, but it might be long.

Yesterday was so much fun.  Sean came and picked up Eric, and they were gonna do a bunch of stuff and go to the fair and Eric was gonna sleep over.  Sean and Gina have a respite house and Eric goes there when we go on vacation or something.  Eric works with both of them so they all get along really well. Eric called us while we were at the rodeo to see how Jeff was doing.  After we got off the phone I told Jeff that if Eric ever moves out (which I hope some day he does, cause isn't that every parents dream to have an empty nest), but we think that if he does it will be hard on him, cause gosh he misses us when we are not with him for a few hours, and it will be such a change for him and he does not do well to change.  We miss him too, but when we know he is in good hands, it is easier.

So anyway, I lost my track of thought.  As we got close to the rodeo grounds, I texted Mandy, cause she lives up there to tell her we were close, and she was gonna come snag me to go to lunch and hang out. So I pinned on Jeff's number (which was 30) I was like oh man I hope you didn't get number 13, and he said no……come to find out though when they were handing out the buckles, the guy with number 13 won All Around Cowboy and it was like 15 years in a row or some crazy thing…ha! Thank goodness he didn't know how unlucky that number was…it could have been a disaster.

So I was there a bit, visited with my girlfriend Terry (Lee's wife) and then Mandy hollered at me and said she was there, so I walked to the parking lot and she picked me up and off we went.  It was perfect, I mean she lived like 9 miles from the rodeo grounds.

So we went to lunch. Don't we look happy? I cropped out my cowlick (I had to explain a cowlick to Mandy, she thought I was saying I had colic) It's that Canadian accent.

So we ate and visited and then went back to the rodeo.

Jeff, me and the cowlick…..I can pretend it was the hat doing that to my hair…but lets not lie, we know the truth,  I do love the picture though, aint Jeff a handsome bugger?

Here is Armando and Jeff, they used to work together, now Armando is in a different department. They clean up great eh? We have known Armando a long time, he is like family.

Then it was time.  They were calling for the Ribbon Roping so Jeff and Armando took off. They were the wrestlers or whatever it is called.  Jeff and Lee went before Armando and his rider.

They did great, and Jeff did not even get dirty or anything, usually he has to get the bull on the ground but this year was better.  He brought a change of clothes for the concert later, but didn't need em.  What concert you ask?  Oh well keep reading…ha!

So Mandy and I took off again to go to Target and to grab Jeff something to eat. 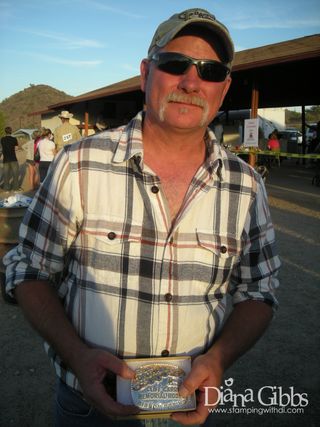 When we got back the rodeo was over and they were gonna start handing out the buckles.  Jeff and Lee got third place for the Ribbon Roping.

They each got a belt buckle.  Jeff even said I could have it.  That means I need to get  a new belt, I don't have a belt that you can change the buckle. Plus I don't think any of my belts even go around my waist anymore.

So after the rodeo was over, the excitement continued…off we went to Cave Creek Coffee Company to watch Ryan Shupe and the Rubberband.  I got an email from them a week or so ago that they were gonna be in town, so we got tickets that day. We had ordered our tickets on line and were to get them at the will call window.  We got there around 6pm, and the doors did not open till 7:00, I went to the will call window and she said I would have to wait till 7 to get my tickets cause the only tickets she had were for the people that called in to get them instead of doing it online.  Well crap, now we would be fighting for a seat I thought. It is just a small intimate venue, but at the time did not know how the seating was.  Jeff said that when he went to get water they were letting the people that had called in for their tickets back already, and I was like WHAT?  So I said I would go see if we could go back earlier. So I went back to the lady and I said "are the seats just open seating" and she said "yes", and I said "is there anyway we can go back now?" and she said "the people going back had reserved a table when they called in for their tickets, how many are in your party?" and I said "just me and my husband", and she said "let me go see if there are any tables left" so off she went and came back "she said we have one table left, do you want it?" and I said "YES", so she said "go get your husband and we will go back". So I went and got Jeff and as we were walking back Jeff said to her "did she sweet talk you?" and the lady laughed and said "oh yes!" but I really didn't, it was just dumb luck I guess.

So she took us back and it was so quaint and the tables were all set up along the one wall, and then you could see the regular seating and even like a small bleacher kinda place. I think it holds 250 in total.  So we sat down and we ordered a pizza, it was delicious, Jeff got a beer, I had some tea, and we even ordered a dessert, and we got to sit there ALL NIGHT!

So by going in early we got to listen to my guys Ryan, Craig, Ryan, Bart & Roger do their sound check,so it was like an hour more of music kinda. 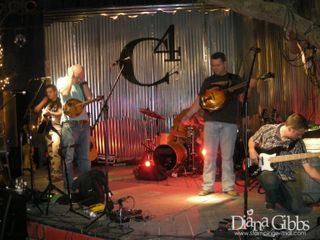 Here they are, I love this pic, busy at work. From left to right.  Roger, Ryan, Craig and Ryan…you can't see Bart he is behind Craig on the drums. 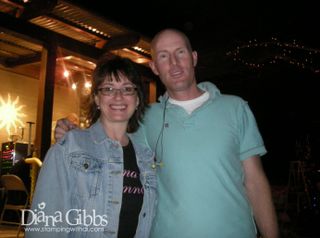 Jeff and I chatted a bit with Ryan, and here I am with Ryan…he is so nice, and I teased him and told him he got his Creeks messed up. We are QUEEN Creek, not CAVE Creek, that is about 120 miles round trip different…ha! but they were worth it and that the rodeo was in PHX this year instead of Gilbert made it even better. Ryan wants to come back to Queen Creek so he said to see if I could make it happen, so I am gonna make some calls. Wouldn't that be awesome if it works? Maybe that dumb luck will happen again.

I was also excited that they got some new duds, so I asked Craig (my banjo boy) if I could see a medium Shupe Hoodie and he went out to the trailer and brought ME one.  Aww, so sweet.  So I got me a hoodie (hand picked by Craig), and a tshirt, and a couple bumper stickers. This time Craig asked for MY autograph..cool eh? Of course it was on the credit card receipt but that still counts right?

My Banjo Hero shirt, it might be for a guy or a kid, but I don't care when it comes to RS&RB, I will wear whatever they sell. Ha! 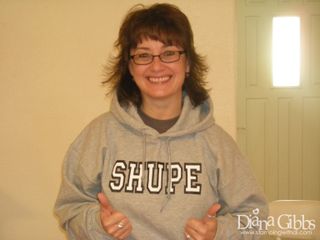 This is my favorite, I give it a two thumbs up!  I totally needed it last night it was cool at the venue, as it was outside under the trees, but they had like big sheets like an awning over head, but you could sill see the sky in places and it was cool, I had my jean jacket on my legs.

You really need to go see these guys in concert, they play instruments like they are part of their bodies, at one point Ryan is playing the Devil went Down to Georgia, his fingers are flying on the fiddle and he is jabbering away at Tilby (the other Ryan) his fingers know the song so well that he does not even have to pay attention. The song that originally got me as a fan was Dream Big, I had called the radio station to ask who was singing and they told me.  Then they warned me that the rest of the songs were different sounding and I was like what the heck did that mean. But I bought the CD and the rest is history, they have been my favorite band ever since and I think this was the 9th time I have seen them. Here is the video for Dream Big but I think it will make you click through to YouTube to listen…do it, it is a beautiful song.

This is when they had a different bass player named Colin, then Ryan Tilby came back.

They are actually busy recording new songs for their new CD, and they sang some last night, awesome as usual.  I love these guys, and can hardly wait to see them again.  I wish Poppa was still alive and I could take him, he would love them too, he played the fiddle, and he played by ear, Poppa was a social butterfly so I am sure he would have been chatting with them by the end of the night.

Well I better stop blabbing, Jeff is calling that supper is ready.

Have a great Monday and thanks for stopping in.