So the other day I put polish on my nails, a pink color.  I get it all done and after it is dry I notice dang little bumps all over my nails like bubbles.  Anyone that knows me knows I am a freak for perfection stuff, (you wouldn't know it by my messy house though…ha!) so I took it off and tried it again.  Same thing.  So yesterday, I bought a basecoat/topcoat thing and some speed dry stuff, I turned off all the fans, and took my time.  It happened again, by this time I am thinking it had to be the dang polish.  So I was outside with Jeff complaining about my nails, and he said "it is not your color, that looks like something my Grandma would have wore", so I was like grrrrr………..so off it went and I put on some OPI polish (the other was a cheaper polish). So now I have on Sapphire in the Snow, which is a dark purple.  After I put it on Jeff was like "now that's more like it"…and NO bubbles…the other polish is in the trash…you get what you pay for.

While I was at the store getting all the thanksgiving food the other day I also picked up the movie Star Trek and we watched it last night. OMG! I have not seen such a good movie in a long time…well not comparing it with New Moon cause that goes without saying.  But Star Trek was amazing, it was funny, action packed, suspenseful, and the people playing our old favorite parts were perfect. I was not a Star Trek fan…well let me take that back…Star Trek was not a show I usually watched, but when I did, I enjoyed it. So if you want to see a good movie, totally get it. I know I will watch it again and again, and it makes me want to see some of the old shows.

So how about another button card?  I think I am gonna start adding cards I have done for my blog into my Etsy store, that means there will be one available, cause I only do one for blog posting. Class cards are different as sometimes I get to make multiples of them.

I have another idea for a button card, but I might take a break for a bit on them.

Don't forget today to check out the Online Extravaganza, shop from home and you don't have to fight the crowds. Sale ends November 30.

Today when I took Toby out to go potty when he walked by this cactus thing (I think it is aloe vera plant) a hummingbird flew out of there and into the tree, so I kept watching, and after Toby went away from there he flew back and sat on some of the dead cactus things by the ground.  I have never seen a hummingbird sit so low to the ground.  So I went to get my camera, and he let me get right up to him to take his picture, I think there might be a nest in there or something. 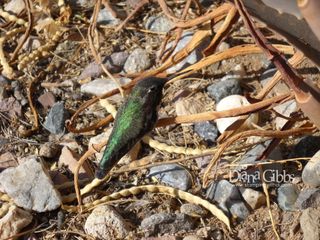 Look at the pretty green color he has…or maybe it is a she.  There were a bunch flying around tonight while we sat outside.

Ok, well this girl is getting off the computer, today was a nice quiet lazy day, I cooked, ate, read, napped, read, napped, ate…but tomorrow it is back to work.

Have a great Black Friday…and if you are brave enough to get out there and shop…have fun!