When I got up this morning, I threw on my robe and went out to the kitchen, Jeff was coming in the back door with something in his hands.  He said "it's a hummingbird" …well that is what I think he said, I didn't have my ears in…but anyway, he was holding a hummingbird, seems that two of them collided in mid-air.  So I told him I would take some pictures of it. 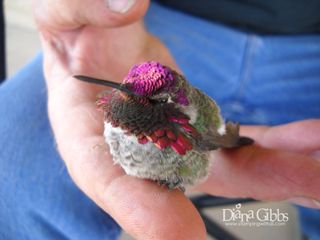 Look how pretty the pink/purple color is on it's throat, and head, and it would look different whatever angle you were at. 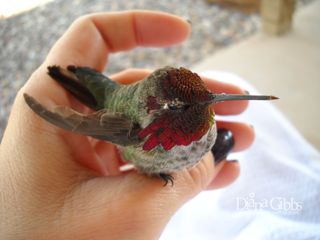 He seemed so fat and poofy.  He flew off and that other hummingbird that he/she collided with came after him again, so he went to the ground, so I went back and picked him up.  He still seemed groggy, and dizzy from the collision.

I was pretending he came from PA, perhaps even my BFF Tracy's yard and he flew here and was so tired, and the other hummingbird is one that lives here year round and did not want to share his yard. 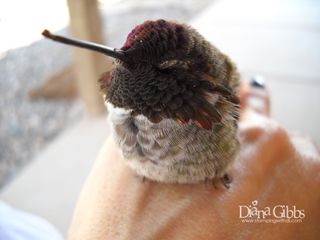 He is so puffy, cause he has his winter coat on for that cold fly from PA.

I took some video, and it is so cool cause when he flutters his wings you can hear them, and they do hummmm….

Did you hear the humming?

So the other hummingbird kept hanging around, and Jeff said to take this little guy in the house.  So I took him into the house, and Jeff went out to get some sugar water from their feeder, and look at this…I was amazed, and never in my wildest dreams would I have thought I would ever feed a hummingbird.  He was licking and licking and his tongue was so quick, finding every drop off my finger.  I wished Tracy were here cause she loves hummingbirds more then I do. She would have definitely peed her pants!

Just ignore my talking, like I said I didn't have my ears in and Jeff had never used my camera before and I was making sure it was taking the picture, cause it is easy to think you are video taping and you are not. He did pretty good.  How cool eh?  Look at that tongue! Too funny, you can see my robe, it says Holland America Line.  I demonstrated on one of the cruises, and Stampin' Up! gave me a monogrammed robe as a thank you, it was laying on my bed that night.

So after he ate, I held him a while longer, and then he flew off my hand in the house and went towards the light of the blind and sat there, and I thought he would get hurt, so I went and got him again, and took him out front so he was not by the one in the backyard.

Here he sits in the bush, he sat there a while, and then he got himself all flattened down, like you usually see them…not all puffy, and then he flew to another bush, and I went back in the house, when I came out later, he was gone. So I am gonna hope that he was all better, and will live a long life.

Have a great Saturday,and thanks for stopping in!