Well I promised I would show more pics from last nights fun. I think that today I am paying for all that sugar I ate…ha!  I had class this morning, and then this afternoon I have had a migraine so have been laying down…ugh! 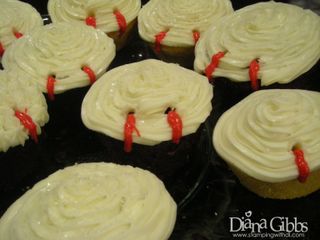 So my new girl pal Mandy made up some scrumshious food, I think she did the spinach dip that goes in the bread bowl..I love that, and she made some fun muchies with chex and chocolate, and then she made these cupcakes FROM SCRATCH, and then she decorated them there, don't you love it?  You can't see how they sparkle, but look they are Bitten!! Ha! I bit into one and ate it all up.

Then after we visited and ate and ate some more, MAMMa had prepared some make n takes for us, so we sat and laughed and stamped, some of the girls even stopped stamping to go watch the first show for Vampire Diaries, I mean we can't get enough I swear.

So here are some of my fellow fanpires, Monica, (who brought this bean layer dip that I need to make, we love it and I forget about it) MAMMa and Melissa (Mel and I go way back with the vampires – we were into vampires before they were cool!) years ago I whipped out my vampire teeth at a class (after everyone had left) but Rachelle and Mel were the only ones here, and OMG someone else was here too….I think it was Connie? but what a great first impression I made on Rachelle and Connie…ha! Mel already knew me, and still calls me her friend anyway…ha!

Here is Rhonda (a.k.a Edward), and Kimberly. You might have to click on the picture to see how Rhon "sparkles". 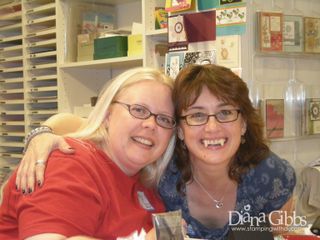 Mandy and I, she is so much fun, all these girls are, you know how you just click with people, I mean we all have stamping and vamping in common, but we also enjoy hanging out.

Mandy is the cupcake extraordinare. (my spelling is way off – forgive me)

Here is Jen and I, (my sister from another Mother, but that Mother is MAMMa so would she then be my sister?) she played the human, she didnt want any bite marks cause she has little sweet girls and was afraid it might scare them when she got home. 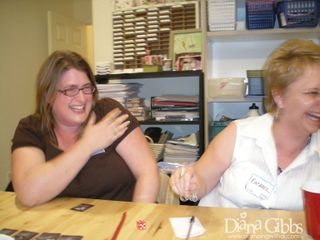 After we stamped then we played the Twilight game.  Now I re-read the book hoping to help me with the game only to find out the game is based on the movie, and I did not watch it super recently.

Plus we all were not impressed with the game, I mean some of the questions were, close your eyes, and tell the hair color of everyone playing the game…or how about everyone write on a piece of paper who is the luckiest person playing the game and if the ones on the roll are right, they win that roll. What does that have to do with the movie?  Stupid eh?  We eventually just stopped playing and Kimberly just read out the trivia questions and we answered, why the game was not simple like that I don't know.  We were wondering what the people that invented the game were smoking when they invented it and perhaps it should have been included with the game so we could figure out the freaking rules.

So this had to be one of the funniest parts of the night, I don't know if it was the sugar, the lateness or the giddiness of all the girl fun, but basically Rhonda (who is sparkly and playing Edward) did something I can't remember what, so then Mel smacks her on the arm, and then Rhonda was like "that broke your hand didn't it, cause I am stone" so we were laughing so hard…now notice Kari in the front, she is the game rule leader (they called her something else, but I don't want to say it on here), and she is trying to figure out what the heck we are doing…roll two dice, subtract a point, spin in a circle, quack like a duck…you get the picture….ha!

So hopefully you have enjoyed my little trip down memory lane as I remember a fun night of Twilight-ness.  We can hardly wait till New Moon, we are all going.

Don't forget to get your Color Challenge card posted today by noon, so I can pick a winner! Cathy, I am still trying to find out where I found this bedroom set online….I changed the name of the pic, so I can't remember.

Have a great Sunday, and thanks so much for stopping in!